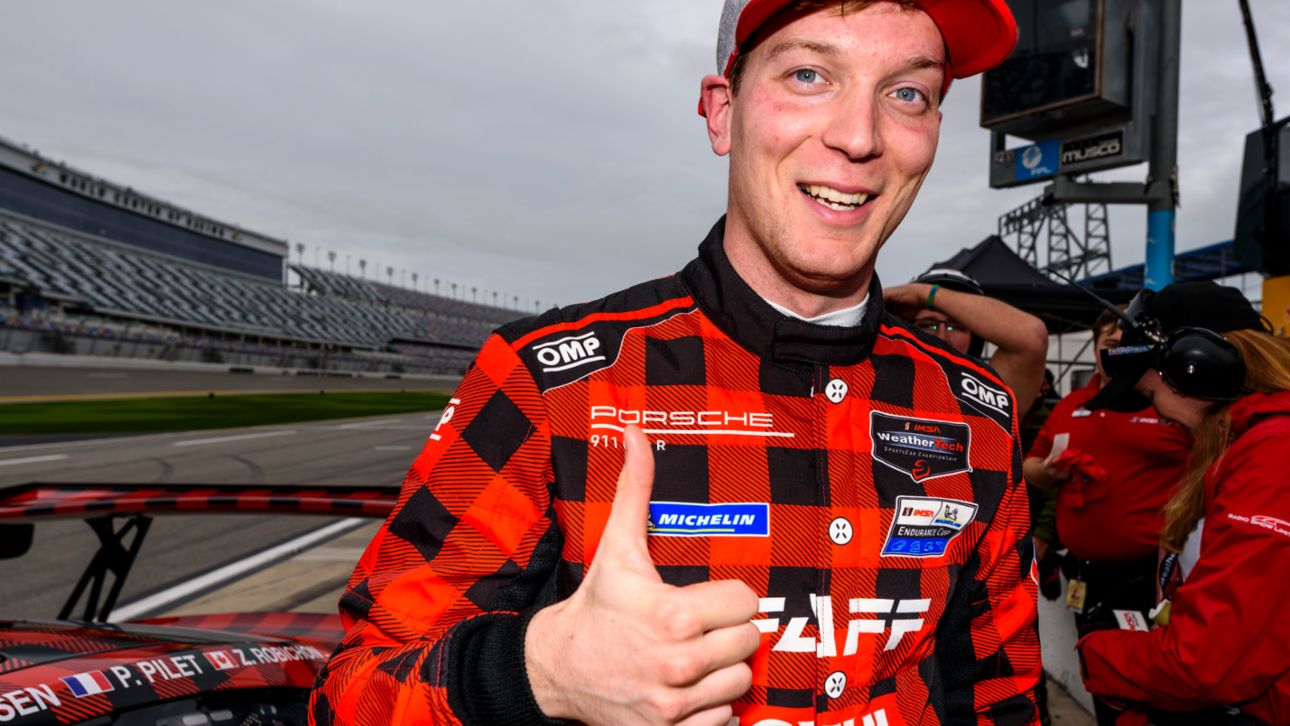 One of the primary goals of both the North American Porsche Motorsport Pyramid and the North American Porsche Young Driver Academy (PYDA) is to offer young talent the tools and a step-by-step plan to work from novice to professional in the auto racing. Few have made that progression is cleanly and as successfully as Canadian Zacharie Robichon. Robichon, a 2017 PYDA graduate, used those tools to earn his first IMSA title, the IMSA Porsche GT3 Cup Challenge Canada by Yokohama platinum championship in 2018. He then scaled the next step on the Pyramid to join the IMSA WeatherTech SportsCar Championship to win the WeatherTech Sprint Cup in 2019.

Robichon took the ride with Pfaff Motorsports, who, like the former open-wheel racer, was progressing through the stages of the North American Porsche Motorsport Pyramid as an entrant. The Canadian Porsche dealer began its exploits at the base of the Pyramid working with its clients and moved into a perennial favorite in the Porsche GT3 Cup Challenge Canada. They moved with Robichon and fellow PYDA graduate (class of 2014) Scott Hargrove (Canada) to the WeatherTech SportsCar Championship GTD class with a Porsche 911 GT3 R in 2019. The program won twice last season, first at Lime Rock Park and then at Road America.

As with most racers, the Robichon started his career karting. He first entered into the Porsche Motorsport world in 2016 in the Porsche GT3 Cup Challenge Canada by Yokohama series. This Porsche one-make series focuses on skill development with all drivers competing in the 911 GT3 Cup. In his rookie year, Robichon finished third in the championship. The following season, he showed his continued progress and improvement as a driver as he finished in second-place for the year. The same year, 2017, he was invited to the PYDA, where he received coaching and mentorship on engineering topics, on-camera interview and other media training, personality assessments and a full day of seat time in a Porsche 911 GT3 Cup car to sharpen and broaden his skills behind the wheel. Following his trend in the Canadian series, Robichon entered 2018 racing for a third year and was crowned the champion after a nearly perfect season, winning 11 of 12 races.

"Ever since I was young, I’ve loved the Porsche brand."

With a Porsche one-make championship under his belt, it was time for Robichon to progress to the next level of his career. He entered the 2019 racing season as part of Pfaff Motorsports’ IMSA WeatherTech SportsCar Championship effort in a Porsche 911 GT3 R. In his first year of open competition, he helped bring the team back-to-back GTD class wins at Lime Rock and Road America. Pfaff Motorsports did not enter the Detroit Grand Prix round, but Robichon didn’t see the weekend as time to rest. He joined forces with Porsche factory ace Patrick Long (Manhattan Beach, California), a mentor in the PYDA, and Park Place Motorsports and helped drive their No. 73 Porsche 911 GT3 R to a second-place finish after putting the car on pole position. The combination of three podium finishes throughout the season added up and Robichon went on to be the first driver crowned the IMSA WeatherTech Sprint Cup Championship Drivers' title. In the process, he gave Porsche the Manufacturer’s trophy for Sprint Cup in the championship within a championship’s inaugural season. The WeatherTech Sprint Cup is awarded to the driver, team and manufacturer that performs the best in races of less than four hours.

In 2020, Robichon is continuing to race for Pfaff Motorsports in the IMSA WeatherTech SportsCar Championship. The team’s “Plaid Porsche” has quickly become a fan favorite. In the season-opener at the Rolex 24 at Daytona, Robichon set a record lap to start the team from the class pole position. Once the racing season resumes, Robichon, teamed with Dennis Olsen (Norway) for the full season as well as Porsche Test and Development Lars Kern (Germany) in the endurance races, is definitely targeting the GTD class’s outright championship to continue his progression of titles.

The North American Porsche Motorsport Pyramid guides drivers from club racing, through one-make series, to open competition and beyond. At the base of the pyramid is club racing, the foundation of motorsports. Club racing, including the Porsche Club of America (PCA) and Porsche Owners Club (POC), provides a safe, clean and fun environment for drivers to compete around the country in their Porsche road cars and race cars. The next natural step from club racing is a Porsche one-make series, such as the IMSA Porsche GT3 Cup Challenge USA by Yokohama. In one-make series, equal opportunity meets self-belief as amateurs line up with the pros. Staying true to the motto “May the best driver win”, everything is centered on the individual driver’s skills. The parameters are clear: the teams use the exact same vehicle. At the peak of the pyramid is open competition racing. Open competition bridges the divide between customer and works racing. Here, top-class athletes battle it out against other manufacturers in various racing series worldwide. For Robichon that means the pro-am style GTD class with the GT3-specificaiton Porsche 911 GT3 R. The 510-hp machine was introduced in 2019.

Zacharie Robichon, Driver, No. 9 Pfaff Motorsports Porsche 911 GT3 R.
“Porsche GT3 Cup Challenge allowed me to learn about the dynamics of pushing a full body car to its maximum. It provided us with an extremely high level of competition everywhere in North America, competition that allows us as drivers to keep pushing and learning our limits. The level playing field that is brought on by a spec series allows us to know that if we are successful here, we can be successful anywhere."

"It was a special feeling to win the Sprint Cup Championship. At the beginning of the year it wasn’t even on our radar to pursue it. Halfway through the season we saw it was achievable and, as a rookie, I wasn’t sure it would be possible. Once it was accomplished, I was almost in disbelief! It was a great feeling to be able to get the championship for myself and for Porsche in the first year of the new 911 GT3 R.”

"Ever since I was young, I’ve loved the Porsche brand. When I first got the chance to race a Porsche in GT3 Cup Challenge I was truly living a dream. Now, to be able to continue on my development with Porsche and to represent the marque in the WeatherTech Championship, is something that I only could have dreamed of a few years ago. If it wasn’t for the support of Porsche and their one-make series, I would likely not be where I am at today.”