The Porsche Mobil 1 Supercup Virtual Edition is ready to tackle its first virtual season with an impressive line-up of 31 drivers. VIP vehicles driven by well-known professional racers will join the teams and drivers that have officially registered for this year’s real Porsche Mobil 1 Supercup season. The season opens this Saturday (April 4) with a double-header event on the virtual version of the Spanish Circuit de Barcelona-Catalunya. Action gets underway at 10:00 a.m. EDT.

“The Supercup is the pinnacle of Porsche’s one-make cups. I’m delighted that we’ve managed to come up with a great alternative under the current circumstances with no real motor racing. We have a top-class field and I’m very excited to see who’ll perform the best on a screen,” says Oliver Schwab, Project Manager of the Porsche Mobil 1 Supercup. The eleven Supercup teams compete with a total of 22 fulltime drivers, among them the two Porsche Juniors Jaxon Evans (New Zealand) with Momo Megatron Lechner Racing) and Ayhancan Güven (Turkey/Martinet by Alméras).

The first event of the Porsche Mobil 1 Supercup Virtual Edition will be broadcast via live streaming on www.porsche.com/virtualPMSCBarcelona. Commentary for the event will be provided by the former Supercup driver and current Eurosport expert, Jan Seyffarth. Sport1 also reports on the virtual racing series and televises the first two races live on Saturday on www.sport1.de. Moreover, the German television channel will air selected highlights on Sunday. Eurosport broadcasts live on www.eurosport.com and selected local websites – for example Germany, France, Great Britain, Italy, Netherlands and Spain. The TV station Ziggo Sport covers the virtual one-make cup in the Netherlands. Furthermore, the Porsche Motorsport Hub, the Porsche Newsroom and the Twitter account @PorscheRaces keep fans up-to-date with information about the Porsche Mobil 1 Supercup Virtual Edition.

Last Sunday (March 29), contestants had the chance to take part in a nine-hour test on the Circuit de Barcelona-Catalunya. The fastest time of the day was set by Porsche Junior Jaxon Evans, with the 23-year-old lapping the virtual circuit in a time of one-minute, 47.738-seconds. The Luxembourger Dylan Pereira (BWT Lechner Racing/1:47.870 minutes) and Larry ten Voorde (Team GP Elite/1:47.906 minutes) from the Netherlands rounded off the top three.

The Porsche Mobil 1 Supercup Virtual Edition utilizes the iRacing simulation portal. The calendar consists of four events – each with two, 25-minute races. The first double-header round on the Circuit de Barcelona-Catalunya is followed by three more meetings at the Silverstone Circuit (Great Britain, April 18), the Circuit de Spa-Francorchamps (Belgium, April 25) and the Autodromo Nazionale Monza (Italy, May 16). 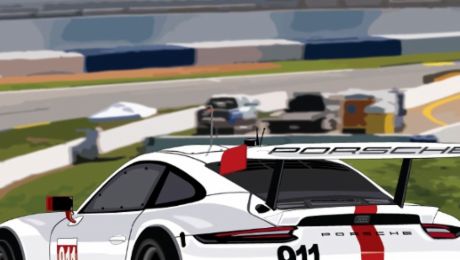