A glorious, colorful mixture: the different liveries of the 917 models

Colorful stickers and paintwork are as much a part of Porsche Motorsport as the boxer engine. In the latest episode of the Porsche Top 5 series, the company looks back on five historical color combinations of the various 917 models.

The 917 KH variant debuted at the 1970 24 Hours of Daytona road race and made an immediate impact on the track. Adorned in a Gulf livery now as iconic as the sports car, the 917 short-tail, kurzheck, breezed to an impressive 1-2 finish to earn the model its first endurance victory.

To mark the 50th anniversary of the Florida win, Porsche Top 5 looks back at some of the 917's best colorways.

The first is a true number 1: the car with the body number 917-001 was a demonstration car completed just two days before the 1969 Geneva Motor Show. To mark the 50th anniversary of the 917, cutting-edge 3D technology was used to restore this model to its original condition, complete with the green and white color scheme.

Number 4 in the ranking is a gem: the 917/20. Better known under the nickname “The Pink Pig," the racing car is more than 9.5 inches wider and underwent further modifications to improve aerodynamics. The reworked body inspired the designers in 1971 to give the car a pink finish and apply markings that show cuts of meat.

The number 3 in the ranking also dates back to 1971: the Porsche 917 “long-tail” with Martini livery. One year earlier this racing car – at that time still bearing a psychedelic green and purple stripe pattern – retired due to engine failure. Unfortunately, it was unable to cover the full distance on the Sarthe circuit in the following year either. Nevertheless, this 917 model was the first racing car to set a record average speed of over 194 mph at Le Mans.

Number 2 in the ranking is a true Hollywood star: the 917 in Gulf livery. The light blue and orange finish became famous mainly due to its appearance in the Steve McQueen film “Le Mans”: to this day it has remained one of the most valuable models.

Position 1 in the ranking is occupied by the 917 in Salzburg Red. Based on the colors of the Austrian flag, this racing car clinched the very first overall victory for Porsche at the 24 Hours of Le Mans in 1970. 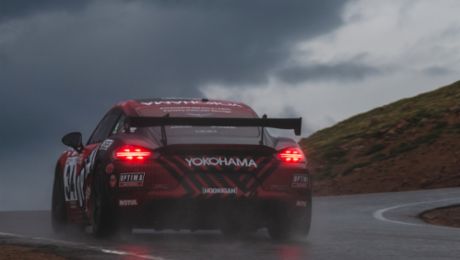