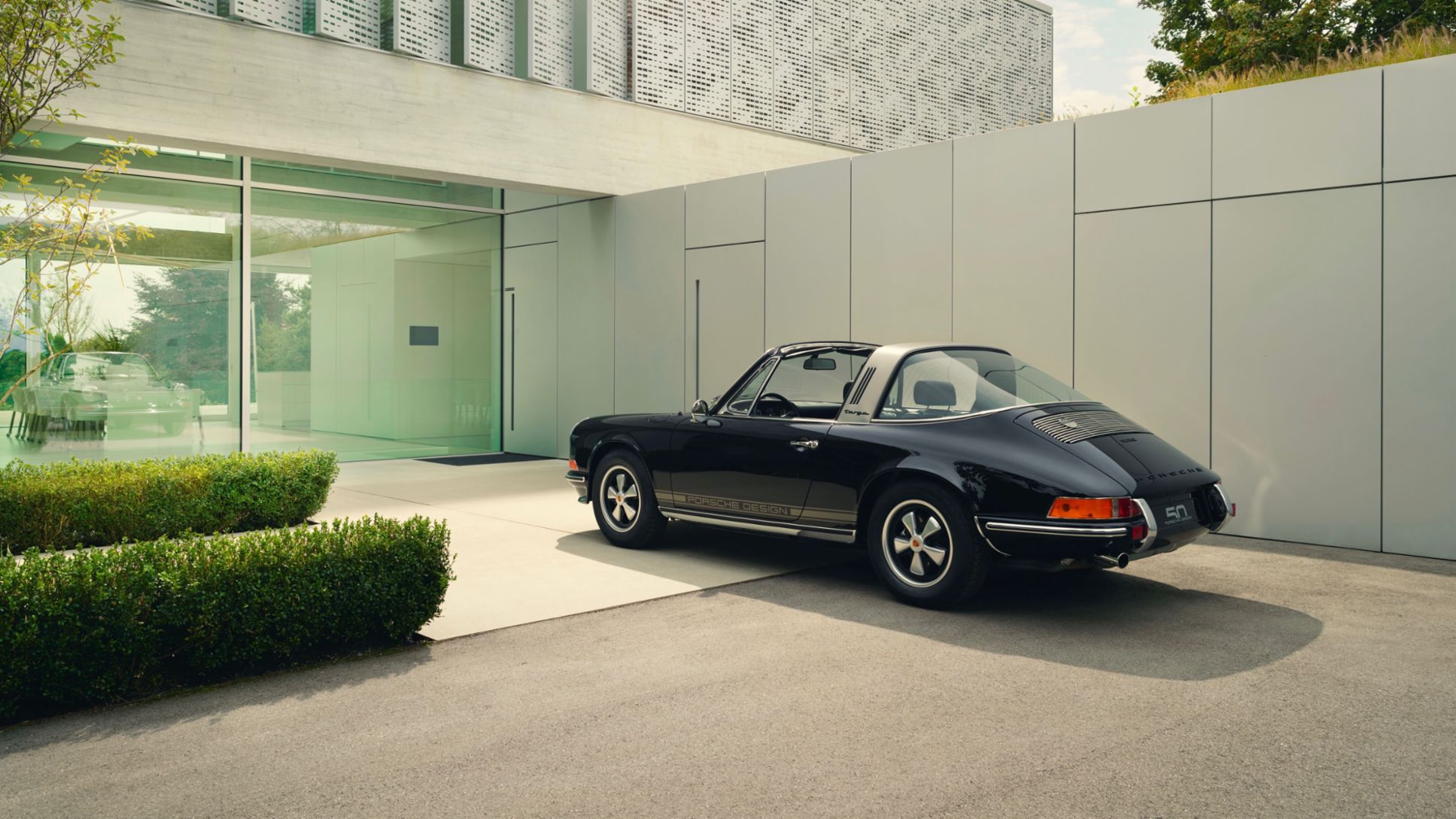 In tribute to Ferdinand Alexander Porsche, the one-of-a-kind vehicle features the same colours as the legendary Chronograph I watch that he designed in 1972: the colour black dominates both the exterior and the interior of the restored vehicle.

"Our vision was to build a historic counterpart for the new 911 Porsche Design 50th Anniversary Edition special model," explains Ulrike Lutz, Director of Porsche Classic. "The new Sonderwunsch programme gave us an opportunity to implement this idea for a unique vehicle pairing. The year of manufacture was the only specific requirement for the donor vehicle on this occasion. The designers and members of the factory restoration team were tasked with carefully transferring the specification from the new car to the classic." The 911 S 2.4 Targa restoration required Porsche Design and Porsche Classic to work closely together. Much of the design input came from Roland Heiler from Studio F.A. Porsche in Zell am See.

"Our general philosophy in a factory restoration project is to restore the vehicles to be as faithful to the original as possible," explains Uwe Makrutzki, Head of Porsche Classic Factory Restoration at Porsche AG. "We deliberately took a different approach with this project. We've created a unique vehicle that blends tradition and present day and bears the signature of Ferdinand Alexander Porsche."

Ferdinand Alexander (1935 – 2012) was the oldest son of Ferry Porsche. He spent two semesters at the Ulm School of Design before leaving to work on body styling at Porsche, the department that created the Porsche 901 towards the end of the 1950s. The vehicle was unveiled in 1963 and became the design icon known as the 911. In 1972, Ferdinand Alexander and his brother Hans-Peter founded the Porsche Design Studio, an independent product design studio. Over the past 50 years, the studio has evolved into the exclusive Porsche Design lifestyle brand and it now showcases the legacy and philosophy of Prof. F.A. Porsche in a variety of product categories.

The restored 911 is painted in solid black and features anodised Fuchs rims. Classic lateral stripes with a Platinum satin finish and integrated Porsche Design lettering decorate the flanks. As a special highlight, the Targa roll bar has the same Platinum satin finish, offering a new interpretation of the brushed stainless steel of the classic model. The Targa lettering is finished in matt black. Like the special edition model, the grille on the engine cover at the rear features a ‘Porsche Design 50th Anniversary’ badge with a reproduction of Ferdinand Alexander's signature.

The interior is also dominated by the colour black, just as the professor would have liked it: back in the 1970s, he contributed to the black colour trend in his role as head of Porsche's first design department. For example, the trim strips on the 911 gradually switched from chrome to matt Black from 1973 onwards. It is thought that this move was prompted by F.A. Porsche at some point before 1972, while he was still the design director. The Chronograph I watch that he designed and presented in the same year was the first watch with a black case and black dial, which was innovative for watch design at the time.

The interior of the unique restoration vehicle features a checked pattern that contrasts with the black leather upholstery and forges a link with the modern special edition model. The checkered Sport Tex fabric features the classic Black and Cool Grey combination and can be found throughout the interior on elements such as the door trims, the central section of the seats and the lower section of the dashboard.

There is a ‘Porsche Design 50th Anniversary’ badge on the passenger side and the same logo also decorates the vehicle document folder and tool bag. Completing the factory restoration project is a presentation box containing detailed vehicle documentation, a key pouch, which is an F.A. Porsche original, and a model of the restored vehicle.

"The production sheet normally tells us exactly what equipment a vehicle had when it was delivered and therefore how it will need to look when restored at a later date," explains Makrutzki. "We had a lot more freedom to play with the configuration on this anniversary model. Porsche Classic provided a lot of advice on this point: not all modifications will fit with the overall philosophy of a vehicle or be technically feasible."

The base vehicle, a 911 T 2.4 Targa from 1972, was in a poor condition and was missing some parts. While this would normally be a tricky start to a restoration project, on this occasion it wasn’t important for the planned modifications. The Porsche Classic experts completely upgraded the engine and chassis to the S version. Back in 1972, the top-of-the-range model had a displacement of 2,341 cm3, which generated 190 PS at 6,500 rpm, and it was equipped with mechanical petrol injection.

The greatest challenge during the restoration project was the vehicle interior. The seat covers are a good example of how modern materials had to conform to historic dimensions. The strength and elasticity of the chosen material made it difficult to finish the 50-year-old seats. "Fortunately, we have an extremely experienced upholsterer in our team who took on the challenge with the help of some templates and test parts," says Makrutzki, who took responsibility for the final road test.

"We do these test drives as a quality assurance measure after every factory restoration. It's always a very emotional moment for me when I drive something this unique: after all, I will have followed the process restoring this vehicle to its former glory for months before we get to this point. The thrill of getting out on the road never wears off."

At the IAA in 1965, Porsche presented the 911 Targa as the first ‘safety cabriolet’ in the world, featuring a roll-bar with a good 20 centimetre width, a removable roof and rear mini soft-top with a plastic window. This was how Porsche responded, in a typically pragmatic way, to debates in the US that cabriolets were dangerous. Shortly afterwards a panoramic rear window with heatable glass followed. The name of the open-top variant – ‘Targa’ – was derived from the Targa Florio endurance race in Sicily that Porsche had already won four times. 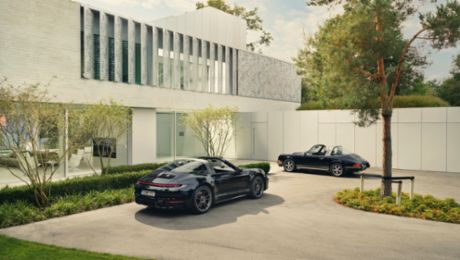 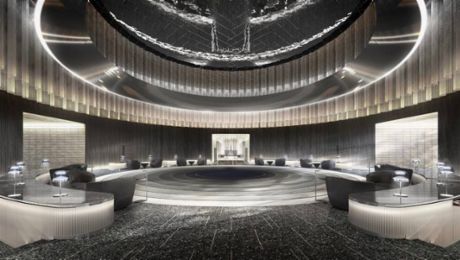 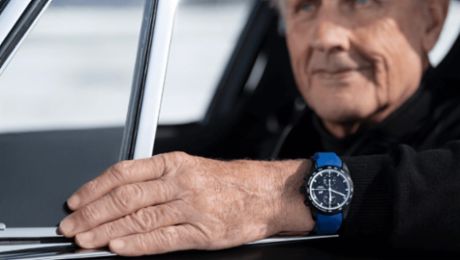