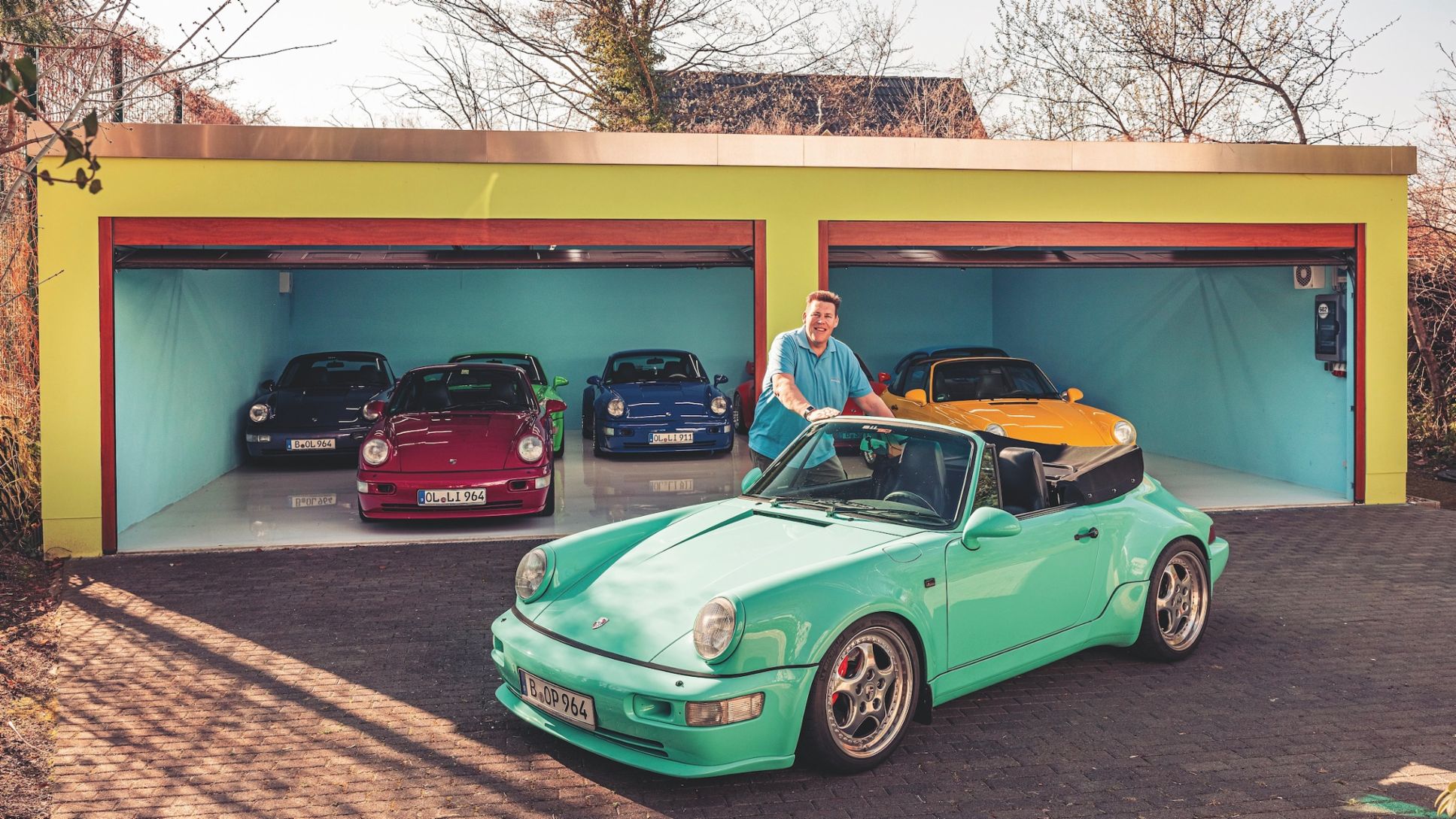 For a lawyer, it's important to have things in black and white. But there's a lot of colour in Hanns-Oliver Plöger's life outside of work – especially in the garage.

Some people search for a long time before they find the place they have always dreamed of. Others build it right behind their house: a garage for car dreams that have come true. Andrea and Hanns-Oliver Plöger’s is filled with eight vehicles – all of them Porsche 911 models from the 964 generation. Visible from their sofa, each one is a source of delight, memories of happy times on the road – and represents a great deal of hard work and luck.

As Plöger opens his garage in Lichtenrade, on the southern outskirts of Berlin, his eight 911s stand proud: Riviera Blue, Ruby Star, Violet Blue Metallic, Mint Green, Yellow Green, Maritime Blue, Blossom Yellow, Continental Orange … and in a few days they will be joined by a ninth example in Coppa Florio. He switches on the barbecue and as the sun begins to go down behind the garage, the former professional volleyball player reveals he has an excursion planned for the following day.

Plöger likes talking – a trait that he admits runs in his family. His father, Hanns-Ekkehard, was a famous lawyer who self-published poems and occasionally made his speeches in court in verse. He kept 50 bantams in his garden. “My father had a large moustache and a penchant for brightly coloured ties,” says Plöger, who took over the law business with his sister Maya-Sylviane after their father died. “I have a pronounced sense of justice,” explains the 51-year-old, who is “always on the side of the weaker party”. He specialises in traffic and criminal law. But he also accepts cases in the areas of civil, inheritance and contract law.

He bought his first 964 in November 1993. The Mint Green 911 was parked in front of a manor house and Plöger remembers “there was a covering of snow on the black convertible top”. “As a Porsche newcomer, I was not familiar with the colours of the 1990s,” he remembers. “The Mint Green shone in the snow-covered surroundings and immediately captured my heart. It was clear to me at this moment that such a candy colour on a 911 is unbeatable.” Later, when looking through the vehicle documents, he discovered that the date on which the 964 was first registered was 29 October – his birthday.

A visit to the Plöger’s home leaves a lasting impression. The house, in which Olli’s brother lived until nine years ago, was built in 1920. The ceilings are more than three and a half metres high. “All the furnishings have to be larger in order to have any effect,” says Andrea Plöger, as she serves black tea from East Frisia, poured onto crystalised sugar, as is fitting for a native of Oldenburg who grew up with this lovely tradition. “A cup of this has saved many a day,” she says with a smile. They got to know each other on holiday in 1986, as teenagers. They still visit the camping site where everything began and a photo from their wedding remains the background picture on her husband’s smartphone.

The pair work together in their law office and share the same passion for colourful 911s. In her handbag, Andrea always carries a DME relay, which controls the petrol pump, ignition and engine control unit. “If we need it one day, we don’t have to be annoyed about not having it with us,” she explains, and strokes tomcat Mucki, who the pair adopted as a stray a few years ago. Whenever Andrea crosses paths with Walter Röhrl at Porsche events, they always talk about cats, she reveals.

The originality of the cars in their garage is not important to her husband, but Speedline wheels are – something which is hard to overlook. “Taste rarely remains unchanged,” he says.

When the third generation of the 911 launched in 1989, Porsche was in a difficult economic situation. The sales figures for the 944 and 928 had fallen significantly and many felt that the time had come for the 964, which consisted of 85 per cent new parts, but largely preserved the traditional forms of the preceding G Model. The 964 brought good fortune to the sports car manufacturer in a difficult period. Decades on, it also brings happiness to the Plögers, filling their memory bank – and their garage.

Text first published in the Porsche Klassik Magazine, No. 20.