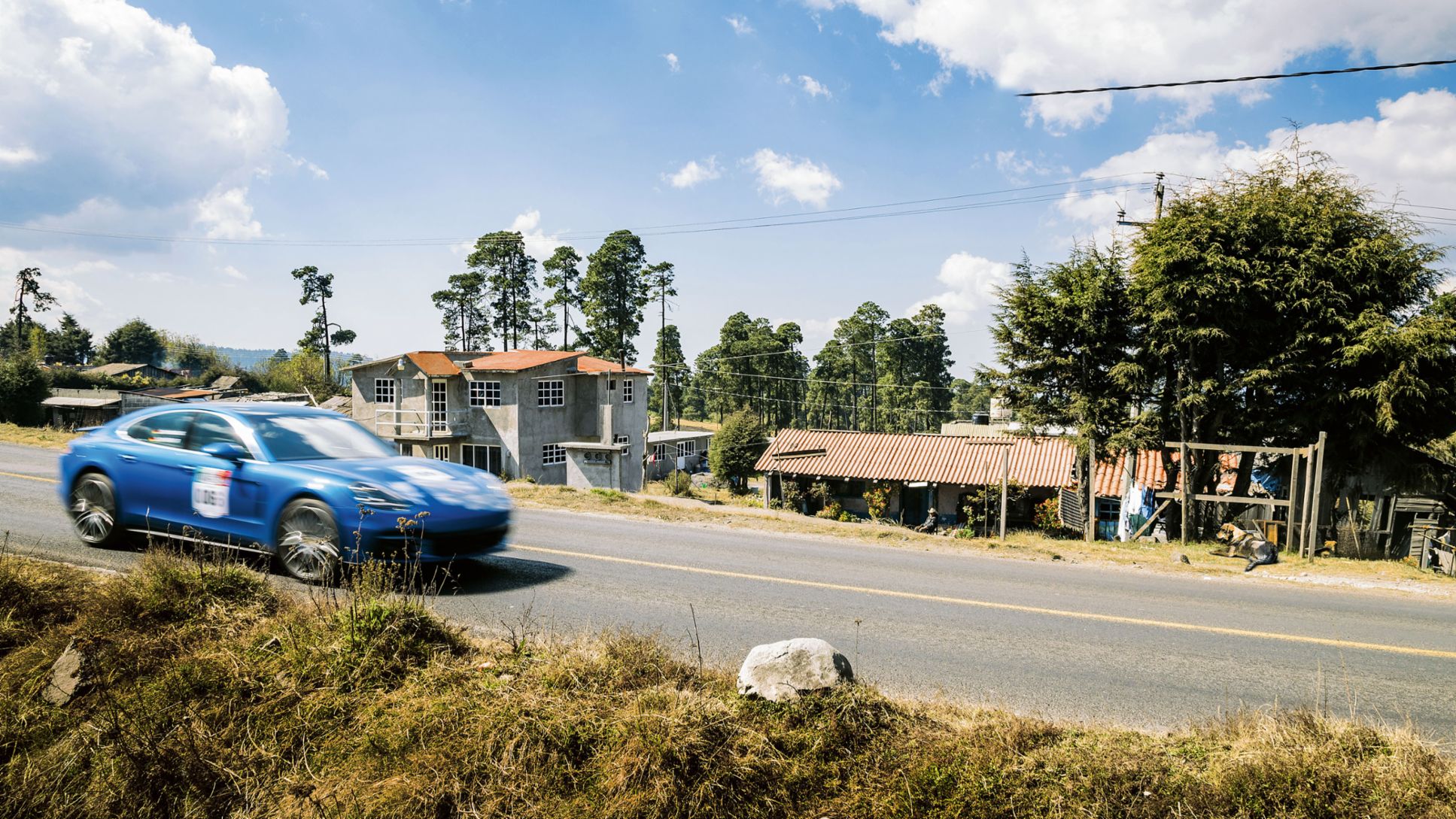 Sometimes the beauty of everyday life only becomes visible when juxtaposed with something completely different. Along the band of asphalt known as the Ruta Panamericana, travelers encounter a nonchalance that unites the perfection of technical precision with the breezy verve of improvisation.

At today’s destination, we’ll be completely surrounded by nature. Thousands—perhaps tens of thousands—of mariposas monarcas will accompany our Porsche Panamera 4S, weightless, enveloping the car like a pulsating cloud of iridescent color. The fluttering dance of the monarch butterflies gaily complements the sports sedan amid the dust of the Pan-American Highway at the end of our drive from Mexico City to the valley of butterflies, some 58 miles away.

Up to a billion monarch butterflies populate the region around the Valle de Bravo between November and March each year. Multiple generations come from Canada and the United States and travel some 2,486 miles along the way to their warm winter quarters in the forested highlands of central Mexico. Monarchs always return to the same trees as the fourth generation before them, without ever having been there; exactly how they do it is unknown. They land in vast clusters and bathe trees and nearby boulders in vibrant orange. The collective flapping of their wings sounds like pattering rain, and when they rise up as one, the sun disappears as if behind a storm cloud.

Since 2010 there has been a drastic drop in the number of overwintering monarchs due to threats such as deforestation, climate change, and extreme weather. One of the many reasons why the Valle de Bravo remains a spectacular location is a sixty-hectare biosphere reserve dedicated to protecting the monarch butterfly. However, while the spectacle of the monarchs captivates us, we still have a rough patch of the Ruta Panamericana before us—a section of the legendary road made famous by the iconic Carrera Panamericana racing series, which gave Porsche two names: Carrera and Panamera.

The Mexico rally, which is closely associated with Porsche, was held between 1950 and 1954 and stretches over 2,113 miles. While the race was restricted to five-seat series sedans in its first year, it was open to sports cars from 1951 on. Porsche posted impressive stage victories from the outset and by 1954 dominated the field. The young brand from Zuffenhausen took six of the top seven places in the small sports cars category, including third place in the overall standings—Porsche’s greatest international success before winning the Targa Florio in Sicily in 1956.

The race was held to mark the completion of the Mexican part of the Pan-American Highway, which links North and South America. The route stretching from Alaska to Tierra del Fuego—the longest dream road in the world—is not a road at all but a network of thousands of kilometers of asphalt. The race across Mexico was not burdened with an excess of rules, so the cars that drove on public roads risked accidents with abandon. The winner was the first car across the finish line, almost regardless of how it got there. The risk was soon too great and, after only five races, the Carrera Panamericana was history—but the idea and its legend lived on. Since 1988 the race has been held as a classic car rally with strict safety regulations.

The fascination with this drive through the heart of the Americas is instantly tangible as soon as one escapes the sprawl of Mexico City and the incredible tranquility and scenic beauty of the landscape settles in. The supreme confidence of the Panamera 4S undoubtedly plays a part in that. The Panamera 4S has a quiet 2.9-liter V6 engine and is impressive with its 440 hp—it makes one want to mute all sound entirely for a moment and enjoy the silence, far from any visible sign of civilization.

The almost eerie quiet of the place is interrupted only by the snorting of two horses. There’s a moment of reflection: well-deserved serenity after several hours of driving. Zelda Ramírez holds two muscular, if somewhat diminutive, horses firmly by the reins as the blue sports sedan rolls to a stop in the parking lot. For the 64-year-old with a cowboy hat, her horses are a kind of insurance. Life out here isn’t always easy. Tourists who ride out into the woods with her ensure that Zelda’s business does well—at least that’s what she says with a smile.

The people native to the highlands of Mexico are close to nature—and they’re well-acquainted with the spectacle of modernity that is the Carrera Panamericana. Twenty-one-year-old Jessica Delgado is no exception. She and her friend Anna-Maria Zaraba run a small business selling meat and sausage products in Raíces, a few kilometers from the Valle de Bravo. Ana María is 73 and could easily be Delgado’s grandmother. Every day they tend the little shop at the side of the road. Sales are modest. “Only during the rally do we have visitors lined up outside,” says Delgado, her eyes alight. Word has spread among the racers and their support vehicles that the two women sell delicious ham. The meat is sold in gossamer slices, and its flavor lingers with us until we reach the swarms of mariposas.

Now the Panamera is charged with proving its mettle amid the thin air and switchbacks of the region. The road progresses its way through the pine forests as the corners grow tighter and the roads worsen. The Porsche quietly takes it all in stride. Some 12 miles past Raíces, the spirit of the Carrera Panamericana comes alive. A special stage on a course that’s been closed just for us. The task is for the driver and codriver, in turn, to drive the 5.9-mile mountain section starting at 3,300 meters above sea level and ending at 3,600 meters above sea level, in as close to the same time as possible. It’s not about speed here; it’s about precision. Spectators soon gather along the roadside to enjoy the feeling of the Carrera Panamericana—thanks to the uniformed authorities who ensure that the equipo Panamera is not disturbed.

One of the armed policemen is Comisario Lucio González Gómez. He’s worked the rallies for years as well. “It’s always a great experience,” says the police officer. “It’s so much fun to see the impressive cars and feel the power of the vehicles and the excitement of the participants.” Notwithstanding the coolness of his reflective shades, the 45-year-old cannot hide his enthusiasm.

We’ve reached the end of our journey. In the valley of the mariposa monarca we gaze up to the skies, entranced. The image reflected in our eyes is amazing beyond belief. It’s a 500-meter section of the road that the fluttering butterflies cross before disappearing once again into the trees of the forest. This place is one of only a few natural wonders listed as a World Heritage site, and UNESCO couldn’t be more right.

The opening of the Mexican part of the Ruta Panamericana, the highway stretching from Alaska to Tierra del Fuego, gave rise to the most famous of all road races in the Americas. In 1950 the field of five-seat sedans—sports cars were first allowed from 1951 onward—set off from north to south. The drivers needed six days for the 2,135-mile route. Due to numerous crashes and fatalities, the race was discontinued after 1954—with Porsche handily winning the small sports car class. The Carrera Panamericana was revived as a classic car rally in 1988. For more information, www.lacarrerapanamericana.com.mx

Photos by Graeme Fordham, My Loupe/Contributor