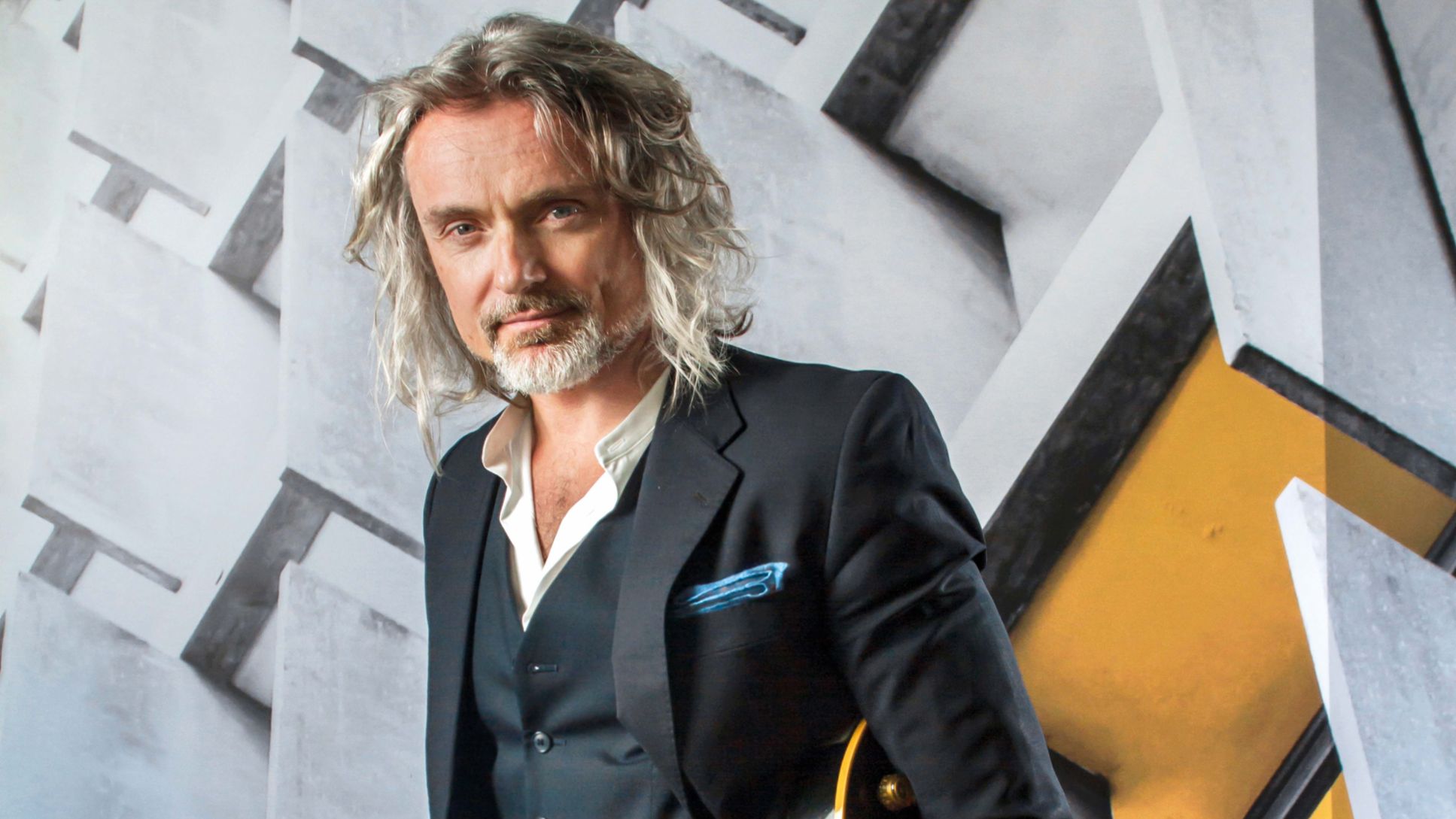 In his younger years Martin Wezowski played bass guitar for a punk rock band. Today, a leading business magazine counts him among “Germany’s one hundred smartest innovators”. As head futurist at the SAP software group, his job is to look ahead.

Thinking, anticipating and managing change is what Martin Wezowski is paid to do. He’s not a man who often dwells on the past. When the pandemic interrupted his intensive travels, however, he made an exception and brought his beloved, albeit dusty, bass guitar up from the basement of his apartment building in Berlin. “A few chords” are still there, he says. Echoes of his first career as a musician.

Now aged 49, Wezowski used to play for the punk rock band Majestic, among others. This was “superb preparation” for the work he does now, because “you just start experimenting, without any predetermined goal”. For Wezowski, who hails from Poland, permanent change is the raucous essence of punk rock. “My current position is also about constantly questioning the status quo, and annoying the managers in our industry.”

“My current position is about constantly questioning the status quo, and annoying the managers in our industry.” Martin Wezowski

As the chief designer and futurist for the strategy team in technology and operations at software giant SAP, he focuses on upcoming trends and considers possible strategies for the software group. His team works directly for the SAP board member in charge of technology and innovation.

Wezowski specialises in positive visions for the future

Wezowski specialises in positive visions for the future. A science fiction fan, he prefers to leave gloomy prophecies to others, such as the “masters of disaster from Hollywood”. They serve up “the worst conceivable scenarios, so perfectly crafted they already seem to be true,” he says. For his part, Wezowski seeks to develop versions of the future “that we desire, and that feature technologies we wish to live with because of the benefits they bring.”

The future is always good for a surprise, he says, one example being the coronavirus crisis. And it will certainly always be marked by change. “All the more so these days, because radical changes no longer take generations to have an impact. We used to be able to outsource the future to our children and grandchildren. That’s no longer possible, because the future is approaching at an ever faster pace.”

“We used to be able to outsource the future to our children and grandchildren. That’s no longer possible, because the future is approaching at an ever faster pace.” Martin Wezowski

This long-haired visionary, who could still pass for a rock star today, is himself something like the personification of change. At the age of 14, Wezowski followed his parents’ daring plan and fled to Sweden to escape repercussions in Communist Poland. For his family, Sweden was the nearest democratically governed country at the time. The fact that he didn’t speak a word of Swedish at first did not deter him from laying ambitious plans. He originally wanted to be an architect, but then decided to study engineering. He soon determined that the field did not provide him with sufficient scope for creativity, and so he began expressing his talents in music. When his band needed a website, t-shirts, and its first CD cover, he gladly took on the challenge. “That was the start of my design work,” he recalls. And soon he switched course again. “When I realised it wasn’t that exciting to design objects, I changed my focus to developing strategies for the future.”

People are the priority for Wezowski

As the senior UX designer at Sony Ericsson, Wezowski was able to combine all the skills he had acquired thus far – from music to design, all kinds of new media technologies, photography, and much more. He was able to adopt the user’s point of view and assess innovations from that perspective. Its key question is how something benefits us as human beings – and precisely this is the single most important question for a professional visionary, whose job is to think in open-minded and unconventional ways. Equipped with this perspective, Wezowski is outlining a conceptual cosmos for creating a more people-oriented work environment for SAP and its clients around the world. “It has enabled us to acquire a new market,” he says.

For Wezowski, it is essential to combine modern technology with the human dimension – to learn about what people experience in their work and how it feels to them. The answers to these questions are more important than a compilation of dry facts. “For nearly 50 years our business model revolved primarily around transactions, operations and functions,” he explains. “That yields an enormous amount of technical data. But where is the experiential data? For me, the magic lies in combining the two.”

“For me, the magic lies in combining technical and experiential data.” Martin Wezowski

Before joining SAP in 2013, Wezowski spent two years in the Chinese city of Shenzhen designing UX strategies for a tech giant that had set out to conquer world markets. He suggested that the firm develop its own systems for its smartphones and electronic appliances. That was a clear plan, although it was not given the requisite positive response. “The company’s priority was on the next quarter’s results rather than a sustainable strategy.”

Wezowski does not think in three-month segments, however. And he is not enamoured of forecasts that simply extrapolate from known data, facts and figures. That approach is “very useful for day-to-day affairs, but completely unsuited for long-range visions,” he says. “The future cannot merely build on what we already know.” Instead, he likes to talk about “imagination’s third horizon,” by which he means we first need to outline an ideal future world and then try to connect this vision with the point of departure we find ourselves at now.

“The future cannot merely build on what we already know.” Martin Wezowski

“The third horizon is based on scenarios that we want for ourselves,” he continues. “Maybe the technology needed for these scenarios is not yet here, but we can imagine that they will be. The market might not be asking for them yet, but we’re sure it will respond positively when we do in fact provide them.” Wezowski’s guiding principle is to break new ground and to actively shape the future. He enjoys unsettling his team members, and also SAP’s customers, with this question: “Why will you still be relevant in ten years?” Anyone who doesn’t have an answer “probably won’t be”.

As SAP’s head futurist, he also sits at the nerve centre when it comes to designing new worlds of work. His great vision is to give the idea of work a new and deeply human definition. “After thousands of years we humans are still basically engaged in hunting and gathering,” he suggests with a smile. “Which is why we spend our time filling out Excel spreadsheets. Most of us could be geniuses like Leonardo da Vinci, Albert Einstein, Marie Curie, or Ada Lovelace, but we haven’t had the time because we’ve been occupied with organising things like logistics, supply chains and production processes.” In other words, work that machines can do better.

The ‘Augmented Me’ is Wezowski's big aim

Wezowski’s great aim is therefore an ‘Augmented Me’, or the prospect of individual augmentation by virtue of intelligent software. He calls this mixture of machine intelligence and human creativity a ‘humachine’. Autopilot in air travel is a precursor. “It helps pilots concentrate on the essentials.”

“What would it be like if there were a machine that got to know me by accompanying me throughout my life?” It could be a helpful assistant for the large and small questions of life, such as advising against that third cup of coffee. It could recognise when our views are derived from biases and indicate that to us. Or recommend making important strategic decisions in the mornings whenever possible because we might be too stressed in the evenings. “That is emotional intelligence,” he notes. 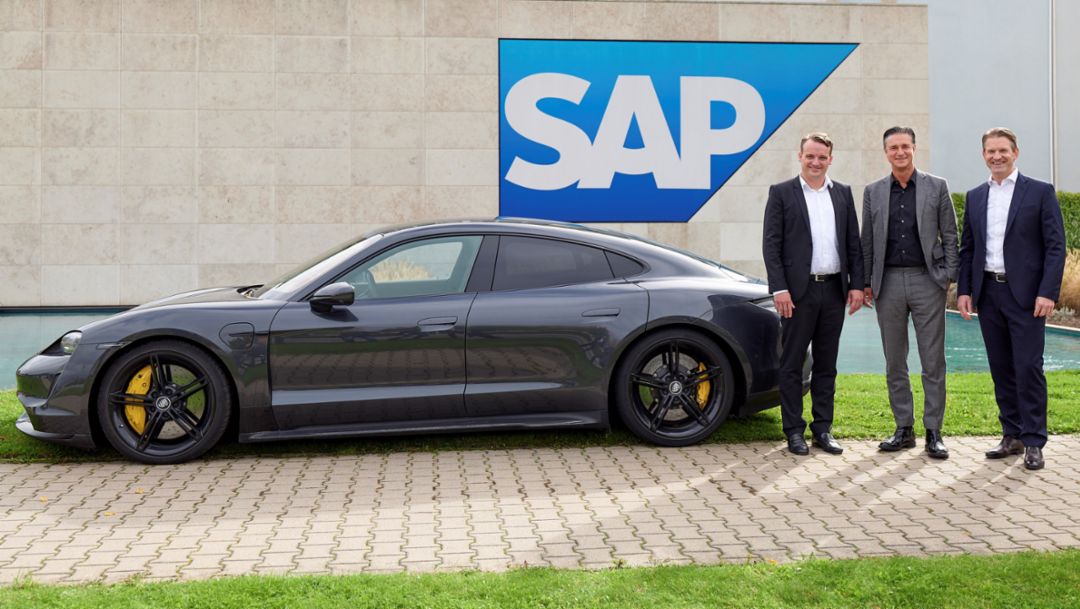 For several decades now, the sports car manufacturer has been successfully using products from the software company based in Walldorf near Stuttgart.

He therefore has high expectations for the strategic partnership that Porsche and SAP entered into in October 2019. Alliances of this type between leading companies are intrinsically important. ”You need partners who show you what you don’t know, or what you haven’t yet thought of,” he says. That gives rise to new realities, ones that unveil “what can sometimes be quite uncomfortable truths, but sometimes also very useful ones.” Porsche and SAP want to benefit from each other’s expertise. They are planning to jointly develop new IT solutions and products that will not only be used by Porsche but also serve as standards for other companies in the automotive industry.

“A Porsche has always been something special for me. Not just a very attractive object, but a work of art.” Martin Wezowski

For Wezowski, Porsche has long been a guiding light. That has to do with his second career as a designer. “A Porsche has always been something special for me. Not just a very attractive object, but a work of art,” he says. “With the Taycan, Porsche has definitely taken a bold step toward electric mobility. It’s exciting to watch where this development will take Porsche and the entire sports-car industry.”

Wezowski just might have a few ideas as to where the journey will lead. But at this juncture the head futurist stops talking, and instead simply enjoys the present – along with an aesthetic appreciation of the first fully electric Porsche.