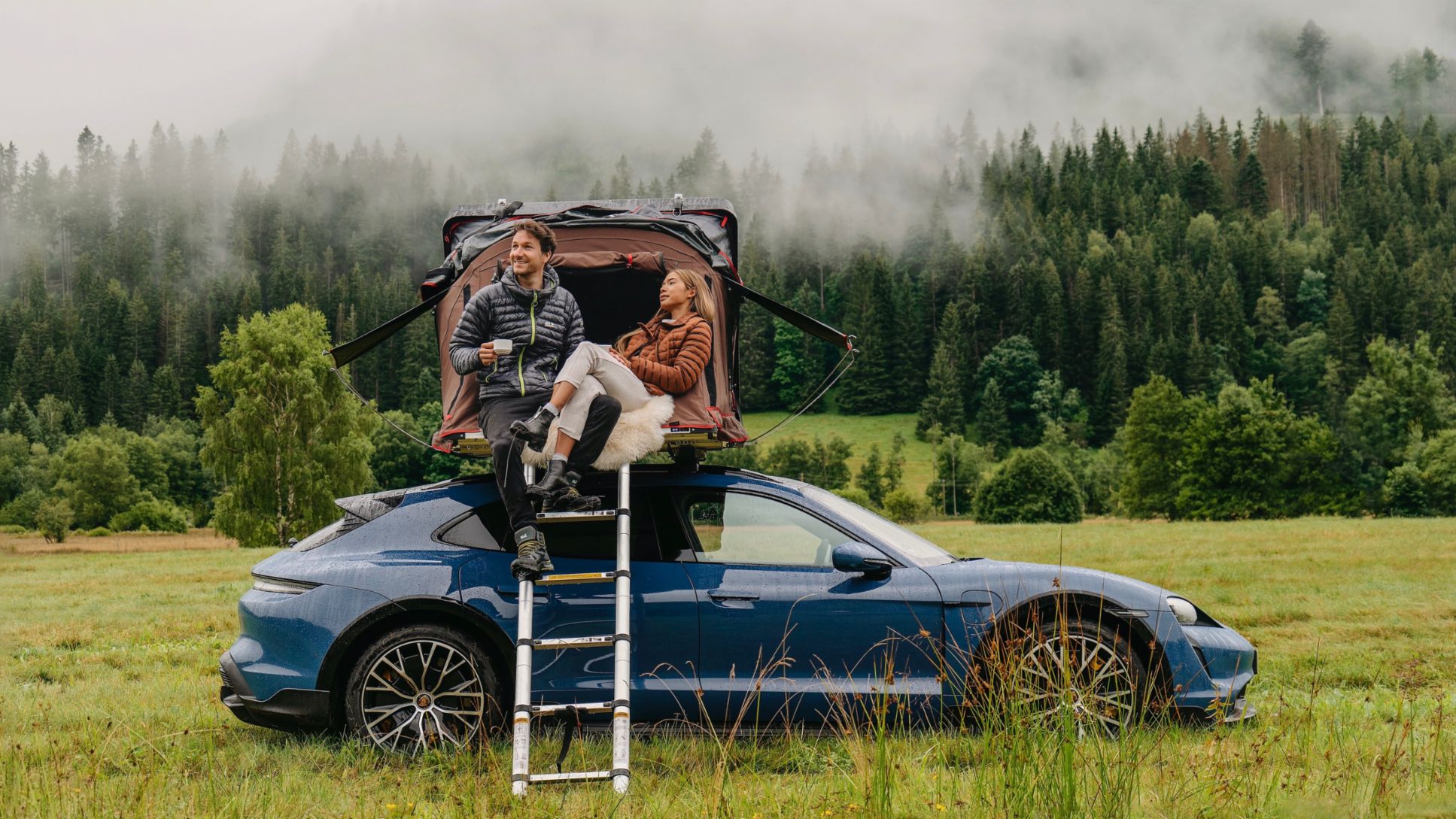 Influencers Frederic Siebold and Marisa Hampe camp out on four wheels as they sample the latest offering from the Porsche Travel Experience.

For Frederic Siebold and Marisa Hampe, travel is a way of life. Having carved out successful careers in travel photography and filmmaking, the dynamic young couple spend much of their lives on the move, exploring far flung places and seeking out new adventures. All of which made them the ideal candidates to sample the latest addition to the Porsche Travel Experience.

Debuting in the Black Forest and Rhine-Hesse regions of southwest Germany, the new Roof Tent Experience brings together a love of adventure with a curiosity and passion for Porsche. The carefully curated road trips encourage guests to explore their surroundings and participate in a selection of exciting new activities while camping out each night, under the stars and on top of a Porsche.

While the Rhine-Hesse tour focuses on that region’s celebrated wine-making industry, the Black Forest tour is oriented around the great outdoors, with a variety of physical challenges planned out across a three-day road trip. For Hampe and Siebold it was a chance to get under the skin of the area, try some new pursuits and, in one case, to fulfil a childhood dream.

“My dad used to buy and repair old Porsches when he was younger, so I’d had this dream of owning one as a kid,” Siebold explains. “I actually saved up through my teens with the goal of buying one. But by the age of 24 I realised that it was a dream that I’d have to come back to later. That money paid for my studies abroad, which is when I got hooked on travelling.”

Siebold grew up in the Kaiserstuhl region near Freiburg and studied digital media in Germany before travelling around Australia in his early 20s. A fascination with meeting new people and discovering different cultures turned mere backpacking into something all-consuming, and he soon abandoned his plans for a Master’s degree in favour of seeing the world.

Hampe, whose parents are both Thai, was also born and raised in Germany and studied art and design in Berlin. Like Siebold, she became hooked on travelling at an early age, eventually documenting her experiences on Instagram to a rapidly growing audience. What began as a hobby quickly became a fulltime occupation, with Hampe’s stunning, artistic images an expression of her emotional responses to new places rather than a simple travel log.

Relationship between humans and nature

“My style focuses on the relationship between humans and nature,” she says. “Nature is simply beautiful, but also unpredictable and sometimes destructive, so every place triggers different feelings in me. My work can be very artistic as I have a background in illustration and painting. That is probably why you won’t find the classic holiday snap on my account, even if I am sometimes categorised as a travel blogger!”

Their journey began at the Porsche Museum in Stuttgart, from where the convoy of cars, now all fitted with roof tents, departed for the Black Forest. “We started to get to know each other straight away over lunch in a great local restaurant, eating really nice food and sharing the stories of how we had all ended up here,” says Siebold. “And for us, those stories are always so interesting.”

The group was soon adding new chapters to those stories, zip-lining high above the forest floor before pitching camp in the remote surroundings of Titisee. Here, they learned how to make Flammkuchen, a traditional Alsatian alternative to pizza, before enjoying the fruits of the labours beside a roaring campfire.

That night, rain arrived, threatening the tour’s schedule but not dampening its participants’ spirits. “The weather wasn’t in our favour,” admits Siebold, “but the tent was dry and we slept really well. And when we woke up, surrounded by pine trees and thick fog, everything looked amazing!” “I actually prefer to spend my time in nature,” adds Hampe, “which is why I decided to move from Berlin to the countryside two years ago. I’m always open to new and exciting adventures. The most important thing for me is to not stand still and to always try to evolve, both personally and artistically!”

Riding ebikes on trails through the forest

The following day, Hampe and Siebold braved the rain to ride ebikes on trails through the forest, while others in the group enjoyed an early morning hike on the Feldberg, the region’s highest mountain, and paddle boarding on nearby Lake Titisee. Inclement weather could do little to hamper the unforgettable experience of driving a selection of the latest Porsche sports cars through some of Germany’s most beautiful and dramatic scenery.

“For me, driving the 911 really was a dream I’d had since childhood,” says Siebold. “This was my first time behind the wheel and it was fantastic to feel the power and performance, but also to just enjoy the process of making that journey in a Porsche. The comfort, the design, the whole look of the car – it’s all really special, and it was an epic landscape to drive through.”

For Siebold and Hampe, inveterate travellers for whom the people they meet are as important as the places they go, another huge part of the Porsche Travel Experience was the community it provided. “You get to know everyone and strengthen your relationships with those people,” Siebold says. “This is something I really liked about the whole experience. Driving a Porsche was a highlight of course, but being among a group of strangers who became friends made it even better. Driving an amazing car while getting to know new people, sharing your experiences and emotions, was perfect. It was a truly a Porsche community.”