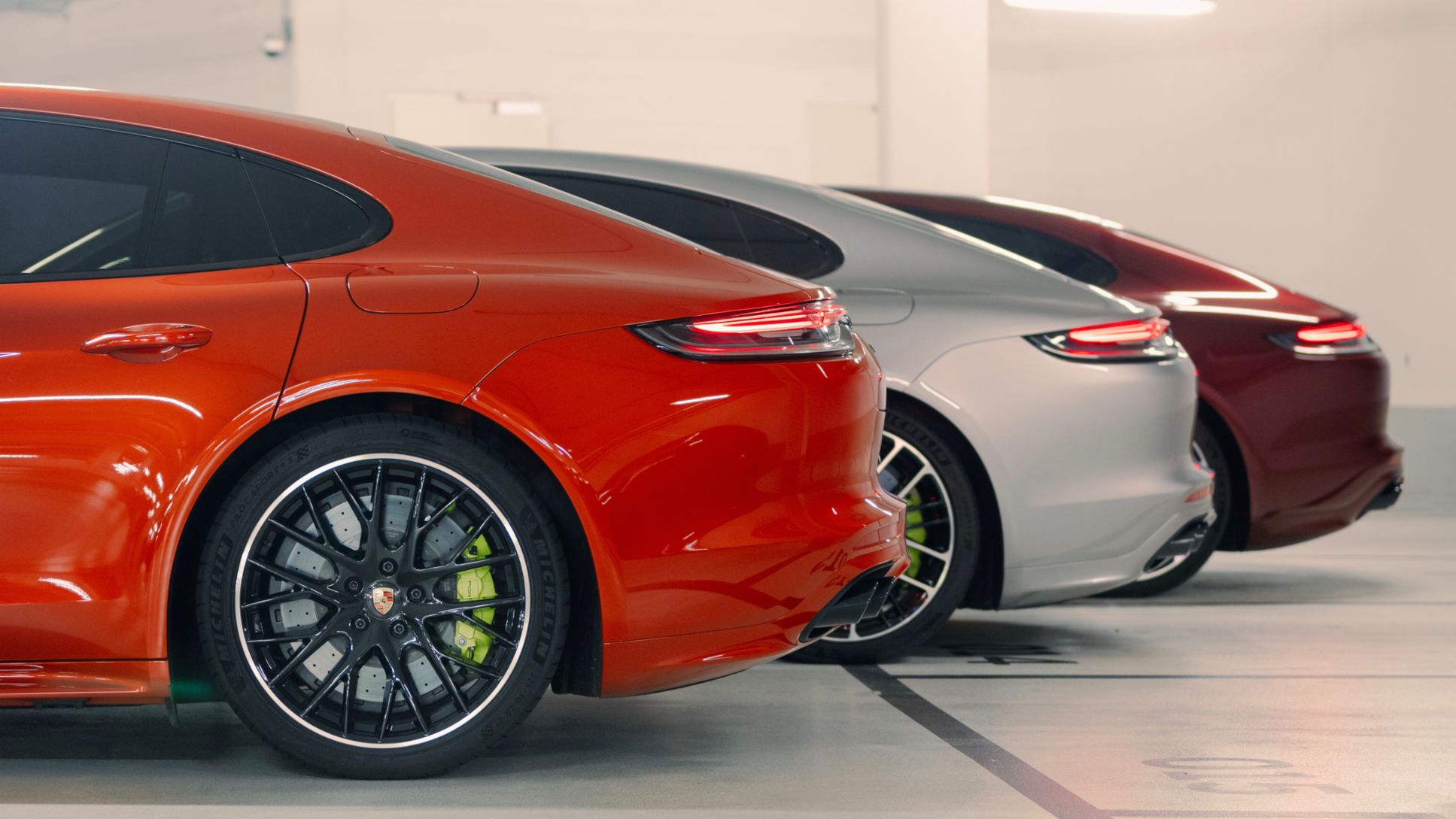 No other manufacturer offers three different hybrid variants in a single model series. But Porsche goes two steps further with the Panamera 4 E-Hybrid, the 4S E-Hybrid, and the Turbo S E-Hybrid: they also come in three body variants. In addition to the standard Panamera, the electrified models are also available as a Sport Turismo or as an Executive version with a longer wheelbase. Guest author Fabian Mechtel took the hybrids out on the road on a test drive to find out more about their individual characters.

Subtle fine-tuning with a big impact

The reworked styling of the new Panamera may seem subtle at first glance, but its effect is nevertheless very noticeable. The Sport Design front end, with its enlarged air intakes and integrated daytime running lights, lends all variants a new sense of dynamism. The now continuous light strip at the rear also adds drama, particularly at night – and especially in combination with the new contours of the tail lights.

The really fascinating part is hidden under the long bonnet

The Porsche Panamera – regardless of body style and engine – is first and foremost a sports car. And the heart of a sports car beats under the bonnet. The hybrid models add a few more exciting ingredients. This is because the key to the E-performance package is the 100-kilowatt electric motor. It sits perfectly and invisibly in the eight-speed PDK dual-clutch transmission, where it delivers its 400 Nm of torque directly to the wheels.

In the redesigned Panamera, the 100 kW (136 PS; Modèles Panamera E-Hybrid: consommation de carburant en cycle mixte (WLTP) 3,0 – 2,0 l/100 km, émissions de CO₂ en cycle mixte (WLTP) 69 – 45 g/km, consommation électrique en cycle mixte (WLTP) 24,9 – 22,6 kWh/100 km, Autonomie électrique combinée (WLTP) 45 – 56 km, Autonomie électrique en zone urbaine (WLTP) 48 – 56 km) electric motor, which is the same in all three hybrid models, is supplied by a battery with a bigger capacity. Thanks to an update to a more modern cell chemistry, the storable energy content has been significantly increased while retaining the same battery size. The battery pack under the boot floor now has 17.9 kWh instead of the previous 14.1 kWh. This is enough for up to 64 kilometres of purely electric driving.

The long effective range of the hybrid Panamera is also the result of meticulous fine-tuning of the operating strategy. The large number of variables involved in the complex calculations is almost impenetrable for a layman. With the four driving modes, however, you can simply select your preference on the steering wheel and the E-Hybrid drive does the rest all by itself.

Every Panamera E-Hybrid starts its journey silently in E-Power mode, with the combination of electric motor and biturbo engine intervening fully automatically – for example under acceleration or when the battery's minimum charge level has not been reached. In driving mode, the driver receives haptic feedback via the accelerator pedal, which they can use to control the transition from pure electric to hybrid operation: if the accelerator pedal is pressed more than halfway, a period of free travel begins, signalling that maximum electric assistance has been reached and that the combustion engine will soon kick in.

What sounds somewhat complicated is actually simple and, above all, intuitive in everyday use. The use of the motors can be very accurately measured thanks to the intelligent control system, and the Panamera can easily be driven in pure electric mode without prompting the biturbo internal combustion engine to kick in. Everyday driving in pure electric mode is therefore no problem.

Those who drive longer distances will get the highest efficiency out of the E-Hybrid powertrain in Hybrid Auto mode. Not only are the driving profile, charging level, topography and speed included in the calculation for the optimum operating strategy, but so is the navigation data if a destination has been programmed into the car’s navigation system. This means that the most efficient use of both powertrains is always calculated on the basis of a real-time route. On a stretch of motorway, for example, the battery is given more charge if this is predicted to be followed directly by driving though an urban area – where it makes sense to use the electric motor. It is this foresight on the part of the car that is remarkable, because the route calculation always keeps the right amount of energy in the battery, ready to complete the journey quietly and emissions-free in urban and residential areas.

E-Hold and E-Charge: the individual strategy with even greater intelligence

Cars aren’t always driven with navigation activated: on the daily commute, for example, or on other everyday routes. This is where the Panamera E-Hybrid offers a clever feature in the form of the E-Hold function, which keeps the power supply at the current charge level and instead forces the use of the car’s combustion engine. This means that it can be accessed again at a later time at the push of a button – for example when boosting or driving the final part of the route purely on electric power.

The E-Performance models can even charge the high-voltage battery while driving. With the E-Charge function, all electrified Panamera models shift the load point of the engine: in this mode, the biturbo combustion engine therefore generates more energy than is needed purely for propulsion and stores the excess in the battery. To ensure maximum efficiency in this mode as well, the battery charging strategy has been significantly revised compared with its predecessor. In the new Panamera E-Hybrid models, the battery is only charged up to 80 per cent in E-Charge mode. Above this limit, not only does charging become more inefficient, but less storage is also left over for recuperation. So, if a lot of energy were to be converted by descending hills and with heavy braking, there would not be sufficient storage space and this excess energy would go unused. With the new charging strategy, valuable efficiency points are also gained here. Incidentally, the charging power of 7.2 kW in E-Charge mode is exactly the same as that of the optional onboard charger.

Sport and Sport Plus: when the name says it all

In Sport mode, the focus is on performance. Both motors work in tandem to ensure the best driving dynamics. At the same time, the battery’s energy management system is designed to ensure that there is always a supply of stored battery power available for boosting. Sport Plus mode goes one step further. Here, the focus is on delivering the ultimate in driving dynamics, which is why every system’s map is fine-tuned even further. For example, recharging the battery in partial load phases of the combustion engine with 12 kW not only ensures the highest charging power of all operating modes, but also that the target charge level of 80 per cent is reached particularly quickly – so that the electric motor can support with maximum power in every situation. In Sport Plus mode, the Panamera E-Hybrid charges even faster than via the integrated onboard charger.

It cannot be reduced to its bare performance figures; it's more about that very special feeling of lightness. It doesn't have to exert itself; it simply shakes the irrepressible power loose from its sleeve. You don't have to force it – you don't even want to – you just let it go. On a loose rein and, if necessary, always with an energetic intermediate sprint. The longer the distance, the better.

Like the 4 E-Hybrid, the 4S E-Hybrid relies on the combination of V6 biturbo and 100 kW electric motor (Panamera 4S E-Hybrid: consommation de carburant en cycle mixte (WLTP) 2,8 – 2,2 l/100 km, émissions de CO₂ en cycle mixte (WLTP) 64 – 51 g/km, consommation électrique en cycle mixte (WLTP) 24,5 – 22,6 kWh/100 km, Autonomie électrique combinée (WLTP) 46 – 53 km, Autonomie électrique en zone urbaine (WLTP) 49 – 54 km), but the 2.9-litre engine performs more freely in the S. Instead of (243 kW) 330 PS, the V6 engine produces (324 kW) 440 PS and thus 412 kW (560 PS) as a total system output. What would already be enough to trump its little brother in the quartet is also expressed in a completely different character on the road. At first, there doesn't seem to be much difference, but in the upper third of the rev range, the Panamera 4S E-Hybrid delivers so much power that it makes your eyes pop. The sprint from a standstill to 100 km/h is achieved in 3.7 seconds: no drama, no protests, just quite casually and simply at full throttle. Over and over again.

The first blip of the throttle is also the moment when you understand that you are really dealing with a car that is exceptional to drive. The harmony of both combustion engine and electric motor is impressive, and you can tell that Porsche has years of experience in building hybrids, because it seems like a single, unified whole. Of course, an expert would immediately recognise the initial punch – that this explosion of power out of nowhere can only come from an electric motor – but the V6 biturbo takes over so smoothly, so discreetly, and with such a subtle increase that you stay on the accelerator pedal almost purely to find out what happens next. And the further the rev needle flicks upward, the more mercilessly the 4S E-Hybrid pushes.

Soon after starting up the Turbo S E-Hybrid, it's clear that the electrified 4S has met its match. You have to outsmart the top model in the range, however, because if you haven't clicked it into the Sport position before twisting the keyless start system control, your eardrums will be disappointed – in E-Power mode, the V8 (Panamera Turbo S E-Hybrid: consommation de carburant en cycle mixte (WLTP) 2,9 – 2,7 l/100 km, émissions de CO₂ en cycle mixte (WLTP) 66 – 61 g/km, consommation électrique en cycle mixte (WLTP) 24,6 – 24,0 kWh/100 km, Autonomie électrique combinée (WLTP) 48 – 50 km, Autonomie électrique en zone urbaine (WLTP) 49 – 50 km) simply stays quiet. In S position, however, the four-litre engine comes to life with real vigour. And despite all the wonderful silence that hybridisation brings to the Panamera cosmos, it is still the sound that accounts for a large part of the emotion.

And the Turbo S E-Hybrid can make every kind of noise. From a silent whisper to a muscular growl to a hard tremolo at the 6,000 rpm mark when you demand everything from it. The noises made by your passengers are also interesting. At full throttle, they experience gears one to five while firmly fixed to the headrest. The flagship model allows you to teach the laws of physics with live experiments, because the relation of acceleration and mass inertia can be demonstrated at will. It is an inspiring sum of many talents. But you also have to include the two other E-Hybrid Panamera models at this point. Because the range of features is remarkable in all three.

More than a compromise: the Panamera E-Hybrid models

The very nature of its pedigree makes it clear that a Panamera has mastered the sports genre from the inside out. Added to this, however, are comfort and long-distance capabilities that are second to none in a luxury saloon. The electric power punch of the E-Performance drive now adds another dimension to its range of talents. Whether purely electric for everyday driving, with maximum efficiency for long distances or with maximum performance in situations where driving pleasure is the priority – it is the best of these worlds combined. No competitor comes close to the Panamera E-Hybrid with regard to this range of performance. For this reason alone, they are more than just tempting. Porsche has really hit the bullseye here. Three bullseyes, to be precise. 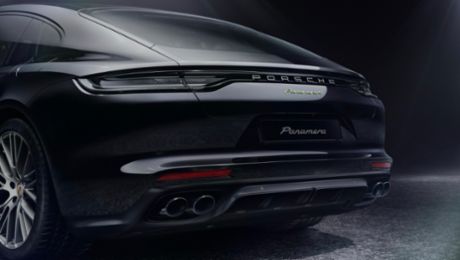 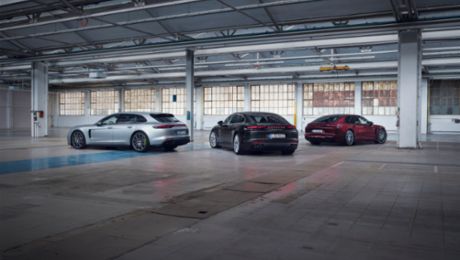