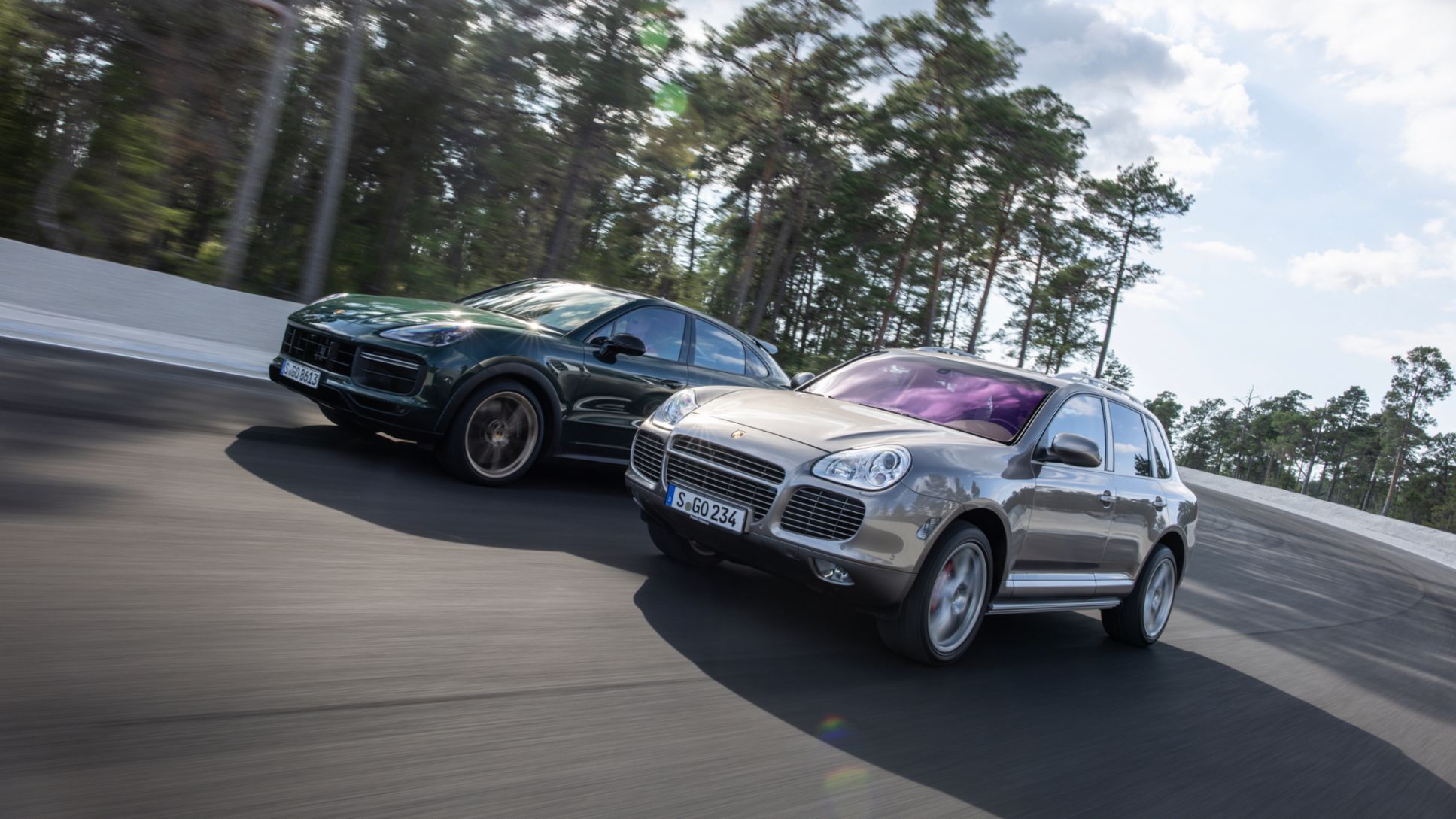 With entrepreneurial foresight, typical Porsche attention to detail and the highest quality standards, the sports car manufacturer embarked on the project, code-named ‘Colorado’, at the tail end of the 1990s. In order to meet the brand’s exacting performance standards in the SUV segment as well, engineers developed a new V8 engine for the Cayenne that would deliver maximum power and torque figures: in the Cayenne S, the 4.5-litre engine produced 250 kW (340 PS) and 420 Nm. With the same displacement, the Cayenne Turbo served up an even more impressive 331 kW (450 PS) and 620 Nm. The result was sports-car-level performance characteristics such as top speeds of 242 and 266 km/h, respectively. Special features of the four-valve engine included VarioCam technology, which allowed 25 degrees of camshaft adjustment, and the integrated dry-sump lubrication, which ensured adequate lubrication of all engine components even under conditions of high and extended lateral acceleration.

Outwardly, the new flagship model had a reserved appearance – only the lettering betrayed its enormous performance potential. The V8 delivered a majestic 383 kW (521 hp) in the Turbo S, and, at 720 Nm, its peak torque was some 100 Nm more than that of the Turbo. In terms of driving dynamics, the Cayenne Turbo S set new standards for the segment. The 2,355-kg SUV hit 100 km/h in just 5.2 seconds, almost half a second faster than the Turbo, on its way to a maximum speed of 270 km/h.

The increase in power and torque came about primarily through a revision of the two charge air coolers. They now cooled the compressed air even more effectively, not least because the heat exchangers were now made entirely of aluminium and were 13 millimetres bigger. This enabled a 0.2- to 1.9-bar jump in boost pressure, depending on engine speed, which boosted the engine’s power output in turn.

Exclusively on the Cayenne Turbo S, Porsche installed the biggest brake system that it had put in a series production vehicle to date. The diameter of the front brake discs increased to 380 mm, and 358 mm at the rear, compared to 350 and 330 on the Turbo. The brake callipers also grew, which required the use of at least 19-inch wheels, a rim size that was intended for use with winter tyres. The Cayenne Turbo S was equipped with 20-inch wheels as standard. The lightweight wheels carried 275/40-size tyres that were specially designed for the Cayenne and were approved for speeds of up to 300 km/h.

From 2002 to 2007, Porsche launched four variants of the first-generation Cayenne. In addition to the Cayenne S, Cayenne Turbo and Cayenne Turbo S, there was also a base Cayenne, which did not carry an additional designation. This model served as an entry point to the model line and was equipped with a V6 from co-operation partner Volkswagen. The 3.2-litre petrol engine generated 184 kW (250 PS) and produced peak torque of 310 Nm. For the product update – the ‘facelift’ – in 2007, the established engines got power boosts, with the Cayenne Turbo S leading the way with 404 kW (550 PS). New engines were also added with the Cayenne GTS (298 kW/405 PS) and Cayenne Diesel (176 kW/240 PS). With the fully functional Cayenne Hybrid study, Porsche also ventured a glimpse into a partially electrified future.

Between 2002 and 2010, the first-generation Porsche Cayenne presented a total of six engine variants and eight equipment lines. A total of 276,652 vehicles rolled out of the factory, with the Cayenne S the biggest seller with a share of 38.9 per cent. The Turbo S, with only 5,455 deliveries, remained the exclusive super sports flagship. Another member of the Cayenne family continues to set the segment standard in terms of exceptional sports-car performance today. With the 471 kW (640 PS; Cayenne Turbo GT: consommation de carburant en cycle mixte (WLTP) 14,1 l/100 km, émissions de CO₂ en cycle mixte (WLTP) 319 g/km) Cayenne Turbo GT, Porsche launched a ‘Supersport Utility Vehicle’ in 2021 that was tailored to maximum handling and performance. With its outstanding driving characteristics, this vehicle raises the bar just as the first Cayenne Turbo S did in its day.