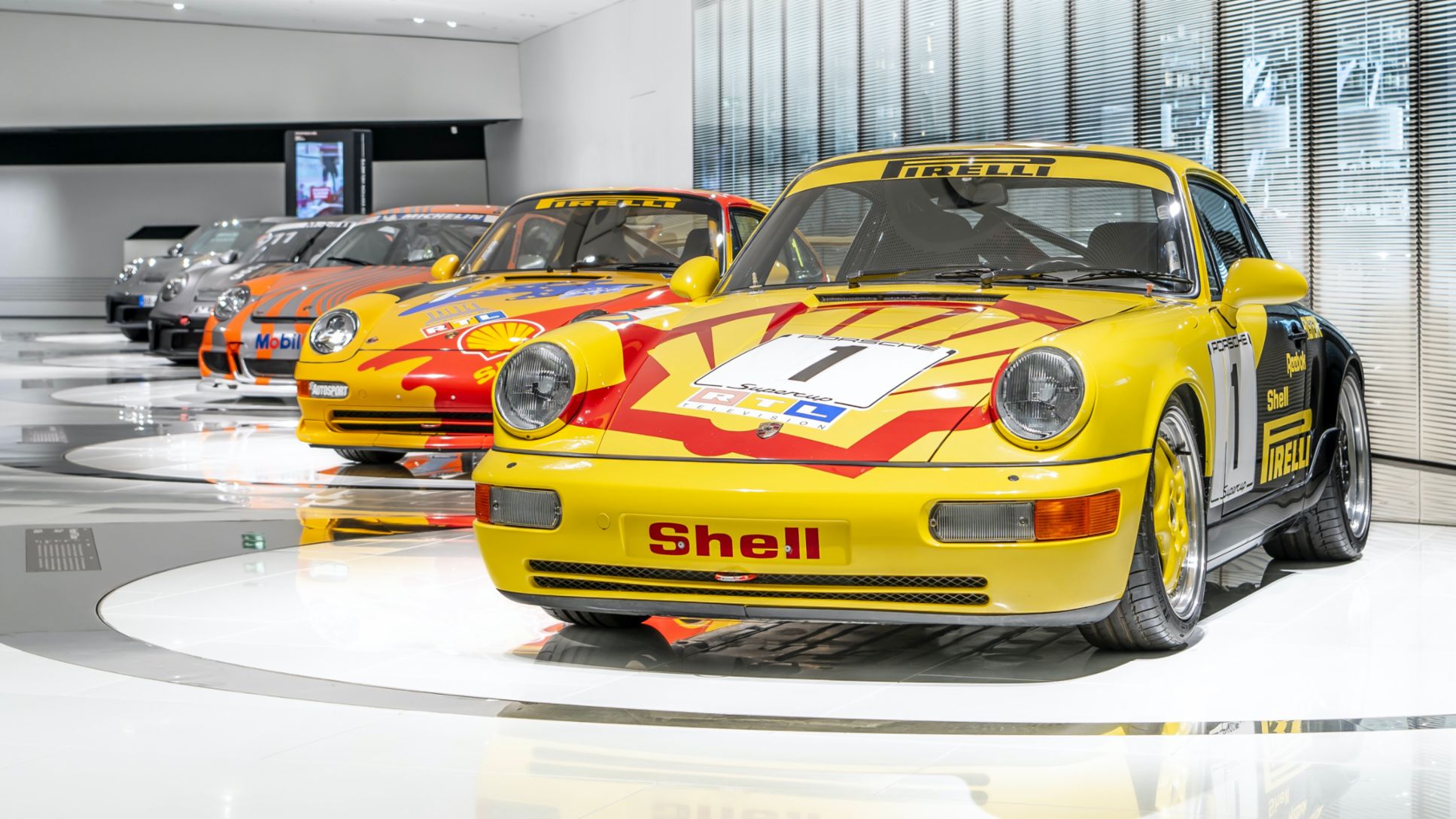 To mark "30 years of the Porsche Supercup", the Porsche Museum is presenting the special-edition model of a 911 GT3 in anniversary design as well as four other Cup racing cars until 28 August 2022.

On display alongside the anniversary model is the 911 GT3 Cup in VIP Car design, the flagship of the Supercup series. It will be driven by famous personalities in selected races of the 2022 season. Also on display is the 911 GT3 Cup 3.8 from 1994, which is based on the 911 generation Type 993. Visitors to the museum will also encounter the third-generation Porsche 911 Carrera 2 Cup, which started in its first year and is based on the 911 Carrera RS. The 911 GT3 Cup Type 997, which is the first Cup vehicle to be delivered by Porsche without ABS, completes the field.

Thomas Laudenbach, Vice President Porsche Motorsport: “Thirty years of the Porsche Supercup – that’s an extraordinary time span for the international flagship of our one-make cups. Such success is only possible thanks to the professionalism of everyone involved, from the drivers and the teams to the organisers.”

Special-edition model of a 911 GT3 Cup in anniversary design

The specialists at Porsche Exclusive Manufaktur have fulfilled a special wish for the Porsche Motorsport project managers: A roadgoing 911 GT3 based on the 911 GT3 Cup in the 30th anniversary livery. The Porsche Supercup has been one of the best-known and toughest customer racing series in the world for 30 years. To drive the new 911 GT3 Cup on legendary circuits such as Monte Carlo or Silverstone in the run-up to Formula One races is a dream-come-true for many racers. The organisers of this one-make series have decided to mark this special anniversary with a treat for themselves. The 911 GT3 – 30 Years of Porsche Supercup is a worthy ambassador in the anniversary year and is now on display in the Porsche Museum.

A design adaptation of the VIP Car 2022 serves as the basis for the special production of a Porsche 911 GT3. The unique vehicle represents the connection between Porsche as a manufacturer of exclusive vehicles and the commitment to motorsport within the framework of the Porsche Supercup for 30 years. The design elements of the VIP Car, such as the 30th anniversary icon, the names of the previous Porsche Supercup champions, the pixel grid as well as the colour scheme make this vehicle a roadworthy counterpart of the racing car.

The Porsche Mobil 1 Supercup is regarded as one of the toughest one-make series in the world. Races are held at the European events of the FIA Formula One World Championship. A total of 28 racing drivers from eight teams are competing for the title in this anniversary season. In addition to the overall and ProAm driver classification, there is also a team and a rookie classification. Since the 2021 season, the Porsche 911 GT3 Cup racing car has been based on the current 992 generation 911. With an output of around 375 kW (510 PS), the spectacularly designed Cup car outmuscles its direct predecessor by 25 PS. The 911 GT3 Cup will be fuelled with Esso Renewable Racing Fuel.