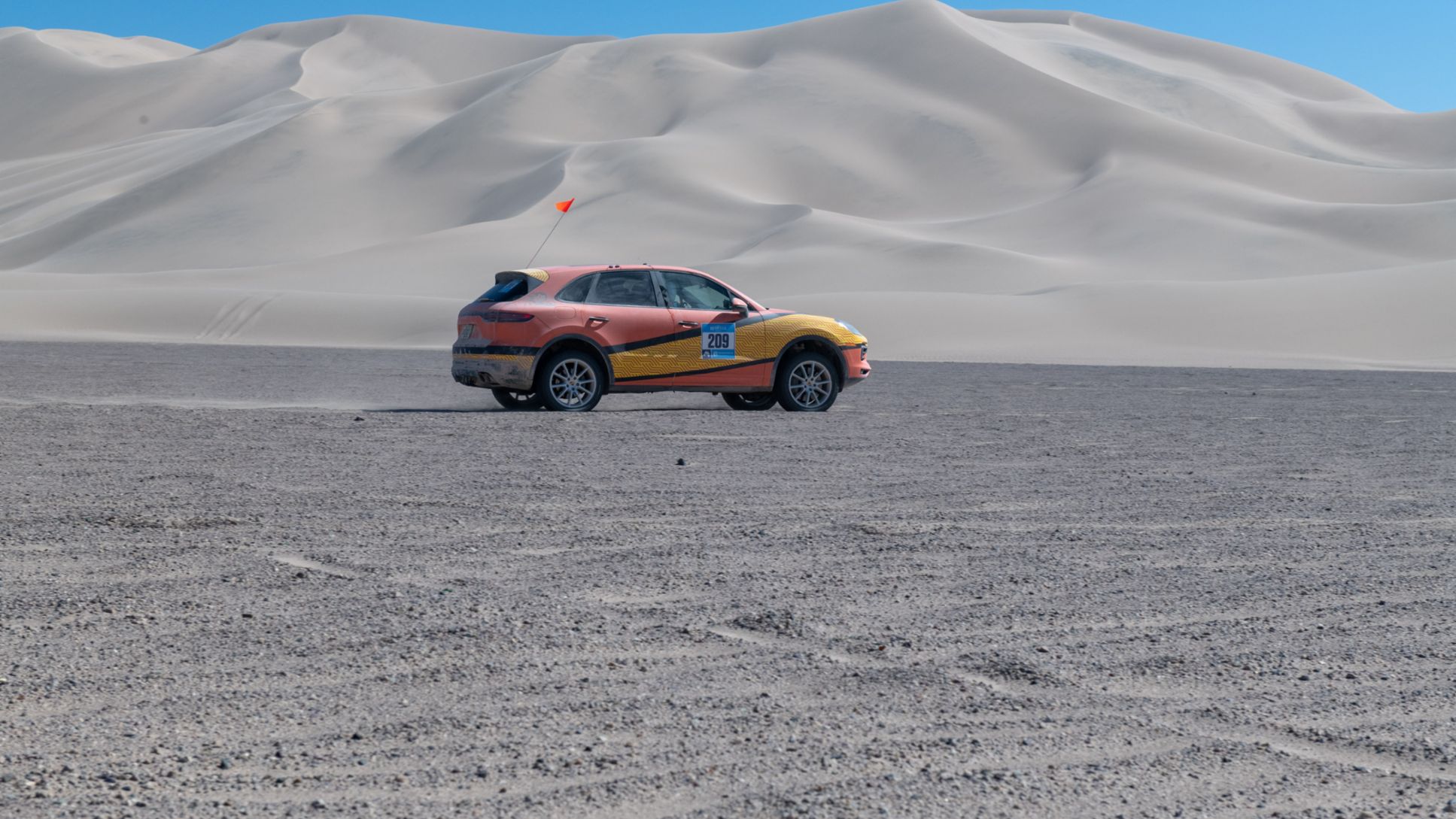 First time off-road racers Abby Bassett and Beth Bowman take on the Rebelle Rally, a navigational and endurance challenge through the California and Nevada desert, in a stock Cayenne S.

After a week in the desert for the 2021 Rebelle Rally, the no. 209 Porsche Cayenne S piloted by Abby Bassett and Beth Bowman emerged from the dust and debris with a fresh grime filter over the Transsyberia-inspired orange and yellow wrap.

The driver and navigator team came out of the experience with an exhilarating new chapter in their long friendship and a larger appreciation for Porsche engineering.

1,500 miles through the desert in a stock Cayenne

"We're just returning to the grid after 10 days of total contact blackout and exceedingly challenging offroad driving in our bone stock Cayenne S," said Bassett, the driving half of The Wanderettes. "Together, Beth and I pushed more than 1,500 miles through cold, heat, snow, rain and sleet, survived a massive sandstorm and scorpions, and earned nearly 1,000 points in our first rally. "What a wild and amazing thing.⁠"

The team's Cayenne S was still on a street set-up - 20-inch wheels and "impressive" General Grabber A/Tx tires - yet tackled every obstacle with aplomb. Ruby, the name given to the SUV by The Wanderettes, took the torture in stride without suffering any damage or puncturing a tire. "Our third teammate, Ruby, was simply jaw-dropping. There's no other vehicle I'd have chosen," said Bassett, noting she's already missing the Porsche-provided rig.

"From Big Dune to Dumont to Glamis, we were never once stranded in a dune, and we even pulled a team out of a tricky spot in Glamis. Every single morning Ruby purred to life, kept us warm and safe, and did the work without a single complaint or hiccup. Over gnarly rock crawls and super soft washes, the Cayenne performed again and again, that melodious twin-turbo ringing off the canyon walls."

The X-Cross Class competitors navigated their way through checkpoints and endurance stages, relying on each other for support in the tough times, and connecting with other teams at the all-women event to swap tips and stories from the route.

"To say that the Rebelle Rally changes you is an understatement. To say it teaches you how to conquer things that you never thought you could is to shortchange the entire experience," said Bowman. "In one word, my time competing in the rally has been downright epic."

Ruby and The Wanderettes finished seventh in their class at Bassett and Bowman's first foray into off-road rally racing. The training sessions the team put in beforehand helped the Cayenne improve its points total each day and finish the rally unscathed, and for Bowman and Bassett, they are taking away much more from the southwest than bragging rights.

"For now, I'm grateful, exhausted and still a bit dusty and dirty," said Bassett. "I'm shot and still recovering from one of the most challenging things I've done in the last two years, both mentally and physcially. "I can also say I am now officially a Rebelle."

Scenes from the Rebelle Rally

You expect to see a Porsche at a track day. You may not expect to see one making tracks through the sand. The proving grounds aren’t always paved with asphalt, and the driving duo of Abby Bassett and Beth Bowman are prepared to learn what exactly a stock Porsche Cayenne S is capable of over eight days in the desert during the 2021 Rebelle Rally. 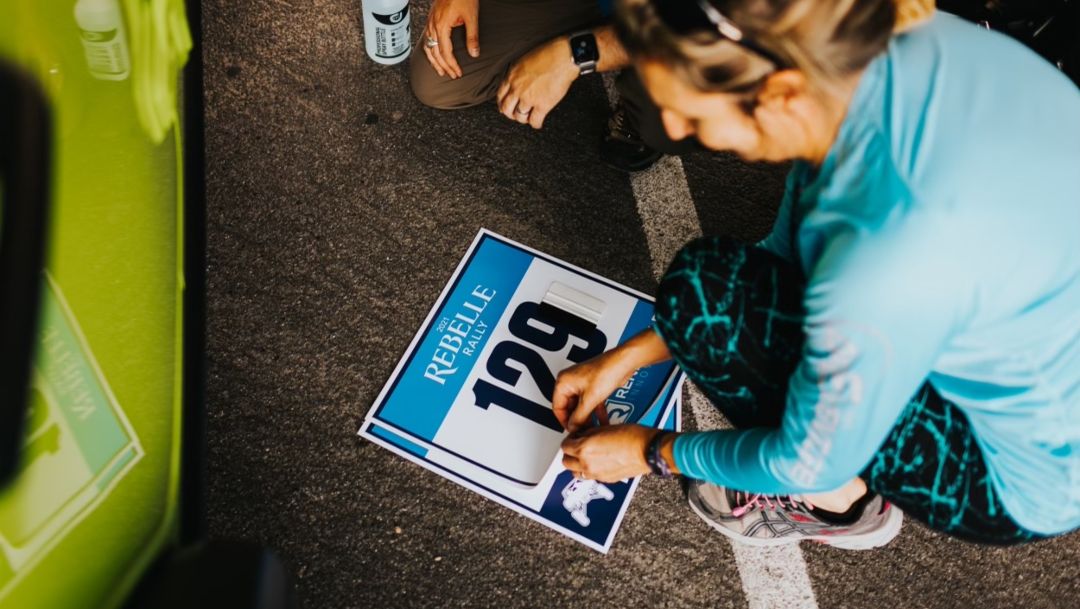 The Rebelle Rally is the first ever women’s off-road rally raid in the United States, and blends the love of driving with the ultimate challenge of precise navigation all while covering 2,500 kilometers of stunning terrain across Nevada and California. This year marks the first time Porsche Cars North America, Inc. (PCNA) has sponsored a vehicle in the rally.

“We thrive on competition – it’s ingrained into who we are – and by pushing ourselves and our cars we learn fast,” said Shelby Akin, Product Communications Specialist for the Cayenne. “More importantly, events like Rebelle Rally serve to inspire and to ignite interest and curiosity in a new generation of drivers. We’re proud to support Abby and Beth with the Cayenne – a phenomenally strong and capable car – and we know they’ll give it their all and will have an amazing experience along the way.”

Neither Bassett nor Bowman have ever completed in a rally, but their vehicle will be ready. The Porsche Cayenne debuted in 2003, and in 2006 a first generation Cayenne S, powered by a 4.5-liter V8 engine, won the Transsyberia Rally across Russia for the first time. The 2020 Cayenne S Bassett and Bowman will be piloting produces 434 hp from a twin-turbocharged V6, 94 more hp from the factory than it did in 2007, and 405 lb-ft of torque compared to 310 lb-ft in the past. The only true modifications made to the Rebelle Rally Cayenne S are larger, terrain-specific tires for the loose sand and dirt, as well as added safety and recovery equipment for the time spent overlanding. For 2021, Bassett and Bowman will be competing in the X-CROSS™ Class with other street legal two-wheel-drive or all-wheel-drive vehicles with no low-range gears or two-speed transfer cases.

Before the team makes the trip to base camp for the rally’s start October 7, Bassett and Bowman, racing and documenting their story as team “The Wanderettes,” traveled to Ridgecrest, California for Rebelle U, a comprehensive training program offered by the rally with a curriculum focused on the skills needed to compete. The duo also spent time with the Cayenne S at Pismo Beach on California’s Central Coast for driving instruction in the Oceano Dunes. During the Rebelle Rally, the Wanderettes will be faced with a plethora of challenges, ranging from compass and map navigation and hidden checkpoints, to 12-hour days and an overnight marathon stage. Temperatures in the desert can drop below freezing overnight and top off into the 100s during the day, testing the stamina of both driver and SUV.

The rally is the reason to drive a Cayenne to its limits, but the journey is for the community Rebelle Rally has built. Bassett is a freelance journalist who previously attended the rally on assignment and was drawn to the shared passion of those in the race.

“Last year, I spent three days at the end of the competition with the teams participating and absolutely fell in love with Tribe Rebelle,” said Bassett. “It felt like coming home to a group of women who shared similar passions for the outdoors, adventure and vehicles. They were incredibly supportive of each other and I really wanted to experience the adventure myself.” It wasn’t difficult for Bassett to convince her longtime friend Bowman, an avid adventurer and photographer, to travel across the country from her Tennessee home to get in the Cayenne with her.

“I love a good adventure and love encouraging women to push their boundaries and realize how capable they truly are,” said Bowman. “It takes a lot of trust and I am so excited to share this experience with Abby. Something tells me we’ll be talking about it for the rest of our lives.”

There were some final bits of business sorting out the SUV. Bassett and Bowman weren’t doing this alone, and felt it necessary to give the Cayenne a name, landing on Ruby as a reference to the black and Bordeaux interior of the vehicle. And while Ruby looked good in Jet Black Metallic, it didn’t quite capture the moment. She was instead wrapped in Gulf Orange, and a swooping stripe now flows down the sides of the Cayenne, accented with a geometric pattern laid over the Racing Yellow.

Bassett, Bowman and Ruby have finished their preparation, and are understandably excited and anxious for the start of this year’s Rebelle Rally. The team has the backing of superior Porsche performance and engineering to make light work of the obstacles in the field, and will be leaning heavily on each other to carry them through the tougher mental hurdles that can arise.

“At least in our experience, there is a part of almost every adventure where you think, ‘I don't want to do this anymore,’” said Bassett. “That is often when you need to push through because some really amazing things are about to happen. Stick with it. Push through. And don’t forget to take some pictures along the way." 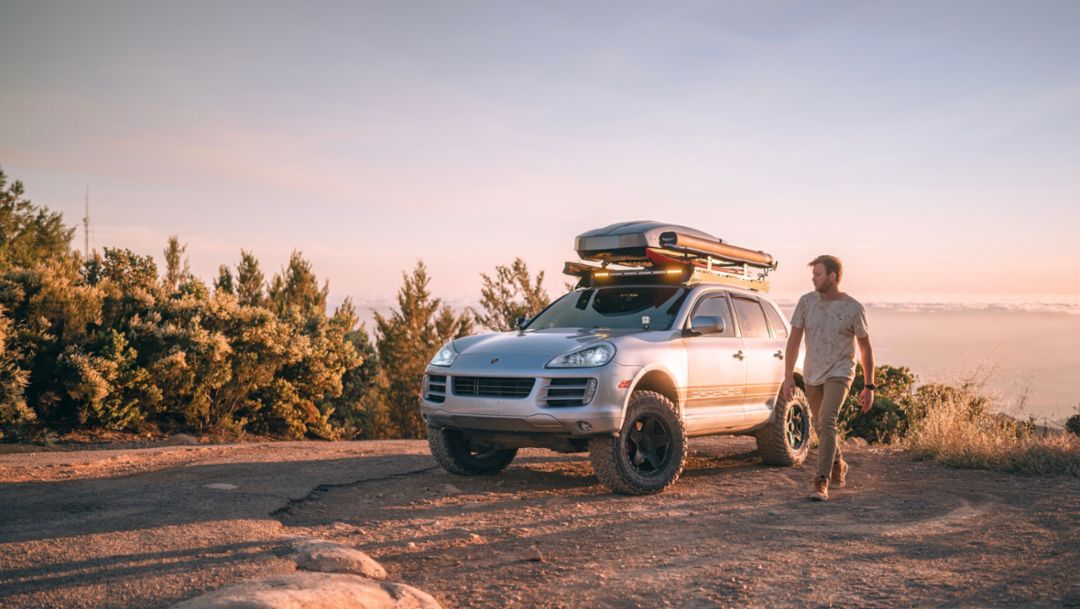 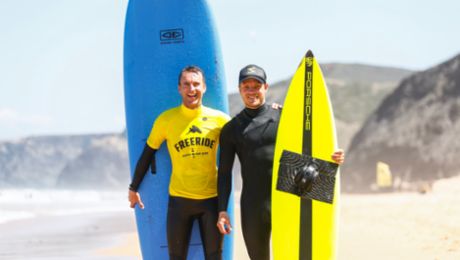