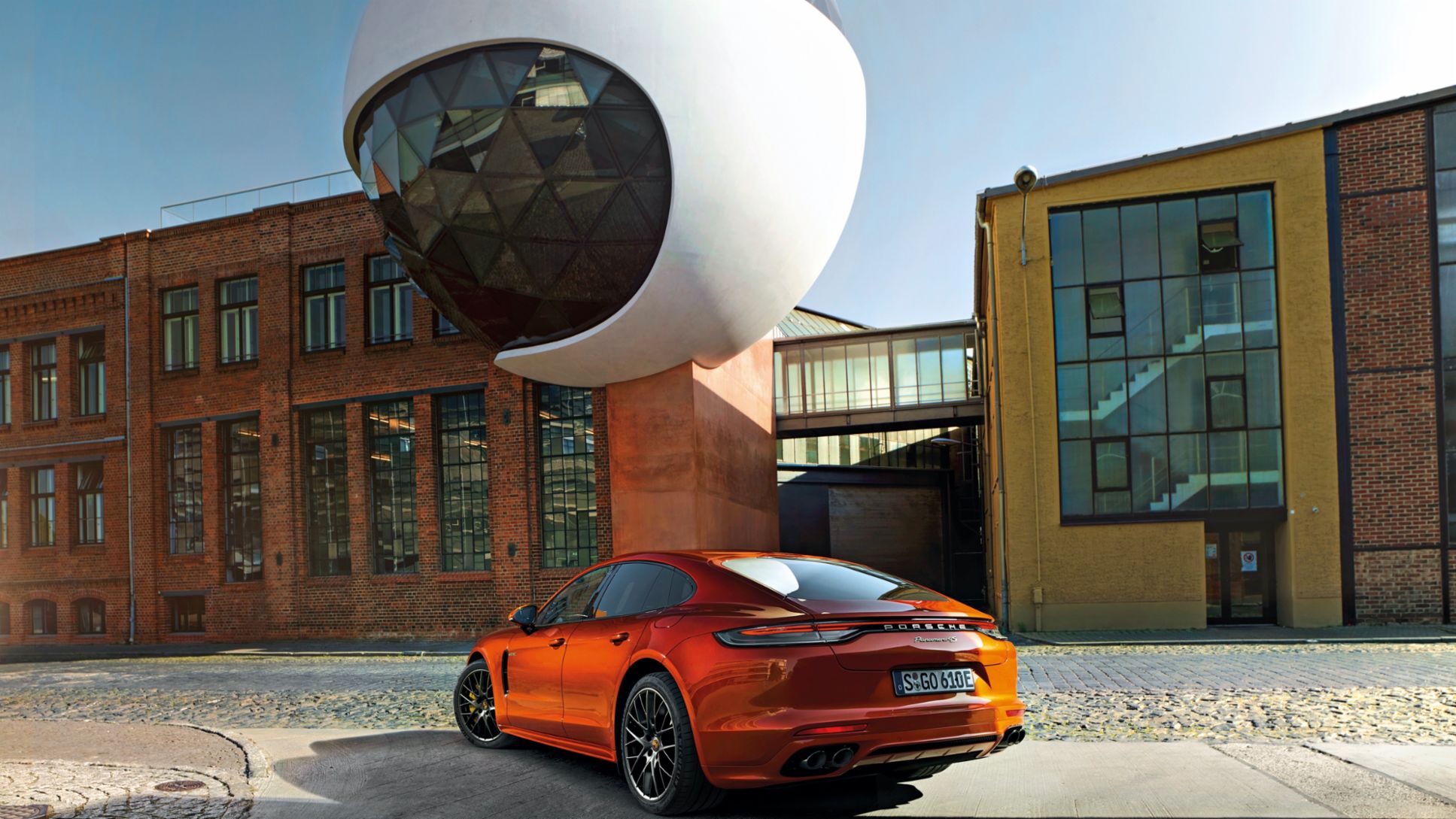 It’s here in every corner of the city. Not loud, not strident, but subtle and sophisticated. Pleasing and well-tempered. Everyone who hears it once will always associate Leipzig with music. All the more so when they encounter Yun-Jin Cho, the brilliant violinist for the renowned Gewandhausorchester—as she directs the new Porsche Panamera.

The Panamera 4S E-Hybrid glides across Augustusplatz on electric power, barely louder than a whisper, and comes to a stop directly in front of the new Gewandhaus. The centre of Leipzig is also the epicentre of its music. On approaching this angular temple of tones, there is a natural desire to move softly and reverently. The great composers live on in their works here; the world’s largest professional orchestra plays here. With 185 musicians today, its roots go back to the year 1479.

We meet Yun-Jin Cho. She personifies the here and now – and also stands for the future of the Gewandhausorchester. This South Korean violinist came to the Saxon city in 2008 and stayed. Today she is the venerable orchestra’s Deputy 1st Concertmaster and is considered one of the best on her instrument worldwide. At the age of 15 she left her home town of Seoul because she wanted to study music abroad. Her extraordinary talent was apparent even then. Boston was the original destination of her dreams, but fate brought her to Berlin in 1998. Completely on her own, she began her studies. Ten years later she auditioned in Leipzig. “The orchestra has always had a fantastic reputation,” says Cho as we stand in front of the Gewandhaus. She smiles as she admits, “At the time I didn’t realise how deeply the roots of classical music run in this city.”

Music history at every corner

She won the position that would change her life, and proceeded to discover the city on her own terms. “When I’m in one of the traditional cafés, I imagine how Robert Schumann might once have sat there himself and composed a melody. Wherever you go in Leipzig you feel like you’re walking in the footsteps of great musicians.”

Cho gets into the back seat of the Porsche Panamera 4S E-Hybrid. “How wonderful, I can control the sound system from here,” she says with pleasure, directing the sports saloon to the Musikviertel (music quarter) of Leipzig, where rows of well-preserved villas bear quiet witness to remarkable early years in the city’s history.

By the 15th Century, the city had already become one of the most important hubs of trade between eastern and western Europe. The cosmopolitan metropolis had money, and its cultural life thrived. A magistrate appointed three musicians to accompany festivals and ceremonies at theatres and the city hall as well as at church services. The programme was so well received that it continued on until 1840. The musicians also performed with the orchestra of the Große Concerte, or Grand Concerts. Founded in 1743, its performances were attended by both the aristocracy and bourgeoisie.

For 30 years, audiences enjoyed regular concerts at an establishment called Zu den drei Schwanen („At the Three Swans“). The city’s culture of fine music soon acquired a prominent reputation beyond its borders. A larger space was needed, which led to the name Gewandhaus, meaning “cloth-makers’ hall.” The large upper floor of their trading hall was not being used at the time, and was converted into a concert hall at the urging of the mayor. The first concert in the Gewandhaus took place in November 1781, and Leipzig became a key site on the musical map of Europe.

Cho directs the Panamera to some of the sites that reflect this grand tradition. Leipzig’s picturesque Musikviertel is now home to the Felix Mendelssohn Bartholdy University of Music and Theatre. This is where Cho teaches. “At the oldest university of music in Germany,” she notes with pride before we continue gliding along our trail of notes. We pass the impressive New City Hall, cross Roßplatz, turn right, turn left twice, and find ourselves in front of a classical-style building that was once the residence of the Schumanns. “This is where Robert and Clara Schumann spent the first four years of their married life,” says Cho. “The bride was only 21-years-old when they moved in.”

Today the building houses a museum, event space, and educational facilities. It shows how the couple lived and where they welcomed famous fellow musicians such as Felix Mendelssohn Bartholdy, Franz Liszt, and Hector Berlioz. Here, at what is now Inselstraße 18, was where Robert and Clara Schumann composed the Love’s Springtime lieder cycle (Op. 37) and Robert the Spring Symphony and Piano Quintet in E-flat major (Op. 44). “By the way, Clara played the piano for the quintet’s premiere at the Gewandhaus,” adds Cho, beaming.

Wolfgang Amadeus Mozart headed off the list of great musicians in Leipzig. In 1789, two years before his early death, he paid the Gewandhaus the honour of a concert. Ludwig van Beethoven’s nine symphonies were performed for the first time as a cycle here during the 1825–1826 season, when the composer was still living. Felix Mendelssohn Bartholdy became Kapellmeister (director of music) of the Gewandhaus in 1835. Leipzig was where his Scottish Symphony and Violin Concerto in E minor (Op. 64) premiered.

He conducted premieres of Robert Schumann’s symphonies and Franz Schubert’s great Symphony in C major at the Gewandhaus. In 1862 Richard Wagner conducted the premiere of his Meistersinger prelude here, and in 1879 Johannes Brahms did the same for the premiere of his only violin concerto. It was a century of music – and Leipzig was its stage. Composers produced fireworks that continue to light up the musical heavens to this day. The city has always exerted an irresistible attraction on great artists. Some came for a few months, other stayed for years.

Like star violinist Yun-Jin Cho. Wishing to show us another and more modern side of the city, the young musician takes the wheel herself. “New developments in Leipzig are so colourful and dynamic!” she says while steering the Panamera effortlessly through the city. This is the home of the plug-in hybrid sports sedan with 412 kW (560 PS; Panamera 4S E-Hybrid: consommation de carburant en cycle mixte (WLTP) 2,8 – 2,2 l/100 km, émissions de CO₂ en cycle mixte (WLTP) 64 – 51 g/km, consommation électrique en cycle mixte (WLTP) 24,5 – 22,6 kWh/100 km, Autonomie électrique combinée (WLTP) 46 – 53 km, Autonomie électrique en zone urbaine (WLTP) 49 – 54 km) The model series has been produced at Porsche’s Leipzig plant since 2009. Cho likes the Papaya Metallic paint on our vehicle. “The car fits the city perfectly,” she remarks. “It’s as multifaceted as a great piece of music – sometimes fiery and passionate, and other times gentle and sensitive.”

She describes some of the changes to this city of roughly 600,000 that she herself has experienced. Over the past few decades it seems to have awakened from a slumber. Thirty years after German reunification, its cultural, social, and culinary offerings shine once again. Companies like Porsche and BMW have played a key role in this process, thanks to their new production sites that have had a turbocharging effect on the region. Prosperity and culture are flourishing in this part of Saxony.

This is also evident when we stop for the last time at an old factory on the edge of the Lindenau district. What used to be continental Europe‘s largest spinning mill is now known the world over for a different reason. The Guardian newspaper declared the Spinnerei “the hottest place on earth.” Major figures like the painter Neo Rauch have their ateliers here. The way art boldly appears to rise from the walls of the old brick building can be seen right around the corner, where a gigantic glass and concrete sphere is enthroned atop the Kirow Ardelt crane company.

The Niemeyer Sphere is one of the last works by Brazilian star architect Oscar Ribeiro de Almeida Niemeyer Soares Filho, who died in 2012 at the ripe old age of 104. “It’s like history is repeating itself,” observes Yin-Jin Cho enthusiastically. “Like with classical music centuries ago, the city is experiencing another renaissance in art. It radiates magic and has a magnetic quality – I myself will certainly remain true to it.” 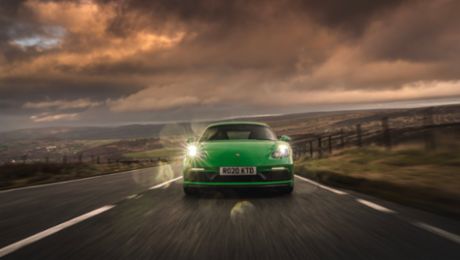 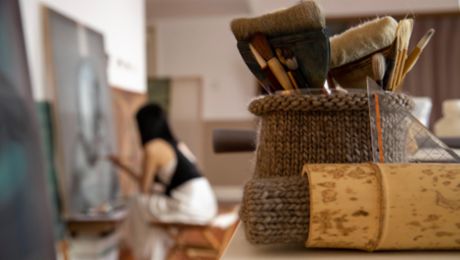