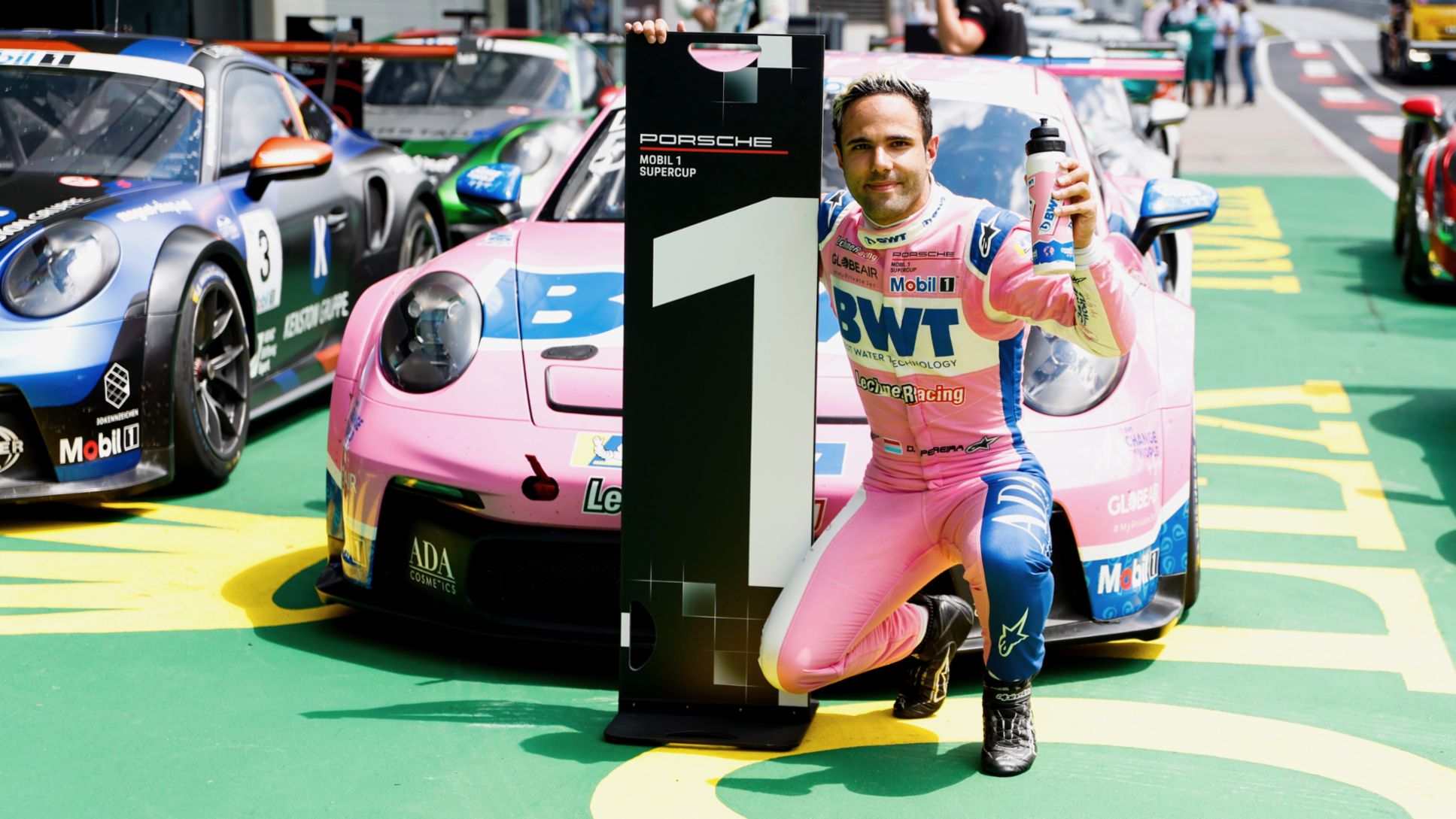 A commanding lights-to-flag victory for Dylan Pereira at round four of the Porsche Mobil 1 Supercup: On the Red Bull Ring, the Luxembourger from the BWT Lechner Racing team converted his pole position into his second win of the season.

For BWT Lechner Racing, the Supercup race on the Red Bull Ring in Styria was a home event. The Austrian squad did not disappoint the ca. 40,000 fans who visited the Formula 1 circuit near Spielberg: Dylan Pereira from Luxembourg as the winner, Bastian Buus from Denmark claiming third overall and UK driver Harry King in fourth place – each at the wheel of a Porsche 911 GT3 Cup fielded by the team. Only the German Porsche Junior Laurin Heinrich (SSR Huber Racing) managed to plant himself on second place between the protégés of Robert Lechner, who also contested the Supercup during his active race career. Bad luck, however, plagued the points’ leader and reigning Supercup champion Larry ten Voorde: Driving for GP Elite, the Dutchman was running in second place with his ca. 375 kW (510 PS) 911, when he became the unwitting victim of an accident and was thrown out of contention.

Thomas Laudenbach, Vice President Porsche Motorsport, was impressed by the fourth round of the Porsche Mobil 1 Supercup season at the Red Bull Ring: “Thirty years of the Porsche Supercup – that’s an extraordinary time span for the international flagship of our one-make cups. Such success is only possible thanks to the professionalism of everyone involved, from the drivers and the teams to the organisers. In Spielberg, we once again witnessed a race packed with gripping fights for positions. That’s great motor racing and it’s exactly what makes the Supercup so special.”

With battles for positions raging behind him, Pereira controlled the race from the front of the pack. The Luxembourger maintained his rhythm even through the two short neutralisation periods due to the safety car. On both occasions, he managed to defend his lead. “I’ve experienced worse restarts. My car ran perfectly today so I’m completely satisfied. The fact that I’m now leading the championship is something I didn’t expect,” admitted Pereira after the 18-lap race.

Porsche Junior Laurin Heinrich was also extremely pleased with his second place. “I got off the line well and I was able to overtake Harry King in the first corner. Larry, however, was a tough nut to crack at first. Instead, I was busy defending myself from Marvin Klein. In my rear-view mirror, I noticed his overtaking attempt, which ultimately threw Larry out of the race, and managed to could foil them,” explains the 20-year-old German. Heinrich wrapped up the first half of the season in second place, just two points behind the series leader Pereira.

In the rookie category, Bastian Buus remains undefeated at race four in his debut Supercup year. The Dane made up six places in the race – a feat no one else in the leading group managed to do. “I’m lost for words, it’s simply incredible,” grinned the 19-year-old. “We all work very well together at BWT Lechner Racing, and we push each other to achieve top performances. I’m learning a great deal from Dylan and Harry,” said Buus in praise of his teammates.

In the ProAm classification, too, spectators were treated to a home win: Austrian Philipp Sager from Dinamic Motorsport won his class for the first time this season. The trophy was presented to him by Dr. Wolfgang Porsche, Chairman of the Supervisory Boards of Porsche Automobile Holding SE and Dr. Ing. h.c. F. Porsche AG.

In a fortnight, the teams travel to Le Castellet to contest round five of the season. The Porsche Mobil 1 Supercup heads into the second half of the season at the Circuit Paul Ricard as support to the French Grand Prix (14 July 2022).

The top four drivers in the Porsche Mobil 1 Supercup standings have locked out the first two grid rows at the Red Bull Ring for round four of the season. Dylan Pereira, currently third overall, set the fastest time. “The race director voided my first flying lap because I went off the track at one point. So during my second attempt, I concentrated even more on the ‘track limits’ – and that worked perfectly,” said the Luxembourger with a smile. “There are no points for qualifying, so I’m very pleased,” stated Harry King. The Brit, who also qualified on the front grid row, was just 71-thousandths of a second slower than his teammate Pereira. “First and second place is great for BWT Lechner Racing. Now we need to do this again in the race,” concluded King.

Larry ten Voorde was also satisfied with his third qualifying result. “I came 13th in Friday’s free practice, which showed that we didn’t have things sorted at that point. It went better in qualifying. Before the race we’ll tweak other details on the car – obviously, I’m not going to reveal exactly what those details are,” laughed the reigning Supercup champion and current leader of the overall standings. He shares the second grid row with his closest rival, Porsche Junior Laurin Heinrich. Ahead of the race on Sunday, the SSR Huber Racing driver lies nine points behind ten Voorde in the overall standings.

Aksel Lund Svindal has achieved everything on skis: The Norwegian has been crowned world champion fives time, he has won two gold medals at the Olympic Games and the overall World Cup twice. Moreover, Svindal is a real ‘petrolhead’: this season, the Porsche ambassador drives a 718 Cayman GT4 Clubsport in the Porsche Sprint Challenge Scandinavia – as the teammate of another successful skier, Ingemar Stenmark from Sweden.

At the Red Bull Ring, Svindal got his first breath of Supercup air and was impressed by the high level of competitiveness in the international one-make cup with the Porsche 911 GT3 Cup. “The fact that the fastest 21 drivers are within one second shows the professionalism of the teams and that the cars are all really on the same level,” analysed the 39-year-old. The friendly atmosphere among the drivers also left a deep impression on him: “Out on the track, they fight for every centimetre and hundredth of a second, but when they step out of the cockpit, they have great fun together, no matter what nationality they are. That reminds me of my time in downhill skiing,” observed Svindal, who has won 36 World Cup races throughout his career.

Of course, Svindal is also a Formula 1 fan. “But the performance of these cars is beyond the imagination of a normal driver. Spectators can assess a Porsche 911 GT3 Cup on the racetrack much better. I can relate to the driver and his reactions,” he describes. Svindal has an astonishing explanation for why skiers are usually quick to improve on the racetrack. “In a racing car, like in downhill skiing or slalom, it’s all about correctly assessing the grip conditions. You adjust your line at every turn according to the grip of the tyres on the track or the skis on the snow.”

In 1993, Altfrid Heger won the Porsche Supercup in the first year of its existence. At the Red Bull Ring, the German from Essen caught up with the current state of affairs in the international one-make cup with the Porsche 911 GT3 Cup, which is now in its 30th season. “One of the main differences compared to 1993 is the car: the 911 Carrera RS that we drove back then was more or less a production car. It was wild to drive. The latest 911 GT3 Cup is a real racer that requires precision driving,” said the 64-year-old, who still occasionally climbs into a racing cockpit. “One thing hasn’t changed: Just like in my era, the Supercup serves as a stepping stone into higher levels of motorsport.”

With his Hegersport agency, the maiden Supercup champion organises the Porsche Carrera Cup Deutschland and has also supervised the popular Porsche Sports Cup racing series in Germany for the last 18 years. “I’m proud that youngsters from the Porsche Sports Cup keep making it into the Porsche Mobil 1 Supercup,” explains Heger. The latest example of this is the current Porsche Junior Laurin Heinrich, who contested the 2019 Porsche Sports Cup at the wheel of a 911 GT3 Cup.

The reigning champion Larry ten Voorde has delivered an exceptional performance at round two of the Porsche Mobil 1 Supercup in Monte Carlo (Monaco).