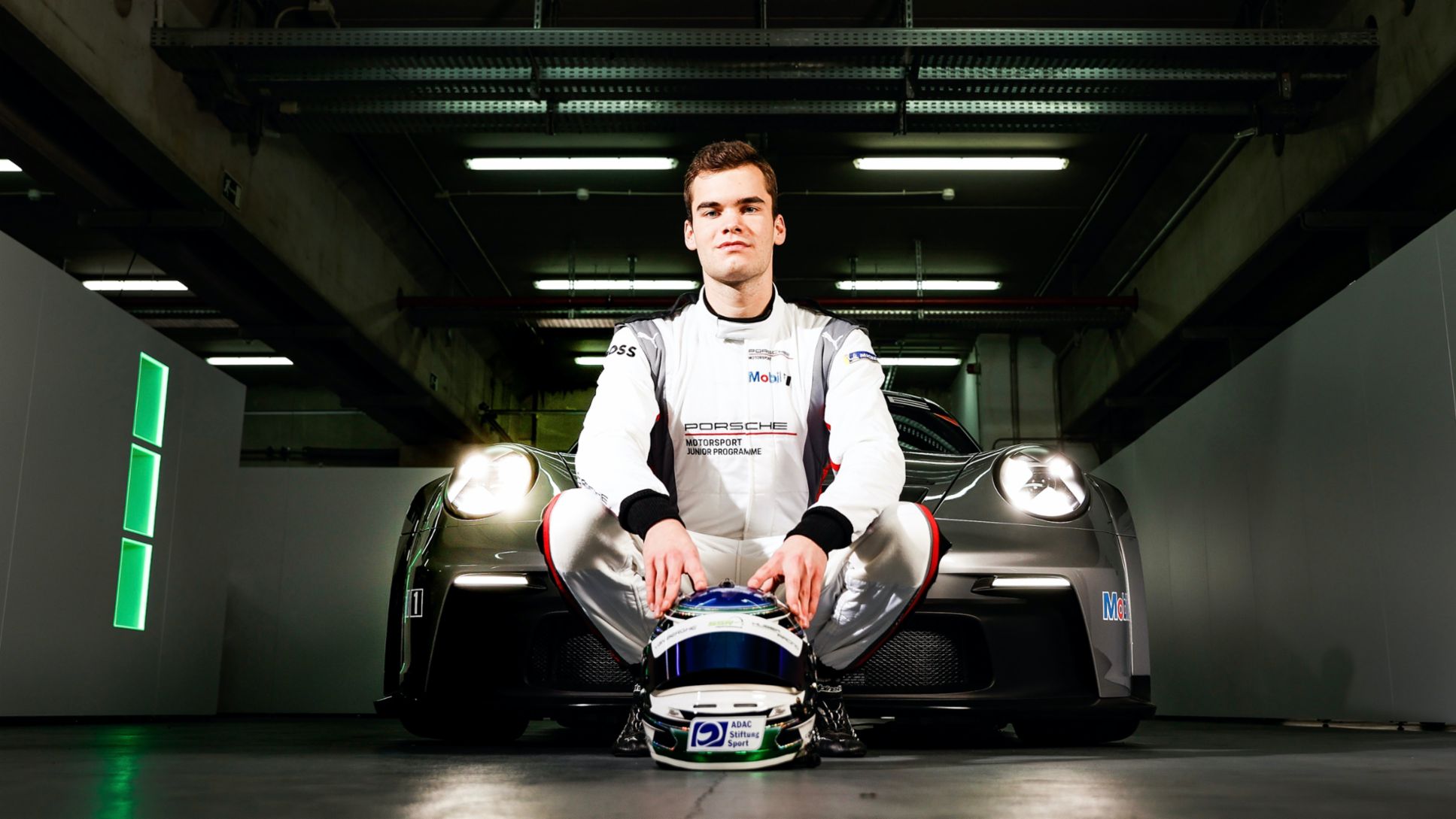 Laurin Heinrich is the new Porsche Junior for the 2022 season. In a selection process in Aragon (Spain), the 20-year-old German from the Würzburg region beat eleven candidates from the worldwide Porsche Carrera Cups.

The talented youngster receives a sponsorship package from Porsche Motorsport that includes 225,000 Euros towards the upcoming Porsche Mobil 1 Supercup season. At the wheel of the 911 GT3 Cup, Heinrich claimed the rookie classification title and also won a race in the international series last season. The passionate sim racer is a textbook example of Porsche Motorsport’s successful junior development initiative: In 2019, the young German won the Porsche Sports Cup, clinched the rookie title in the Carrera Cup Deutschland the following year and went on to contest a successful 2021 season in the Porsche Mobil 1 Supercup.

At this year’s shootout in Spain, twelve candidates got the chance to showcase their skills in changeable weather conditions. In addition to pure speed, the selection criteria included mental and physical fitness, a technical understanding and an ability to work alongside race engineers as well as their interaction with the media. “Our selection process of the young drivers from the Porsche Carrera Cups around the world has shown time and again just how valuable the driver training is. The benchmark at the event in Aragon was extremely high,” outlined Thomas Laudenbach, Vice President Porsche Motorsport. “We’re delighted to offer Laurin Heinrich our support and assistance as the new Porsche Junior over the coming season. The concept of the Porsche Motorsport pyramid has proven itself over decades and in many cases has helped talented youngsters climb the career ladder to become works drivers. We want to continue this.”

“The twelve highly talented participants who took part in the three-day Porsche Junior shootout at the Motorland Aragon made the decision very difficult – but in the end it was clearly in favour of Laurin Heinrich,” explains Sascha Maassen. The former Porsche works driver accompanies the junior driver to all Supercup races as a coach. “The fact that Laurin can drive the 911 GT3 Cup really fast is obviously one of the most important basics for an aspiring professional – but as the defending Supercup rookie champion and Zandvoort race winner, he didn’t have to prove much more. But he did impress us with his general attitude and mental maturity, which was remarkable for a 20-year-old. Overall, he turned out to be the best allround package with the greatest potential for development.”

Laurin Heinrich began his motor racing career at the age of ten in a kart. He contested his first full season as a 14-year-old high school student and went on to secure three rookie wins in Formula 4 in his father’s private team. After taking a break from racing due to budget constraints, the swift young man threw himself into the fierce competition of the 2019 Porsche Sports Cup. With success: he beat more than 40 rivals and took home the GT3 title. In 2020, the German tackled the Porsche Carrera Cup Deutschland and finished on the podium four times during his debut season. Ultimately, he took fourth overall and the honour of being the best newcomer. Last season, Heinrich achieved two race wins in the German one-make cups series, including a “Grand Slam” in Oschersleben: pole position, fastest race lap and first place. He repeated this feat at the wheel of Huber Racing’s Porsche 911 GT3 Cup at the 2021 premiere of the Porsche Mobil 1 Supercup at Zandvoort.

“I wasn’t at all familiar with the Dutch racetrack, and this year was the first driving the new 911 GT3 Cup – but it worked. I think I’m a quick learner and I avoid making the same mistake twice. Plus, I usually stay pretty relaxed and calm,” said the 20-year-old, describing his strengths. The tough lessons from 2017 and 2018 made an impact: After the big successes in his father’s Formula 4 squad, he took a mandatory break for a year. “It became very clear to me than nothing should be taken for granted, and it added fuel my fighting spirit.” This attitude was one of the key factors in Heinrich’s successful bid to become the 2022 Porsche Junior. “I was blown away when I got the call from Porsche to tell me the good news – it’s a dream come true! At that moment I felt immense joy and relief because I hadn’t slept well for several nights.”

Porsche Junior for 2022: There can be only one goal

Laurin Heinrich often familiarises himself with track layouts and refines his skill in the racing car in his simulator at home. “I always drive a Porsche in the simulator,” he reveals. “Unlike other models, the 911 feels like a real racing car in the virtual world – many of my colleagues who drive for other manufacturers agree.” Because he has set himself high goals for real racing, esports will take a back seat early next year. “I learned a lot in the Porsche Mobil 1 Supercup and the Carrera Cup in 2021. That helped me to develop into more of a rounded racing driver. There is only one goal for me: I want to win the 2022 Porsche Mobil 1 Supercup. As a Porsche Junior, I can’t have any other motto!” A display case in his father’s car dealership is packed with cups and trophies. “The shelves are already sagging under the weight, but I’m sure we’ll find room for more,” he grins.

In addition to Sascha Maassen’s support, the sponsored youngster is provided with sports medicine and sports science training from the University of Potsdam – just like the Porsche works drivers. Media seminars and psychological training are also part of the instruction content on the path to becoming a professional racing driver. Moreover, Laurin Heinrich will be involved in marketing activities and PR events.

In 2022, the Porsche Mobil 1 Supercup will again include eight races run as part of the European Formula 1 race weekends. Porsche’s exemplary youth development initiative has served as a springboard into a professional racing career for the last 25 years. Many works drivers, world champions and Le Mans winners have emerged from this development programme. The careers of Timo Bernhard (Porsche Junior 2000 to 2001), Marc Lieb (2000 to 2002) and Earl Bamber (2014) are prime examples: All three have won the legendary Le Mans 24 Hours with the Porsche 919 Hybrid at least once and have clinched titles in the FIA World Endurance Championship.

Larry ten Voorde has been crowned the champion of the 2021 Porsche Carrera Cup Deutschland.

A perfect ending to the Porsche Esports Carrera Cup Deutschland season for Maximilian Benecke: The German was crowned the new champion.

Larry ten Voorde has won the Porsche Mobil 1 Supercup title for the second time in a row.