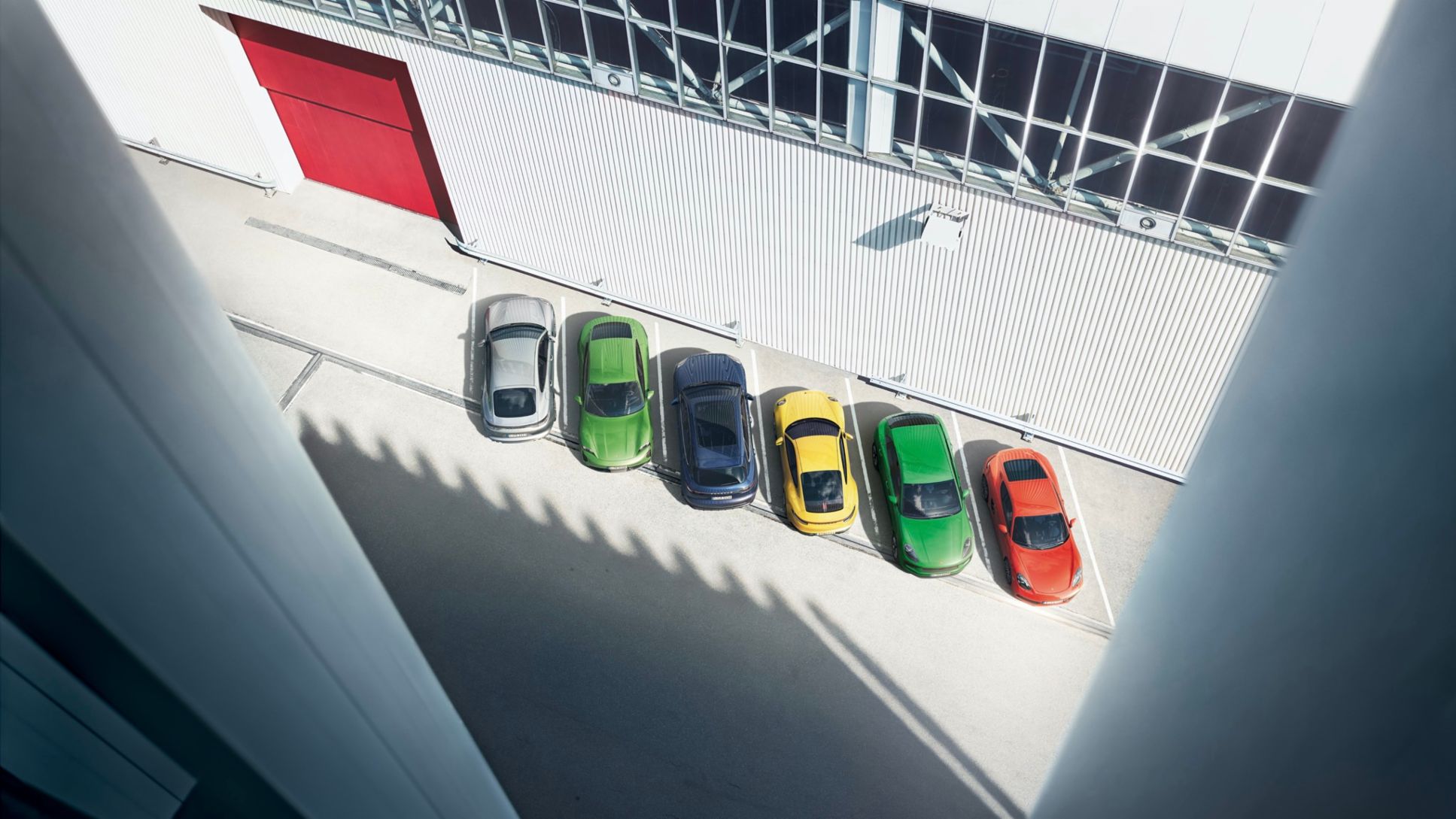 Terminology at Porsche: do you understand the Porsche code?

Every Porsche model has an official name and an in-house type number. Sometimes the two are identical, sometimes not – the Porsche Newsroom explains.

Some dreams are difficult to capture in words because they have such long names. One example is the Porsche 356 A 1500 GS Carrera, which, in 1955, conjured up a blissful expression on the faces of car enthusiasts the world over. Visually and technically, the elegant sports car was superb: “Look, there goes a Porsche three five six A fifteen hund …” and it had already zoomed past with its top speed of 200 km/h.

Admittedly, names can be complicated. Often, however, there is a logical explanation for the model designations: the Porsche 356 A 1500 GS Carrera model, for example, originated from the Porsche 356 and was part of the refined A series. It had an impressive engine capacity of 1,500 cc (or 1.5 litres) and was labelled as especially swift by the suffixes of GS (Grand Sport) and Carrera (Spanish for ‘racing’).

Porsche devotees juggle these abbreviations and codes with skill: the 356 and 911, 964 and 993, GTS, GT and S, Carrera, Spyder, Speedster … they are all part of the Porsche cult – and every mystique has its own code. Yet for many enthusiasts, the typology of Porsche can be confusing. How can a car be called a 911 and a 991 at the same time? Is that a Boxster there or a 987? Or is it a 982? And what do the 4, the S or the Executive mean on the current models? Here are two practical aids to help you crack the Porsche code.

One number for each order

In order to understand the beginnings of the in-house numbering method, it is necessary to go back to 1931. Each order and every project of Ferdinand Porsche's newly founded engineering design office, Dr. Ing. h.c. F. Porsche GmbH, was given a consecutive number: the in-house type designation. It started with seven: the design of a saloon car for the German car manufacturer Wanderer. Number 22 became the legendary Auto Union Grand Prix racing car and the Type 60 was the Volkswagen. The numbers therefore rose with each new order, with each engine designed, with each drawing for an axle, gearbox or tractor. On 8 June 1948, by which time the project numbers had climbed to 356, a novelty came about: for the first time an automobile was to be made under the official brand name of Porsche. And it was called the Porsche 356.

This not only marked the birth of a legendary brand, but also an iconic model with a memorable design. The 356 underwent further development with each new model year. Substantial advances in development were indicated by adding the letters A, B and C.

The engineers in Zuffenhausen and Weissach retained this system. Order receipts were plentiful – there were test engines, naturally aspirated engines, water turbines, racing cars – and the internal numbers were rising faster and faster. In some of the new sports car types, Porsche again used the internal plant code for the official model name, as was the case in 1953 with the spirited mid-engined Porsche 550 Spyder.

Yet, it was the successor to the 356 that led the sports car manufacturer to abandon the custom. In view of possible future cooperation with the Volkswagen plant, the new Porsche had to be compatible with the figures used there. As the 900 numbers had not yet been allocated in Wolfsburg, the decision-makers at Zuffenhausen chose 901 for the six-cylinder version and 902 for a subsequent four-cylinder car. However, an unexpected problem arose: Peugeot stated that they had been using three-digit numbers with a zero in the middle since 1929 and therefore owned the legal rights to all similar number sequences in France. The zero was quickly replaced by a one, and the ‘1’ typeface, which had already been created, was simply duplicated for the brochures and type name on the rear of the vehicle. A legend was born, officially christened with the 911 name. In 1964, no one could have guessed that this stopgap solution would one day be world-famous.

Expansion of the model range

Of course, the 911 did not remain the only model line within the Porsche company. The 914 marked the addition of a smaller, lighter mid-engined sports car, and over the years models such as the 924, 928 and 944 joined their elder sibling. They also received their internal number as model names. By now, the practice of using three digits starting with a nine had established itself worldwide as being synonymous with the reliable sporting character from Zuffenhausen.

Soon, the 900 numbers began running out and competing with each other, but the engineers stuck to their system out of tradition. In addition to the various road-legal models, pure racing cars also had to be allocated internal type numbers. One example is the legendary 917: unveiled at the Geneva International Motor Show in 1969, this extreme athlete secured overall victory at Le Mans a year later – the first of many racing successes in the first half of the 1970s under the 917 code.

Flexibility became increasingly in demand when it came to naming all the Porsche models. The 911 is a clear illustration of this: in the 1968 model year, the series received the internal designation of ‘A Series’ for the first time. In 1969, the B Series followed, then in 1970 the C Series, up until the substantially redesigned G Series, which was presented in 1973. However, special models within the series also received their own type number from time to time, as was the case with the internal Type 930, named the 911 Turbo or the Type 954 (911 SC RS).

In 1988, a major break occurred in the 911 history with the introduction of the completely redesigned 964 model series. The 993 followed in 1993. Then the 996, 997, a return to 991 and the current model 992. Between the internal codes of the 911, there are still further models to be found, with examples being the Carrera GT (internally known as the 980), the Boxster (the 986 being the first generation, followed by the 987 second generation, the 981 and the 982) and the Cayenne (955). The tradition of the three-digit type codes is maintained today – albeit with a certain degree of creative freedom.

In addition to the official designations and the in-house type numbers, the Porsche employees also give some models affectionate nicknames: one model of the 356, for example, was known as the ‘Dame’, the 917/20 version of the Le Mans racing car is remembered as the ‘Sau’, or ‘Pink Pig’. But that is another story entirely. Apart from the official model names, there are also various suffixes to describe the numerous different model versions. Below is an overview.

Carrera
Originally, ‘Carrera’ was the name of the Type 547 four-camshaft engine designed by Dr Ernst Fuhrmann. Porsche later used this suffix for the most powerful engine versions, such as the 356 A 1500 GS Carrera or the 911 Carrera RS 2.7. However, Carrera has almost become established as a synonym for the 911 model series. The name comes from the Carrera Panamericana, a Mexican endurance race in which Porsche secured major successes with the 550 Spyder.

E-Hybrid
As well as the combustion engine, the E-Hybrid models also have an electric motor on board, which provides more power while ensuring the powertrain as a whole emits less CO₂.

Executive
The Executive models of the Panamera range have a stretched body, which primarily benefits the rear-seat passengers.

GTS
GTS stands for Gran Turismo Sport and was originally a homologation class for motor racing. The 904 Carrera GTS received this badge for the first time in 1963. In 1991, the 928 GTS revived the tradition. The GTS suffix is currently used to designate the especially sporty and exclusive models of a Porsche model series.

RS
The RS (RennSport, or ‘racing sport’) is a road-legal model that has been derived from its motor racing equivalent. The designation is, however, also used for particularly sporty models, such as the 911 RS America.

RSR
The RennSport Rennwagen, which translates as racing sport racing car, is a purely competition version and is not road legal.

S
S for ‘Super’ or ‘Sport’: a version with a more powerful engine. Today the S consistently stands for Sport and, in addition to the extra-sporty engine, hints at the equipment enhancements compared with the basic model.

Spyder
Originally coming from the coach-making term for lightweight, open carriages for two people, the name ‘Spyder’ at Porsche is reserved for open-topped mid-engined sports cars, just like ‘roadster’. The Boxster Spyder already has a legendary predecessor in the form of the 550 Spyder from 1953.

Targa
The 911 Targa is an open-roofed version of the 911, characterised by its distinctive roll-over protection bar and its fixed (rather than folding), removable roof section. The name comes from the legendary Targa Florio Sicilian road race and means ‘plate’ in English.

Turbo
These models have an engine with an exhaust gas turbocharger, which produces a powerful boost in performance.

CS
Available from 1992, the Club Sport (CS) version of the 968 had the same engine but had undergone streamlining for extra sporting character: without electric windows, rear seats and air conditioning, it may have been less comfortable but was significantly lighter and therefore faster than the regular 968.

GT
Similar to GTS, the Gran Turismo (GT) suffix signifies a sportier version of the basic model; the designation has its origins in motor sport, when it was used to homologate vehicles for the GT class. Appearing for the first time in 1955 with the 356 A 1500 GS Carrera GT, Porsche returned to the designation in 1989 for the 928 GT.

GT-Cup
Near-production racing version and not road legal, used, for example, in the Porsche Carrera Cup.

Speedster
In the Speedster models, the windscreen was significantly lower when compared with the basic model, which gave the car a more streamlined silhouette. In return, the driver had to sacrifice comfort in terms of the equipment provided.

T
Although it was also available as a Targa version, the T in the 911 T from 1967 stood for ‘Touring’ – and hence for a less expensive entry-level version of the classic vehicle with a less powerful engine.

With its decision to develop a ‘sporty multi-purpose vehicle’, Porsche presented its design department and with major challenges. 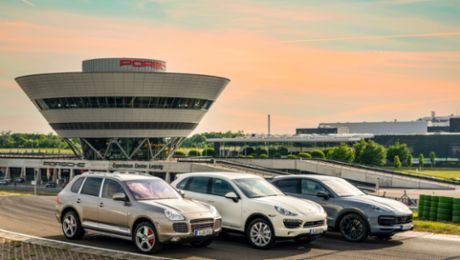