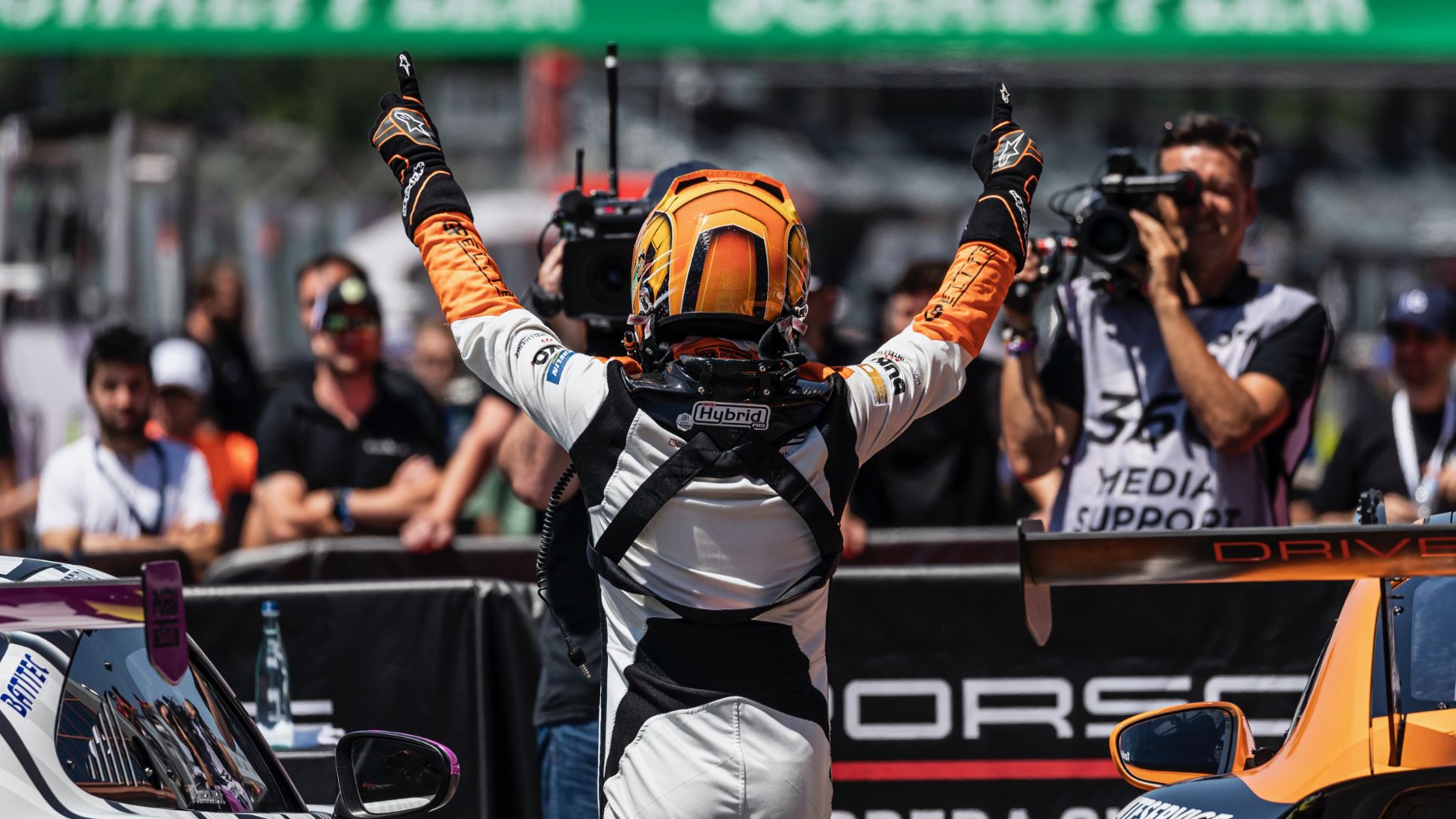 “In the previous races things didn’t go smoothly for me, so I’m happy that it’s finally worked out with my first win. You have to tackle Imola with complete concentration because every mistake can lead to one of the many gravel traps. But I’m a huge fan of this racetrack,” says ten Voorde. So far this season, six races have yielded four different winners. Second place went to ten Voorde’s fellow countryman Loek Hartog from the Black Falcon team, with Dylan Pereira (Luxembourg/IronForce Racing by Phoenix) completing the podium. At the race weekend run as support to the DTM, 31 drivers treated spectators at the Autodromo Enzo e Dino Ferrari circuit to some action-packed racing in their 375 kW (510 PS) Porsche 911 GT3 Cup.

With bright sunshine and temperatures of 32 degrees Celsius, the field faced challenging weather conditions. Ten Voorde took off from pole position, however Hartog attempted to get past before the first corner. In a duel between the two Dutchmen, ten Voorde defended his position and eked out an advantage of around two seconds over the first few laps. Using his experience, the 25-year-old two-time Carrera Cup champion controlled the race at the front to the flag.

Behind ten Voorde, the trio Hartog, Pereira and Porsche-Junior Laurin Heinrich (Germany/SSR Huber Racing) battled it out for the other podium spots. In a spirited early phase, Hartog defended his second place and ultimately pulled away from his pursuers. “In the beginning, I kept checking in the rear-view mirror. But I got faster lap by lap and managed to build a decent gap,” says Hartog. The 19-year-old is one of eight drivers from the Talent Pool, the one-make cup’s support initiative for promising youngsters. Pereira maintained his third place over the entire distance. “Unfortunately, I made too many mistakes to be able to achieve a better result. I have to improve on that in the next races,” resolved Pereira.

Although Heinrich has consistently finished on the podium in the first five races of the season, the 20-year-old narrowly missed out on a top-three result in Imola with fourth place. “At the start, I was on the outside line, so it was difficult to make up positions at first. I made several attempts to get past Dylan Pereira but I had to find the right balance so that the tyres and brakes didn’t overheat in his slipstream in the high temperatures,” states the German driver. Saturday’s winner Bastian Buus (Allied-Racing) took the flag in fifth place. While the Dane was overtaking Michael Ammermüller (Germany/SSR Huber Racing) in the last lap, he shunted his rival into the gravel trap and was subsequently handed a three-second penalty for this manoeuvre. Thus, the order after Heinrich was Max van Splunteren (Netherlands/Team GP Elite) followed by Ammermüller, Buus and Rudy van Buren (Netherlands/Huber Racing).

For the next two races, the Porsche Carrera Cup Deutschland travels from Italy to the Netherlands. The Circuit Zandvoort hosts rounds seven and eight this coming weekend (24 to 26 June) as part of the ADAC GT Masters support programme. Heinrich (128 points) travels to the Dutch North Sea coast leading the standings, followed by Pereira and ten Voorde (both 92 points). Nine Carrera Cup drivers and the GP Elite squad will tackle the doubleheader event west of Amsterdam in front of home crowds. The outfit under team boss Torsten van Haasteren is based in De Rijp, which is around 40 kilometres from the Circuit Zandvoort.

Points standings after 6 of 16 races

Bastian Buus has clinched his first victory in the Porsche Carrera Cup Deutschland in Imola, Italy. In temperatures of 34 degrees celsius, the decision went down to the wire in a spectacular final sprint, with several drivers chasing victory at round five of the season on the Autodromo Enzo e Dino Ferrari. “It’s a great feeling! At the restart after the safety car came out for the second time, I stuck close to Loek Hartog and then managed to get past him and take the lead,” says Buus. Second place at Saturday’s race contested as part of the DTM support programme went to Porsche-Junior Laurin Heinrich (Germany/SSR Huber Racing). Larry ten Voorde (Netherlands/Team GP Elite) took third place at the wheel of his Porsche 911 GT3 Cup.

The first grid row was locked out by polesetter Loek Hartog (Netherlands/Black Falcon) and Buus, two drivers from the Talent Pool, the youth development initiative of the German one-make cup. In a turbulent race with two safety car phases, Hartog held his own at the start but was only able to defend his lead until shortly before the end. Several minutes after the fully-electric Porsche Taycan Turbo S safety vehicle returned to the pit lane for the second time, the leading pack bunched together. With three laps to go, Buus took advantage of his rivals’ braking error to sweep past him. This win makes Buus (18 years and 363 days) the second youngest race winner in the history of the Porsche Carrera Cup Deutschland after today’s Porsche works driver Thomas Preining (18 years and 359 days). The youngster received his trophy from Thomas Laudenbach, Vice President Porsche Motorsport.

In the final moments, Heinrich also managed to squeeze past Hartog. “That was a hectic race. The last laps were particularly exciting. There were a lot of duels which resulted in a few incidents. Second place is a good result,” concluded Heinrich. For the defending champion ten Voorde, the 16-lap race proved eventful. After a collision early on, the 25-year-old dropped back to 15th place, only to put in a spirited charge through the field to claim the third podium step. “Unfortunately, I got caught up in another competitor’s accident which threw me back. Still, it turned out to be a great race for me. Of course, I benefited from the safety car phases, but I never gave up and I was rewarded for this,” says ten Voorde.

Victory in the ProAm category went to Carlos Rivas (Black Falcon). On the 4.909-kilometre circuit southeast of Bologna, the Luxembourger prevailed over the two German drivers Kim Hauschild (HRT Performance) and Jan-Erik Slooten (IronForce Racing by Phoenix). This is the Luxembourger’s fourth win in the ProAm class so far this season.

Heinrich maintains his lead in the Porsche Carrera Cup Deutschland after five rounds with 115 points. Second place is occupied by 20-year-old Pereira (76 points) and Buus (73 points). Round six of the season takes off on Sunday at 11.25 am CEST. RTL+, Germany’s leading streaming platform, broadcasts the race via live stream. The race can also be viewed on the Facebook and YouTube channels of the Porsche Carrera Cup Deutschland as well as in the Porsche Motorsport Hub.

Points standings after 5 of 16 races 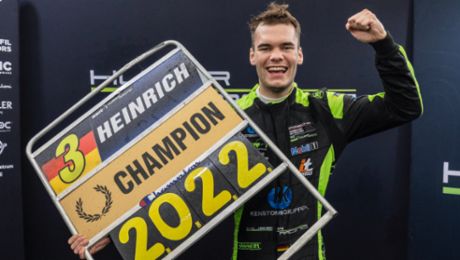 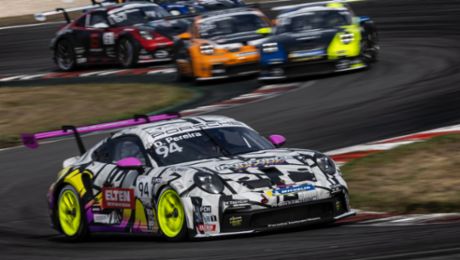