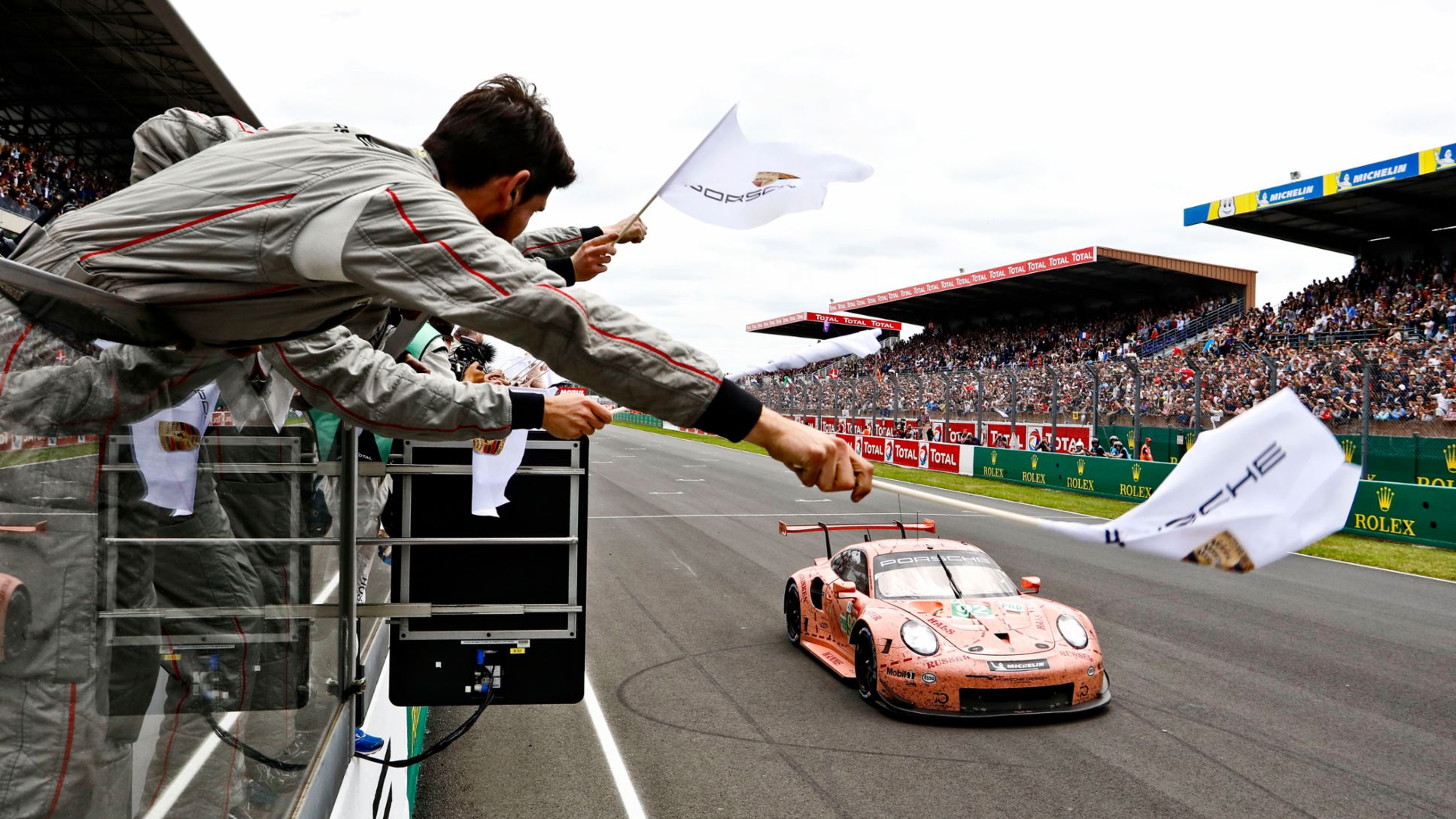 All information about the race can be found here.

For teams, drivers and fans, the 24 Hours of Le Mans is the highlight of the long-distance season. At the 86th running of the classic in 2018, Porsche celebrated its 106th and 107th class wins. To conclude the 2018/2019 Super Season of the Sports Car World Endurance Championship (WEC), four Porsche 911 RSR racers will again contest the GTE-Pro category in June 2019. Porsche travels to the highlight event in France already crowned as the world manufacturers’ champion. The works driver pairings Kévin Estre/Michael Christensen and Gianmaria Bruni/Richard Lietz will fight between themselves for the drivers’ world championship title.

The first Le Mans 24-hour race was held in 1923 in the French Département of Sarthe, about a two-hour drive west of Paris. Starting out as a 17.3-kilometre racetrack, it was shortened in 1930s, and today measures 13.626 kilometres. The greatest change came in 1990 with the addition of two chicanes along the almost five-kilometre Mulsanne straight. This reduced the top speed of prototypes from just over 400 km/h to around 340 km/h. Almost 75 percent of a lap on this circuit is driven at full throttle.

At the 24 Heures du Mans, competitors drive on one of the world’s few street circuits. Part of the racetrack consists of national roads on which vehicles normally drive from Le Mans in the direction of Tours. Drivers also have to adjust to the different track surfaces. This poses a huge challenge, especially in rain. Timo Bernhard describes the fascination of Le Mans like this: “I have a huge amount of respect for this track. In Le Mans it’s important to find a rhythm quickly, to optimise the speed and not to make mistakes. But you can’t control Le Mans, especially at night when lap times get faster, or when rain suddenly sets in. That’s simply Le Mans; there is a certain magic to it.”

Porsche as the most successful manufacturer

Porsche’s impressive success story at Le Mans began in 1970, with Hans Hermann and Richard Attwood clinching the first overall victory with a 917 short-tail. A year later, Britain’s Jackie Oliver caused a furore, lapping the then 13.469-km circuit with the Porsche 917 long-tail Coupé in 3:13.9 minutes and setting a new track record with an average speed of 250.069 km/h.

In 2008, Porsche customer teams celebrated a double victory in their class with the RS Spyder LMP2 sports prototype. The nimble carbon-fibre sports prototype from Weissach won again in 2009, and also took home the Michelin Green X Challenge environmental award thanks to its outstanding overall efficiency.

Notching up two more class victories in 2013, Porsche wrote another chapter in the history of the world’s most famous endurance race. The 911 RSR driven by Romain Dumas, Marc Lieb and Richard Lietz won the GTE-Pro class. In the second 911 RSR, their works driver colleagues Joerg Bergmeister, Timo Bernhard and Patrick Pilet made the double victory perfect for Porsche. The customer team IMSA Performance Matmut won the GTE-Am class with drivers Raymond Narac, Christophe Bourret and Jean-Karl Vernay. In 2015, US actor and racing driver Patrick Dempsey narrowly missed out on the GTE-Am class victory at the wheel of the 911 RSR, finishing second with Patrick Long and Marco Seefried.

Hattrick in the premier class

Porsche crowned its comeback to the top-class at Le Mans in 2015 with an impressive victory: The rookie crew of Earl Bamber, Nico Hülkenberg and Nick Tandy climbed to the top of the podium after an immaculate drive in the 919 Hybrid. The vehicle also served as a racing laboratory for maximum efficiency in future road-going sports cars with its groundbreaking downsizing turbocharged engine and two energy recovery systems. Driven by Neel Jani, Romain Dumas and Marc Lieb, the 919 Hybrid was successful the following year at the 24-hour classic in the Sarthe province, and in 2017 Brendon Hartley, Earl Bamber and Timo Bernhard achieved a hat-trick with the 19th overall victory for Porsche at the Circuit des 24 Heures.

As in 2018, Porsche will again run four factory cars at the 87th running of the Le Mans 24-hour race to mark the end of the 2018/2019 WEC season. The cockpit of the No. 91 vehicle is shared by Gianmaria Bruni, Richard Lietz and Frédéric Makowiecki, with the No. 92 car manned by last year’s winners Kévin Estre, Michael Christensen and Laurens Vanthoor. Sharing driving duties in the No. 93 car are Patrick Pilet, Nick Tandy and Earl Bamber. In the car with the starting number 94 sits works driver Sven Müller and Porsche Young Professionals Mathieu Jaminet and Dennis Olsen.