Filmed in mid-November 2019, the focus of the TV spot is the new, fully electric Porsche Taycan engaged in a chase with nine other iconic Porsche vehicles. Many of the vehicles are part of the Porsche Museum collection and required special preparation and handling during the production.

“We have a lot of experience preparing historic vehicles for all kinds of operations but driving a 917 through the center of Stuttgart, at night, was a first even for us,” explains Alexander Klein, Head of Vehicle Management and Heritage Experience at the Porsche Museum. “When we travelled to the location in the Black Forest the roads were covered in snow, and stayed that way until the evening before the shoot. We were prepared and had different tyre profiles and compounds with us, especially for the racing cars. We did not make any technical changes to the museum vehicles though.”

Behind the scenes of "The Heist"

Ten professional stunt drivers maneuvered the cars safely around the signature traffic circle outside the Porsche Museum, though the historic streets of Stuttgart, Heppenheim and Heidelberg, and over the Schwarzenbach dam in the Black Forest. One of the drivers was Harald Müller, a winner of the World Championship in drifting. The Porsche factory driver Lars Kern drove the iconic 917 K car. Overall, around 150 people were involved in the shoot.

Director Wayne McClammy of Hungry Man Productions used as many as four cameras at one time. Particularly noticeable was a Porsche Cayenne with a camera crane mounted on the roof, also called in the industry a “Russian arm." Aerial video was shot by two drones, including a racing drone with a speed of up to 100 miles per hour.

The TV commercial is part of a worldwide marketing campaign for the Porsche Taycan. After the Super Bowl, the video will also appear as an ad in various cinemas in the U.S. and other countries.

The long version of “The Heist” ad is now available to view at Porsche NewsTV and the Porsche YouTube channel. 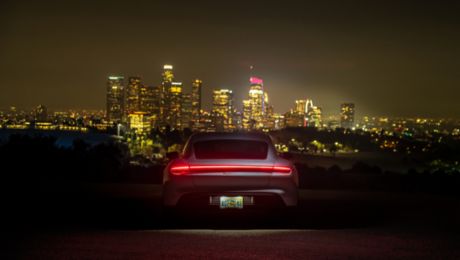