The 50th anniversary of the Porsche sportscar in 1998 was celebrated in several unique ways in Australia. One of them remains the unique Porsche 911 Carrera type 996 ‘Art Car’.

For a start, there was the five-day national night rally for all Porsche owners in Central Victoria, a unique ‘stop-the-trams’ parade of special Museum cars through the centre of Melbourne, followed by a record gathering of more than 911 Porsche owners and their cars in the Alexandria Gardens on the banks of the Yarra River.

However, the enduring Australian memento of the milestone event that today remains on display in the company’s world-famous Museum in Stuttgart, is the unique Porsche 911 Carrera type 996 ‘Art Car’ that was hand-painted in the Porsche Centre Melbourne showroom by Australian Aboriginal artist, Biggibilla.

The idea of turning automotive metal into art was not a new one for Porsche. The Type 917/20 built in 1972 as a test-bed for future Can-Am parts and aerodynamic ‘low-drag’ concepts, was controversially painted in pink for that year’s Le Mans 24 Hour race, with the names of cuts of meat written in German across it in a similar fashion to a butcher's carcass diagram. For obvious reasons, it was nick-named the ‘Pink Pig’.

It wasn’t one of Porsche’s record 19 Le Mans winners, but an identically-painted pink 911 RSR did take victory in 2018 in the GTE-Pro class for GT sportscars.

In Australia, Melbourne furniture maker, Warren Gainsmith, showed the judges from the German Embassy just what might happen when you leave a pristine Arena Red 1996 Porsche 911 Turbo alone with your two grandchildren, aged 16 months and 3 years old respectively — and a palette of paint! ‘PAS CAR’ (sic) was the result and fortunately the young artists, Bailey and Nikaela, confined their talent to just the driver’s door!

The project in the anniversary year by Aboriginal artist Biggibilla Doongalla was much more considered. Starting with a brand-new 996 generation Porsche 911 Carrera, his dreaming on the Porsche’s factory-baked enamel depicted the ‘Yuwaalaraay Songline from my Country’.

Today with the advents of vinyl full body wraps, turning a car into a canvas is much easier and faster. And if you don’t like the result, just peel it off and apply another wrap. But artists like Biggibilla would argue that the passion and the artistry are missing and the sense of occasion of creating a special memento for a very special anniversary, is arguably missing. 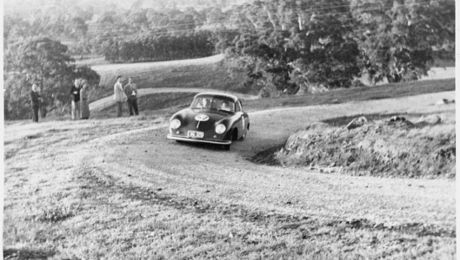