In order to deliver their children’s wish lists to Santa Claus in person, the two daddy bloggers Kai Bösel and Jan Hartmann take a Porsche Panamera Sport Turismo on a road trip to Drøbak in the far North – all the way to Santa’s home.

According to a Norwegian saga, up in the far North, in the village of Drøbak on the Oslo Fjord, there lives “Julenissen”, a Nordic version of Santa Claus. Accompanied by his little helpers, he brings presents to children on Christmas Eve. Anyone who wants to make sure that a wish list gets there in time for Christmas Eve is best advised to take it in person to Santa’s house, known there as Julehus, which is about 45 minutes’ drive from the outskirts of the Norwegian capital Oslo.

On the way to Vindfanger Bay

No sooner said than done. Kai Bösel of DADDYlicious, Germany’s biggest online magazine for fathers, and actor Jan Hartmann, who reports on his eventful life as a young father as “echt!Hartmann“, personally delivered their children’s lovingly designed wish lists to Santa’s post office shortly before Christmas.

The daddy bloggers’ route took them from Hamburg via the island of Fehmarn to Denmark, then on through Sweden, and all the way to Drøbak, Santa’s village in Norway.  In only 48 hours, patchwork dad Kai Bösel and German TV star Jan Hartmann together completed a road trip covering just under 1,000 kilometers. A long distance, wintry road conditions and quite a lot of luggage – their choice fell on the Panamera Sport Turismo as the optimum traveling companion.

In particular, the large tailgate, the low sill and the 4+1 seating concept make the Sport Turismo especially interesting for fathers. On top of that, this allrounder offers the typical Porsche combination of comfort and sportiness. It can comfortably seat up to five passengers with 520 litres of luggage. With the back seat rests folded down, the load bed provides storage space of up to 1,390 liters. The turbo version, with 404 kW (550 PS; combined fuel consumption 9.5 – 9.4 l/100 km; CO2 emissions 217 – 215 g/km), delivers the  desired drive. “This car is simply fun to drive. Loads of power under the hood, but with enough space for a pleasant weekend trip for the whole family – an awesome combination”, says Jan Hartmann.

Past Swedish elks and Scandinavian cities

On a route with breathtaking scenery and barren wintry landscapes, the two friends crossed the Oresund Bridge linking Denmark and Sweden. Passing the Scandinavian cities of Copenhagen, Malmö, Helsingborg, Fjällbacka and Göteborg, they continued their journey along the coast road on the Oslo Fjord. Their destination was the place where many years ago, according to legend, Julenissen was born under a stone in Vindfanger Bay and has lived there ever since in his little wooden cabin in Drøbak with his little helpers and reindeer.

Unlike his Nordic colleagues Joulupukki in Finland and Tomte in Sweden, Julenissen is more of a “Christmas gnome”, whose most important task consists of coordinating the many wish lists from children from all over the world and delivering the gifts on time. In fact, Drøbak is the place where all letters addressed to “Santa Claus, North Pole” are handled – translated into three languages and franked with a special Christmas stamp. The costs are borne by the Norwegian state.

In the fading light of dusk, the Porsche Panamera Sport Turismo passes through the village gates at the narrowest point of the Oslo Fjord, with its sensational view of the Norwegian Strait and a Christmas mood as well. After less than 48 hours on the road, Kai Bösel and Jan Hartmann have made it. They deliver their children’s wish lists to Julenissen right on time.

Kai Bösel was noticeably moved by the Christmas atmosphere: “It really is special for a father to be able to tell his daughter about visiting Santa’s house. When I called her from there and told her that I had just handed her wish list to Santa Claus in person, it was an unforgettable moment – for her and for me.” 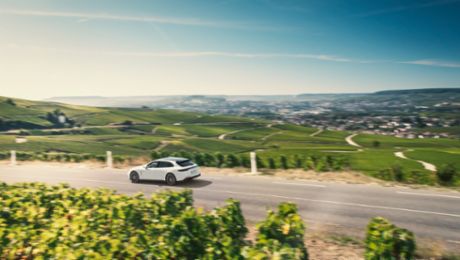 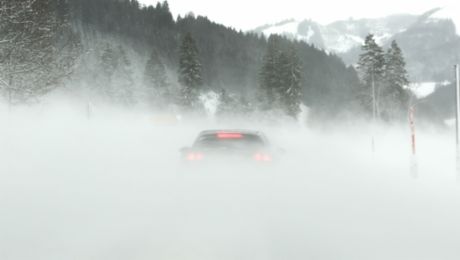 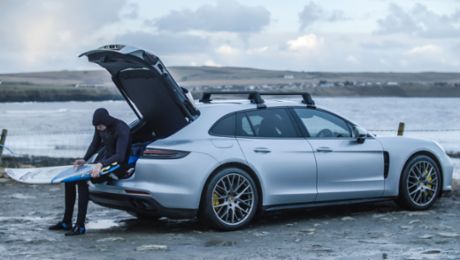 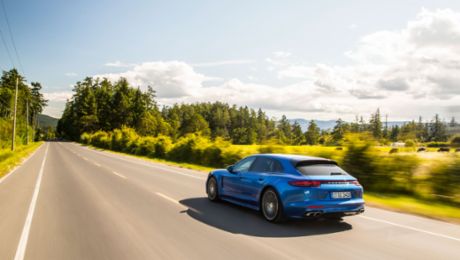 Into the wild: Porsche Panamera Models in Canada

Press representatives had the chance to drive both the Panamera Sport Turismo and the Panamera Turbo S E-Hybrid.

Fuel consumption/Emmissions*
Fuel consumption* combined 2.9 – 2.8 l/100km
CO2 emmissions* combined 66 – 64 g/km
Electric power consumptions* combined 16.2 – 16.1 kwh/100km
Porsche uses cookies to optimise and improve the website, as well as enable the availability of certain functions. By continuing to use this website, you agree to our use of cookies. For further information, please click  here