Two days before the Australian Open gets underway, Angelique Kerber has crowned her fabulous start to the season with a tournament win. On Saturday, the Porsche Brand Ambassador put on an excellent display to win the final of the WTA event in Sydney 6-4, 6-4 against the local hero Ashleigh Barty.

By winning the WTA event in Sydney, Angelique Kerber remains undefeated in 2018. Nine matches, nine victories – in compiling the impressive series, the 29-year-old German has put 2017, a year dominated by setbacks and self-doubt, firmly behind her. She now goes into Monday’s grand slam high on confidence. Her first opponent will be her Porsche Team Germany teammate Anna-Lena Friedsam.

The success in the Ken Rosewall Arena has returned Angelique Kerber to the illustrious circle of Top 20 players. She will be No. 16 in the new WTA rankings that will be published this coming Monday. In winning her eleventh career WTA title and
the first since claiming the US Open in September 2016, she gave herself the nicest present of all for her upcoming birthday on 18 January. “Winning this tournament is a dream,” said the former world No. 1 who was the runner-up at the tournament in the Australian metropolis back in 2014. “I’m so happy and proud to have won. The success makes my start to the new season perfect. I’ve put myself on the map ahead of the Australian Open.”

The winner of the Porsche Tennis Grand Prix in both 2015 and 2016 has, in Australia, regained the fighting spirit that took her 2016 to two grand slam wins, a silver medal at the Olympic Games in Rio and the Wimbledon final, in time for the first highlight of the season. One week ago, she and her team partner Alexander Zverev were runners-up at the Hopman Cup in Perth. In Sydney, where she beat the American Venus Williams in the second round, she overcame the strong-serving Ashleigh Barty with her consistent and powerful game. Two breaks (with the score at 2-2 in the first set and 3-3 in the second) laid the foundations for the victory which she clinched with her first match point after one hour 11 minutes. She is the first German to win the tournament.

The last time she stood in a WTA final was in Monterrey/Mexico in April 2017.
Angelique Kerber is not the only Porsche Team Germany player to be in top form in the lead-up to the Australian Open. One week ago, Julia Görges, who has been a Porsche Brand Ambassador since 1 January, claimed the WTA tournament in
Auckland, New Zealand. She will start her Australian Open campaign against the
American Sofia Kenin. 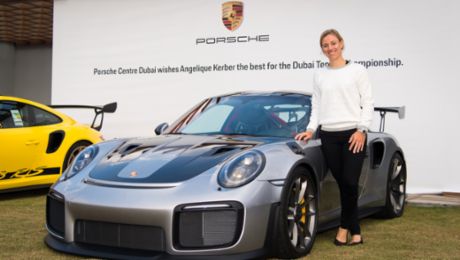