Some of the most iconic photographs of Porsche cars have been of a 356 up a snowy Alp, with skis strapped to the roof. Sixty years on, the 911 Turbo S wanted some of the limelight.

There is something so very right about the image of a Porsche with skis on the roof. Even in the earliest years of the company, people strapped their wooden skis to their 356 or 911 and headed up into the Alps. Cameras captured these moments for posterity – pictures that have almost come to symbolise the jet-set years of the 1950s and ‘60s.

It was this that was at the forefront of fasion photographer Marcus Hoffmann’s mind when he planned a ski-wear shoot in the Swiss Alps. An image from the Porsche Museum’s archive that had appeared on the Porsche Drivetribe feed had caught his eye, and he wanted to see if he could re-capture its glamour today with a 911 Turbo S.

The Turbo S: a distance-devouring crosser of countries

The trip down to Switzerland started somewhat less glamorously in the reality of a Stuttgart rush hour, but the 911 was comfortably up to the task. The traffic crawled along and the Turbo S crawled along with it, no less tractable nor trickier to place than the family hatchbacks surrounding it. Heated seats and steering wheel kept its occupants warm. Apple CarPlay kept them entertained. And then the traffic cleared. The Turbo S effortlessly transformed itself into a distance-devouring crosser of countries. Even though it was shod in speed-limited winter tyres, it made safe and rapid progress down ever-quieter autobahns.

Oblivious to the occasional vehicle abandoned at the side of the road, the Turbo S’s computers and differentials shuffled traction and steering inputs between all four wheels, slip being dealt with before it even developed. And the Crayon-coloured sportscar had reinvented itself yet again, this time into a faithful friend in truly nasty winter conditions.

The perfect day to get to work

The following morning dawned bright and sunny on the stunning mountain scenery – the perfect day for Marcus and model Giulia Carla Beskid to get to work. The oiled bamboo surface of the skis looked for all the world like a carving version of the wooden skis of old while the Turbo S turned heads as it drove across the piste and, at one point, backed up the reverse of a ski jump in front of a restaurant full of surprised holidaymakers.

With dozens of outfits captured, and hundreds of shots in the bag, the final task was to try to recreate the image from the archive. Sixty years on, a Porsche with skis on the roof still looks so very right. 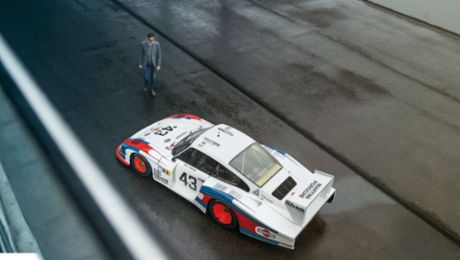 Rendezvous in the Rain: Walliser and the Whale

An interview at the Hockenheimring with Frank-Steffen Walliser, head of the 911 and 718 model lines.

The new model is accompanied by an innovative and interactive online campaign.

Fuel consumption/Emissions*
Fuel consumption* combined 11.3 l/100km
CO2 emissions* combined 257 g/km
Porsche uses cookies to optimise and improve the website, as well as enable the availability of certain functions. By continuing to use this website, you agree to our use of cookies. For further information, please click  here