Songs of the Road

Melody roads in challenging mountainous regions of Japan make it fun to observe the speed limit. And they sound good. The focus here is more on engaging drivers in a playful manner, rather than on imposing penalties.

A gentle rain falls on the winding roads of the hilly region about three hours north of Tokyo. It’s shortly before tedium. Forty kilometers an hour. Exactly. But then the tires start to sing. The melody road near the town of Nakanojō in Gunma prefecture rewards drivers with a song for adhering to the speed limit. “Itsumo Nando Demo” means something like “again and again, no matter how often.” Japan is building more and more of these musical roads—it currently has thirty-three of them. Gunma alone has ten stretches whose good vibrations encourage responsible driving. The lateral grooves cut into these roads generate rumbling sounds when cars drive over them, at different pitches depending on the length of the intervals.

The song of the road can best be heard with the windows closed. And, of course, nearly every native of Japan knows “Itsumo Nando Demo”—the closing song in Spirited Away, the famous animated film by Japan’s masterful director Hayao Miyazaki. The pleasure lasts a mere thirty seconds, with the windshield wipers beating time in the impromptu role of conductor. Just long enough to hum along and indulge in childhood memories—or to grimace if it seems like a low-speed drill at the dentist’s. That’s how some people describe it. Others apparently don’t notice anything at all.

The more familiar the tune, the better.

Japan has a tradition of encouraging lawful behavior in playful ways. Melody roads harmonize well with this culture. Why not enjoy doing what you have to do anyway? If you exceed the speed limit, it sounds awful. That’s the reasoning behind the Japanese approach: the more familiar the tune, the better. In actual practice the compositions can be ambitious, such as the one in the town of Akitakata that places the rhythm line under the right tire and the melody under the left.

Despite the fascination that melody roads exert on drivers, the inhabitants of Kita-Karuizawa in Gunma prefecture complained of losing sleep in July of 2012. Tourists were thrilled with the musical rumble road, but the locals grumbled—with good reason, as it turned out. Measurements showed that the sound carried for five hundred meters. One year later a layer of asphalt stifled the annoyance. It was a rare failure for the Gunma traffic authorities. No statistics have been compiled on this musical means of calming traffic or on the possibility of lower accident rates. But the general consensus is that melody roads serve the welfare of tourists and locals alike, and that more might well be built.

Civil engineer Shizuo Shinoda, born in 1953, came up with the idea of using road surfaces for music education in 2004. He had observed major damage to the roads around Nakashibetsu, his hometown on the northern island of Hokkaido, caused by heavy tractors. Shinoda noticed that the damaged surfaces produced interesting sequences of sound. Together with the Hokkaido Industrial Research Institute (HIRI), which was designing an infrared system at the time to warn drivers of surface water and against nodding off at the wheel, he introduced the first melody road in 2007 by installing lateral grooves on Highway 272 between Kushiro and Shibetsu. Driving on this 175-meter stretch at a speed of 40 kmh producess the pop song “Shiretoko Ryojo.”

The sound is the clearest on straight stretches

In the meantime, Ishikawa prefecture has a melody road of 1.2 kilometers that can be heard at a speed of 70 kmh. The sound is the clearest on straight stretches. Planners generally install lengths of 250 to 320 meters that work at a speed of 40 kmh. At costs of up to two hundred thousand euros, it’s not cheap to compose songs on asphalt. And their selection tends to be conservative. Regional decision makers generally opt for ballads about beautiful scenery.

For example, the Fuji-Subaru Line that leads up to Mount Fuji, the greatest of the country’s volcanoes, sings of its sublime features. And drivers near the town of Kusatsu, around forty kilometers from Nakanojō, enjoy a song extolling the hard but graceful paddling done by female water stirrers at nearby thermal springs.

The road to the observatory in the city of Takayama in Gunma prefecture produces “When You Wish upon a Star,” the theme song from the movie Pinocchio. This song is probably familiar to as many people as the refrain of John Denver’s “Take Me Home, Country Roads,” which is heard in Fukushima prefecture. Western classical music has met with less success. Some years ago, Gioachino Rossini’s Wilhelm Tell Overture proved a short-lived experiment—no one recognized it.

China chiseled its national anthem into a road

Two Danish artists created the Asphaltophone, believed to be the very first musical road, back in 1995. But it was the Japanese who developed it for traffic pedagogical purposes. HIRI in Hokkaido was granted a patent for its melody road technology in 2011. Hardly any other country has shown a similar fondness for this type of musical gimmickry. The People’s Republic of China chiseled its national anthem into a road in Henan province in 2013. Not wanting to be outdone, the Americans incorporated “America the Beautiful” into a highway in New Mexico in 2014.

It was no coincidence that Japan’s first attempt to have voice commands instead of songs failed. “Curve warning—please slow down” (“Curve desu. Speedo o otoshite kudasai.”) buzzed a grooved stretch of road in Hokkaido. And “Intersection approaching—please come to a stop” was heard nearby. The asphalt cop under the tires was not well received. Too overbearing. Not melodious enough.

Works driver Simona De Silvestro: at home on the road

The fastest woman at Porsche Motorsport finds tranquility on a camping trip in her Cayenne Turbo Coupé. 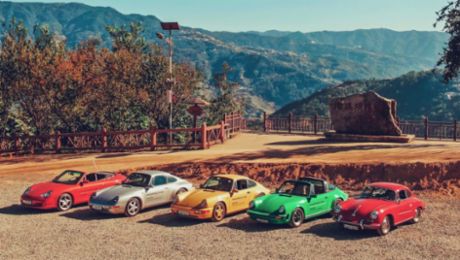 The Porsche Museum had sent a fleet of historical cars on a fascinating journey to southwestern China.