The history of Porsche Endurance Racing is one of the most exciting and successful and probably unparalleled by any. During the decades, legends like 917, 956, 911 GT1 collected victories on racetracks around the world. Among those, surely, the 24-hours of Le Mans is the absolute pinnacle. No other brand managed to collect as many overall victories as Porsche in this race.

In 2012, the return of the Porsche Factory Team to the top LMP1 class was officially announced. This is how the Porsche 919 Hybrid was born. In 2014 was the first season, when the 919 took part in the FIA World Endurance Championship racing series and Porsche managed to achieve the overall 3rd place in its first season.

Even if the season 2017 was the last one for the 919 Hybrid, the so-called 919 Tribute tour was planned for the year 2018 — as a farewell to the legend. For this purpose, the 919 Hybrid was freed from the limitations given by the regulations of the WEC racing series. This led to the 919 Hybrid Evo with even more engine power, more aerodynamic performance, etc

New design and new devices for the best aero performance

In terms of aero performance, the objectives were quite clear: to achieve enough downforce in the slower turns as well as not too much drag (and downforce) on the fast straights, adaptive aerodynamic devices had to be developed. Therefore, both the front as well as the rear wing of the car used the so-called drag reduction system (DRS).

In case of the rear wing this means that a completely new 2-segment wing had to be designed with opening and closing flap. Finding an optimal airfoil shape for that is not a trivial task. The objectives for such wing need to consider the best possible efficiency in the high-downforce setting as well as low drag in the high-speed setting. Moreover, such wing still needs to be capable to operate robustly in wider range of angles of attack, under varying weather conditions, etc.

For the seventh episode of the Porsche Top 5 series, we visit the epicentre of Porsche Motorsport: Flacht near Weissach, where Steven Mitas, Technical Manager of the 919 Hybrid Project, and record-breaking drivers, Timo Bernhard and Neel Jani, explain the highlights of the 919 Hybrid Evo.

This is when we decided to use some of the machine learning algorithms to help us first with the choice of the correct design parameters. Similar like in picture processing, one can use the database of available airfoils (in our case about ~1600 airfoils, m-selig.ae.illinois.edu) and train the machine learning models with these (so-called dimensionality reduction). After this analysis, it turns out, that something like an “airfoil DNA” can be extracted from all the data and that each of possible airfoils can be described only by a relatively small number of “airfoil genes” (only 5 to 10 depending on desired precision). Therefore, if an engineer is looking for an optimal airfoil, it is enough only just to vary these few “airfoil genes”.

Once we could describe any possible airfoil with only just a few design parameters, the question was, how to find the best one. That is a typical optimization problem. Just to illustrate the complexity — if we describe each of the 2 airfoils with 5 design parameters, and if we also consider the relative position of the 2 wing segments and their size ratio as an optimization criterium, then together with the unknown flap angle in the opened position, we end up with altogether 15 design parameters. If we vary these design parameters only in e.g. 5 steps, calculate all the combinations and select the best one, we would need to analyze ~30 billion — each under multiple operating conditions. That is clearly not a feasible solution and still the resolution of only 5 steps per design parameter is extremely coarse.

“We used the algorithms, that mimic the evolution process of the organisms in the nature and lead to the “fittest” one."

Therefore, also at this stage, optimization algorithms have to be used. Here again, we used the algorithms, that mimic the evolution process of the organisms in the nature and lead to the “fittest” one. Thanks to this, the optimum could be found only by analyzing hundreds to a few thousands of designs.

The hundreds to thousands are already a relatively reasonable range, which can be simulated with the computational fluid dynamics (CFD) tools and with the use of high performance computing (HPC) resources available. Therefore, with the use of Machine learning for the airfoil description, Genetic algorithms for the optimization and computational fluid dynamic for the simulation on a HPC cluster, the optimal shape of the rear wing for the 919 Evo was found. Using conventional methods, billions of different shapes would have to be analyzed and even the best of these billions still would not reach the quality of the one, which was obtained by our implemented method.

In case of the 919 Evo, the best design obtained from the optimization was only tested as the single one wing geometry in the wind tunnel to confirm the results from the simulations. Therefore, one could say: our wing made the way from our optimization process directly to the race track.

In 2018, the Porsche 919 Hybrid Evo went to some of the most famous classic racetracks around the world and managed to achieve astonishing records: 1:41.770min in Spa, being faster than the that-time F1 fastest lap and the all-time-record on the Nurburgring Nordschleife of 5:19.55 min, being almost a minute faster than the 35 years old record of Stefan Bellof. All this once again confirmed the 919 to be a unique car and a true follower of the 917, 956, 911 GT1 and other legendary cars.

Iron Man, Holograms and a Hackathon at MIT

René Müller, Head of Development for Head Up Display Technology at Porsche, explains how he and his colleagues d(r)iving into virtual realities. 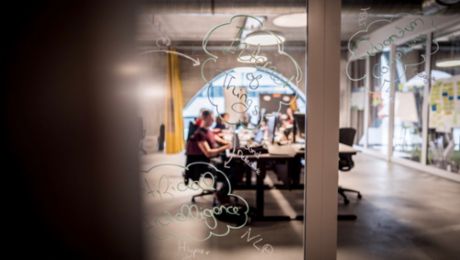 Why 2019 will be the Year of Artificial Intelligence in Germany

Anja Hendel, Director of Porsche Digital Lab Berlin, gives a very personal outlook on the trends for the next 12 months.