An overview of the net assets, financial position and results of operations of the Porsche AG Group from January 1 to December 31, 2019.

Non-current assets increased by € 2,699 million to € 29,707 million. The increase relates mainly to fixed assets and to deferred tax assets. Non-current assets expressed as a percentage of total assets amounted to 70 per cent (prior year: 71 per cent).

At the end of the reporting period, the fixed assets of the Porsche AG Group – i.e. the intangible assets, property, plant and equipment, leased assets, equity-accounted investments and other financial assets – amounted to € 17,982 million, compared with € 16,099 million in the previous fiscal year. Of this increase, a substantial amount (€ 902 million) is attributable to right-of-use assets that must be recognized for the first time on initial application of new accounting standard IFRS 16 – Leases. The effect of transitioning to IFRS 16 amounted to € 831 million.

Fixed assets expressed as a percentage of total assets amounted to 42 per cent (prior year: 42 per cent). Intangible assets increased from € 4,929 million to € 5,085 million. The increase mainly resulted from additions to acquired licenses and advance payments made. Property, plant and equipment increased by € 1,696 million year-on-year to € 8,624 million, which was due primarily to additions and reclassifications relating to advance payments made and assets under construction and to buildings and land, right-of-use assets relating to buildings and land due to the initial application of IFRS 16, technical equipment and machinery, and other equipment, furniture and fixtures. The additions not relating to IFRS 16 consist mainly of production systems, tools and construction work for the new generations of vehicles. By contrast, the launch of production for the new Taycan series caused a decline in advance payments made and assets under construction due to the reclassification as property, plant and equipment subject to wear and tear. Leased assets increased by € 53 million in comparison with the prior year, to € 3,829 million. This item contains vehicles leased to customers under operating leases.

Non-current other financial assets decreased by € 48 million to € 8,350 million. The decrease was due to the marking-to-market of derivative financial instruments.

Deferred income tax assets amounted to € 1,355 million as against € 730 million in the prior year.

As a percentage of total assets, current assets amounted to 30 per cent compared with 29 per cent in the prior year. Inventories increased from € 3,889 million in the prior year to € 4,013 million at the end of the reporting period.

Current other financial assets increased by € 123 million to € 2,415 million. The increase mainly relates to the clearing account with Porsche Holding Stuttgart GmbH and receivables from loans to VW Group companies in the amount of € 261 million. By contrast, the marking-to-market of derivative financial instruments resulted in a decrease of € 148 million.

The equity of the Porsche AG Group increased by € 951 million to € 17,428 million compared with the prior-year reporting date. The profit ­after tax, profit transfer and dividends of € 999 million together with currency translation ­differences of € 92 million and a capital contribution by Porsche Holding Stuttgart GmbH amounting to € 1,273 million generated ­increases in equity.

By contrast, the € 866 million remeasurement from pension plans net of tax, the € 528 million change after tax in the hedge reserve, and the € 19 million acquisition of non-controlling interests generated decreases in equity.

Provisions for pensions and similar obligations increased by € 1,646 million. This was due primarily to actuarial adjustments of present values amounting to € 1,230 million. There was also a significant rise in the number of eligible employees.

Non-current other financial liabilities recorded growth of € 258 million. This increase relates mainly to the market-to-market of derivative financial instruments.

Deferred income tax liabilities amounted to € 681 million compared with € 650 million in the prior year.

Current liabilities decreased from € 12,017 million to € 11,299 million, while expressed as a percentage of total capital they decreased from 31 per cent to 27 per cent as of the end of the past fiscal year.

Non-current and current financial liabilities rose from € 5,859 million to € 7,614 million. The primary reasons for the increase were twofold. Firstly, a € 1,000 million bond was placed in August 2019. The tranches maturing were refinanced by means of existing bonds in the amount of € 339 million. Secondly, it was necessary to recognize € 910 million in lease liabilities in connection with the right-of-use assets recognized in property, plant and equipment due to the initial application of IFRS 16. There was also growth in refinancing the financial services business in the form of asset-backed securities and bank loans.

Trade payables decreased to € 2,582 million from € 3,134 million in the previous year due to payment processing in line with standard business practice.

Current other financial liabilities amounted to € 3,082 million (prior year: € 3,441 million). The decline primarily relates to the € 492 million decrease in the liability for transferring profit after taxes to Porsche Holding Stuttgart GmbH. This was offset by a € 138 million increase in the market-to-market of derivative financial instruments.

1) The prior year figures were restated.

Cash flows from operating activities amounted to € 4,486 million in the 2019 reporting period following € 3,845 million in the prior year. The material effects resulted from higher depreciation, amortization and write-downs, lower outflows for inventories and a decrease in profit before tax.

The Porsche AG Group’s profit after tax decreased by € 317 million from € 3,118 million in the corresponding prior-year period to € 2,801 million in the current fiscal year. The tax rate in the reporting period was 31 per cent (prior year: 32 per cent).

Consolidated revenue at the Porsche AG Group amounted to € 28,518 million in the reporting period (prior year: € 25,784 million). The Porsche AG group sold 268,363 new vehicles in the past fiscal year. This corresponds to an increase in unit sales of 10 per cent compared with the prior year. The primary contribution to the growth in sales volume and revenue was made by the Cayenne model line, which recorded an increase of 22,318 to 92,464 new vehicles. The Macan remains the bestselling model line, with 94,388 new vehicles sold – up 12,144 on the prior-year figure. In regional terms, China remained the largest market, with new vehicle sales totalling 87,644 units. Unit sales grew by 10 per cent there in the fiscal year. In addition, the European market (excluding Germany) recorded particularly strong growth this year, with unit sales of 58,505. This corresponds to 24 per cent growth in unit sales. In Germany, unit sales increased by 23 per cent to 22,878 new vehicles.

The cost of sales increased in line with revenue to € 21,256 million (prior year: € 18,629 million), which represents 75 per cent of sales revenue (prior year: 72 per cent). In absolute terms, the cost of sales rose by € 2,627 million or 14 per cent. This slightly disproportionate increase is due on the one hand to higher research and development costs recognized in the income statement. The capitalization ratio for research and development costs amounted to 44 per cent (prior year: 49 per cent). On the other hand, mix and volume improvements were partly offset by negative currency effects and cost increases. This caused the gross margin to decrease from 28 per cent to 25 per cent.

Distribution expenses rose from € 1,901 million to € 2,044 million due to the higher unit sales. Administrative expenses also declined, from € 1,103 million to € 1,029 million. In relation to sales revenue, distribution expenses remained level at 7 per cent (prior year: 7 per cent), while administrative expenses decreased slightly to 3 per cent (prior year: 4 per cent).

The personnel expenses across all functions of the Porsche AG Group increased from € 3,613 million to € 4,003 million. The growth in personnel expenses is primarily due to the rise in the average number of employees during the year by 2,919 to 34,010.

Depreciation, amortization and impairment across the functions increased to € 3,044 million compared with € 2,567 million in the prior year. This primarily relates to the depreciation, amortization and impairment of capitalized development costs and property, plant and equipment. Depreciation of the right-of-use assets recognized in accordance with IFRS 16 was included for the first time in the fiscal year. This amounted to € 96 million.

Other operating income rose from € 813 million to € 846 million. The increase was due primarily to income from instruments used in currency hedges. Other operating expenses declined from € 675 million to € 628 million before special items. Not adjusted for special items, they increased to € 1,173 million. The special items for the diesel issue relate to the € 535 million fine imposed in the administrative offense proceedings instigated by the public prosecutor’s office in Stuttgart.

Results of operations of the Porsche AG Group 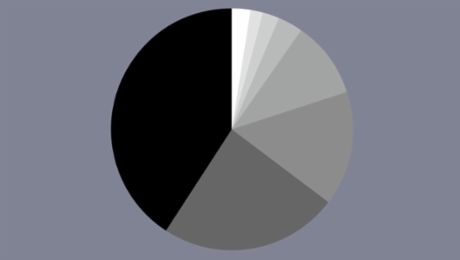 The financial position, the income statement, the comprehensive income and the cash flows of the Porsche AG Group at a glance. 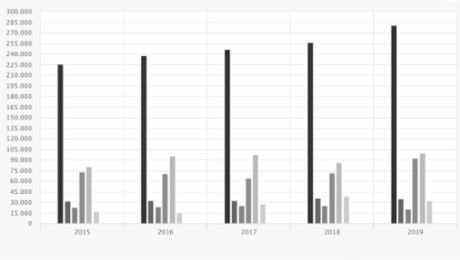 Interactive Charting for individual comparisons of the years 2015 to 2019. 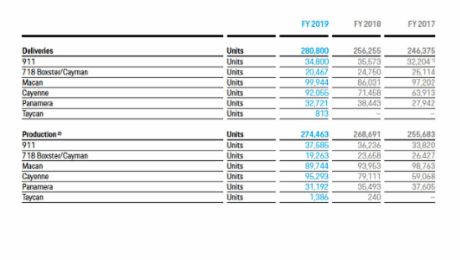 A brief overview of the deliveries, production figures, employees and finances of the Porsche AG Group.

The business performance of the Porsche AG Group in 2019.