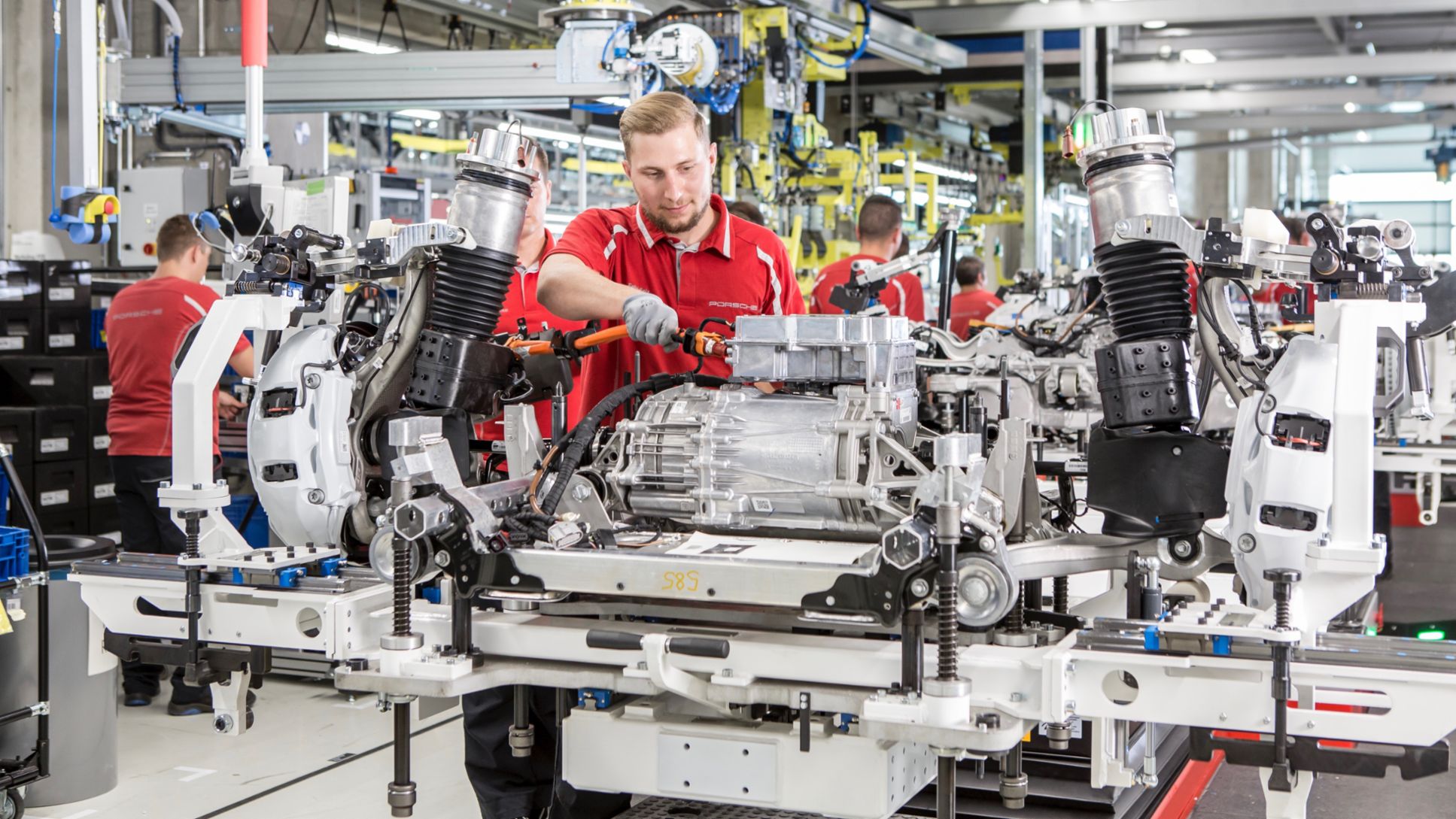 In the 2019 financial year, Porsche produced a total of 274,463 vehicles, representing an increase of roughly three per cent over the previous year.

The company’s main plant in Zuffenhausen produced around 250 cars every day – more than ever before. A sophisticated control and production principle enables the assembly of all two-door sports cars – including the 911, 718 Boxster and 718 Cayman model series – on a single production line. This highly flexible system ensures that many individual customer requests can be realised within the scope of series production.

The core challenge in the reporting year was the commissioning of the new factory for the Taycan during regular production.

This was opened as scheduled on 9 September 2019, which meant that fewer than 48 months separated the presentation of the Mission E concept car in September 2015, the world premiere of the Taycan production model in early September 2019 and the start of series production a few days afterwards.

A factory of the future

Zuffenhausen represents the brand’s heart and soul, with the new factory located there acknowledging Porsche’s history while clearly pointing to the future. Over 700 million of the six billion euros that Porsche is set to invest in electromobility by 2022 have been dedicated to the construction of the new production facilities. If the body shop that entered into service with the launch of the eighth-generation 911 is also included, this figure rose to around one billion euros.

The Taycan is being assembled in a factory of the future – flexible, networked and with pioneering production technology. The company describes this as Porsche Production 4.0, featuring the comprehensive and interlinked implementation of smart, lean and green aspects through modern production methods. In addition to transparency and networking (smart), Porsche Production 4.0 is characterised by its responsible and efficient use of resources (lean) as well as by eco­logical factors (green). People remain at the heart of production, with modern technology lightening their load and supporting them in their work.

This building project comprised a number of large individual projects: a new body shop, a new paint shop, a factory extension for the production of electric motors and components, a new car assembly area and the approximately 900-metre-long conveyor technology that connects the paint shop to the final assembly. The new buildings feature a gross floor area of 170,000 square metres, making this the largest construction project since the Zuffenhausen plant was first established.

The rigid yet lightweight material-mix bodies with 100 per cent aluminium exterior are produced in the 30-metre-tall body shop. From there, they are delivered to the paint shop, for which the company took an exemplary approach to environmental protection and energy efficiency when planning the building. For example, the body driers are heated via direct heating in the individual process steps, and the exhaust air from the driers is cleaned together with the exhaust air from the paint booths.

The top floor houses automated process areas such as the immersion baths for cathodic dip coating and the paint booths. Manual workstations are located on the ground floor, and the accessible layout promotes communication and interaction among colleagues.

Instead of a traditional fixed production line, the assembly process for the Taycan features a flexi-line with driverless transport systems that move independently from station to station. As specific driverless transport systems can be flexibly removed from and returned to the production line, this delivers numerous benefits such as easier implementation of individual customer requests. Boasting 62,000 square metres of production, logistics, testing and employee recreation areas spread across four storeys, the building complex in Zuffenhausen measures 38 metres from foundations to roof.

The new electric motor and component production areas, which house Porsche’s first-ever series production of electric drives, are located in the immediate vicinity of the traditional engine factory where all of the Volkswagen Group’s V8 combustion engines are manufactured. This new facility handles the production of the electric motors plus the assembly of the gearbox and axles: these combine to form the drive units for the all-electric four-door all-wheel-drive sports car. The building also features efficient logistics with modern storage technology. Driverless transport systems are additionally used for automated material provision.

This factory within a factory was constructed in the middle of a city, within a very small area and at a blistering pace. One of the key logistical feats involved coordinating the construction site traffic so as not to impede the ongoing production of the two-door sports cars. Another decisive factor behind the smooth implementation of the project was the intensive open dialogue with authorities and neighbours, who were kept informed at all times throughout the entire project.

Porsche’s Leipzig factory continues to record positive growth, and in 2019 the company set an important course for the future of this site in Saxony and the production of new models. Over 600 million euros are being invested in the ongoing expansion of this facility, with the foundation stone for a new body shop boasting a total area of 75,500 square metres having been laid on 12 March 2019. This new factory extension gave Porsche the opportunity to produce all-electric cars on the existing production line alongside petrol and hybrid models, starting with the next generation of the Macan. As a fully electric car based on Premium Platform Electric (PPE) architecture, the new Macan is set to be produced in Leipzig from the early 2020s.

In April 2019, Porsche Leipzig GmbH decided in favour of integrated axle assembly at its facility in Saxony for the production of the upcoming all-electric Macan. The factory had previously outsourced this work to a system supplier that continues to assist with the current Panamera and Macan models. The in-house manufacturing of axles for electric cars will make on-site production even more flexible and efficient. On top of this, Porsche Leipzig will also create over 100 high-skilled jobs.

Steps towards the Zero Impact Factory

Porsche’s factory of the future concept contains a variety of measures at all sites for achieving the goal of the zero-impact factory – namely, production without any negative impact on the environment. The new production facilities at the Zuffenhausen plant represent a particularly decisive step in this direction, hosting the carbon-neutral production of the Taycan and helping Porsche set new standards in terms of ecological sustainability. For example, Porsche has reduced CO2 emissions at the production sites by 75 per cent per car produced since 2014. Additionally, the sports car manufacturer lowered the energy and water consumption in its facilities by 20 per cent per car produced. It also slashed its use of solvents by a third during this period. In addition, the increasing use of electric logistics vehicles and rail transport powered by green electricity helps reduce CO2 emissions in logistics.

Porsche has signed up to the climate goals agreed in Paris in December 2015 and takes responsibility for reducing environmentally harmful emissions. As its aims extend far beyond mere decarbonisation, the vision of the zero-impact factory includes 12 action areas: environmental management and organisation, technology and processes, perception of the factory, efficient water use, planning, energy efficiency and climate protection, resource and material efficiency, pollutants, soil, logistics, biodiversity and operational disruptions.

Since 2017, the company has exclusively used electricity from renewable energy sources. The new factory for the Taycan in Zuffenhausen also used certified biogas as an energy source for heat and power. The highly efficient combined heat and power (CHP) plants next to the production and office buildings provide heat and a portion of the electrical energy used, thereby expanding the environmentally friendly energy mix at the site.

They boast an overall efficiency of more than 83 per cent and are most effective when operated in the vicinity of a constant heat demand such as at a paint shop, where the immersion baths and drying areas require a continuous supply of process heat. Around 90 per cent of the generated heat is intended for supplying heat and hot water to the production and office buildings. These new CHP plants are operated exclusively using certified biogas drawn from organic waste and residue. In the future, Porsche will also use biogas generated from the city of Stuttgart's waste.

The new energy-efficient buildings go far beyond the minimum statutory requirements, requiring 15 per cent less energy on average than the previous construction standard. The use of waste heat in the paint shop also helps save even more energy.

Porsche has hugely expanded the scope of several sustainability requirements issued by the city of Stuttgart. For example, the material from the demolished former halls was immediately processed on-site and reused for the new buildings.

As the new factory is located at the northern edge of Stuttgart’s dense city centre, the building height is limited to 38 metres in order to ensure that fresh air from the north can still reach the heart of the city. The construction trench therefore extended 25 metres underground, with 240,000 cubic metres of earth being moved to make way for the multistorey assembly building.

The green roofs on all the new buildings cover some 42,000 square metres, ensuring a lower degree of sealing than at the former industrial facility. Measuring 900 metres, the longest green roof is located on top of the new transport bridge that connects the paint shop in the west to the assembly building in the east.

Back in 2017, the German Sustainable Building Council (DGNB) bestowed its platinum certificate – the highest possible – on the new engine plant in Zuffenhausen. This prestigious honour, which is reserved for particularly sustainable industrial sites, was subsequently granted to the 427-hectare Leipzig factory in 2019. The evaluation process featured 167 criteria in 28 categories: in addition to envir­onmental protection, biodiversity and energy life cycle assessments, the DGNB also considered the handling of resources, the design of the site, the impact on urban climate and infrastructure, ecological construction monitoring, life cycle costs and value stability, and the corresponding planning and processes. The DGNB was particularly impressed by aspects such as the energy management life cycle assessment and the site’s capacity for change. 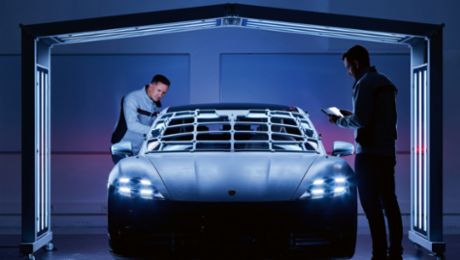 Research and development at Porsche combines tradition and new technologies. 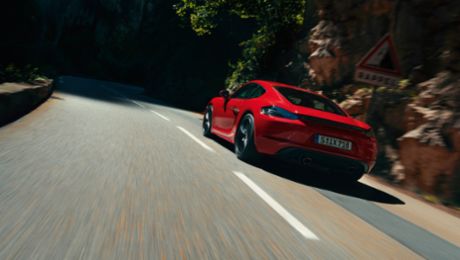 Customer satisfaction is an integral part of the Porsche Strategy 2025 Plus. 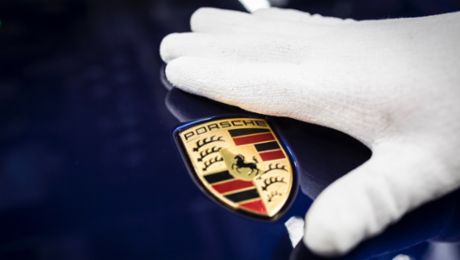 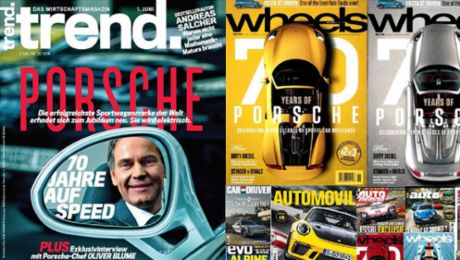 The outstanding reputation is an important factor of success for Porsche.

Fuel consumption / Emissions
Fuel consumption combined 10.1 - 9.7 l/100 km
CO2 emissions combined 231 - 222 g/km
Porsche uses cookies to optimise and improve the website, as well as enable the availability of certain functions. By continuing to use this website, you agree to our use of cookies. For further information, please click  here