At the Leipzig production location, a total of 129,446 vehicles of the Macan (93,953) and Panamera (35,493 units) model ranges were built. Added to this were 79,111 units of the third generation of the Cayenne. The model is produced at the Bratislava site (Slovakia). In ­addition, the first pre-series Taycan rolled off the production line (240 units) in Zuffenhausen.

The 911 remains the heart of the product ­line-up and plays a significant part in making Porsche one of the most profitable carmakers in the world. The venerable main plant in Stuttgart-Zuffenhausen is another key component in the company’s success. With 250 units rolling off the line each day, the plant is producing more vehicles than ever before. A clever control and production principle allows the ­assembly of all two-door sports cars – the 911, 718 Boxster and 718 Cayman – on one production line. Thanks to the highly flexible production system, many customer customization wishes can be fulfilled at Zuffenhausen as part of the series production process.

In the reporting year, one particular challenge was not simply to build the numerous model variants of the 718 and 911 model lines, but also to ramp up production of the eighth ­generation of the 911 as well. As a result, the still-available variants of the predecessor ­generation – such as the 911 Turbo and the 911 GT models – were being assembled in parallel with the new 911 models of type 992.

Investment in the future: Taycan production facility
In addition to the traditional two-door sports car models, the main plant is abuzz with the transition to the era of e-mobility. In the ­reporting year, preparations for the production start of the first all-electric drive sports car from Porsche were proceeding full steam ahead. The new production facilities for the Taycan at the main plant are being erected during ongoing operations.

The shift toward e-mobility is associated with total investments to the tune of six billion ­euros through 2022. Of that, some 700 million euros will go exclusively to the construction of the Taycan production facilities in Zuffenhausen. And it is not just the main plant’s existing ­bodyshop that will be expanded. There will also be a new paint shop, an electric motor and component production facility and a new ­assembly plant.

Under the heading Porsche Production 4.0, the company is establishing a networked, transparent and modern production apparatus. One of the many innovations being introduced with the production start of the new electric Porsche is the Flexi-Line, in which the vehicles are guided through the production process by driverless automated guided vehicle (AGV) systems. The systems operate without the hall’s double floor, which the traditional ­assembly line, with its sliding plates, requires. With the Flexi-Line, Porsche combines the ­advantages of the classic assembly line principle with the advantages of flexible assembly. This makes it possible not only to set up the buildings much more variably than previously, but also the production steps. That benefits the ergonomics of the work stations as well as the quality of the product and profitability. Porsche is the first carmaker to employ this groundbreaking production technology.

Porsche is hiring 1,200 new employees for production of the Taycan. They have to be ­acquired, qualified and integrated into the workforce. A further 300 employees will be added with the start of production of the ­Mission E-based model, the Cross Turismo.

Engine construction, chassis production, ­saddlery
For the V8 combustion engines used in the Panamera and Cayenne model ranges, ­Porsche has established an engine production facility in Zuffenhausen. The production facility for the electric motors for the Taycan is ­located in the immediate vicinity. Chassis ­production and the in-house saddlery also moved into new spaces in the reporting year: modern methods of material analysis and ­efficient processing enable Porsche to work responsibly with leather and better accom­modate individual customer wishes. 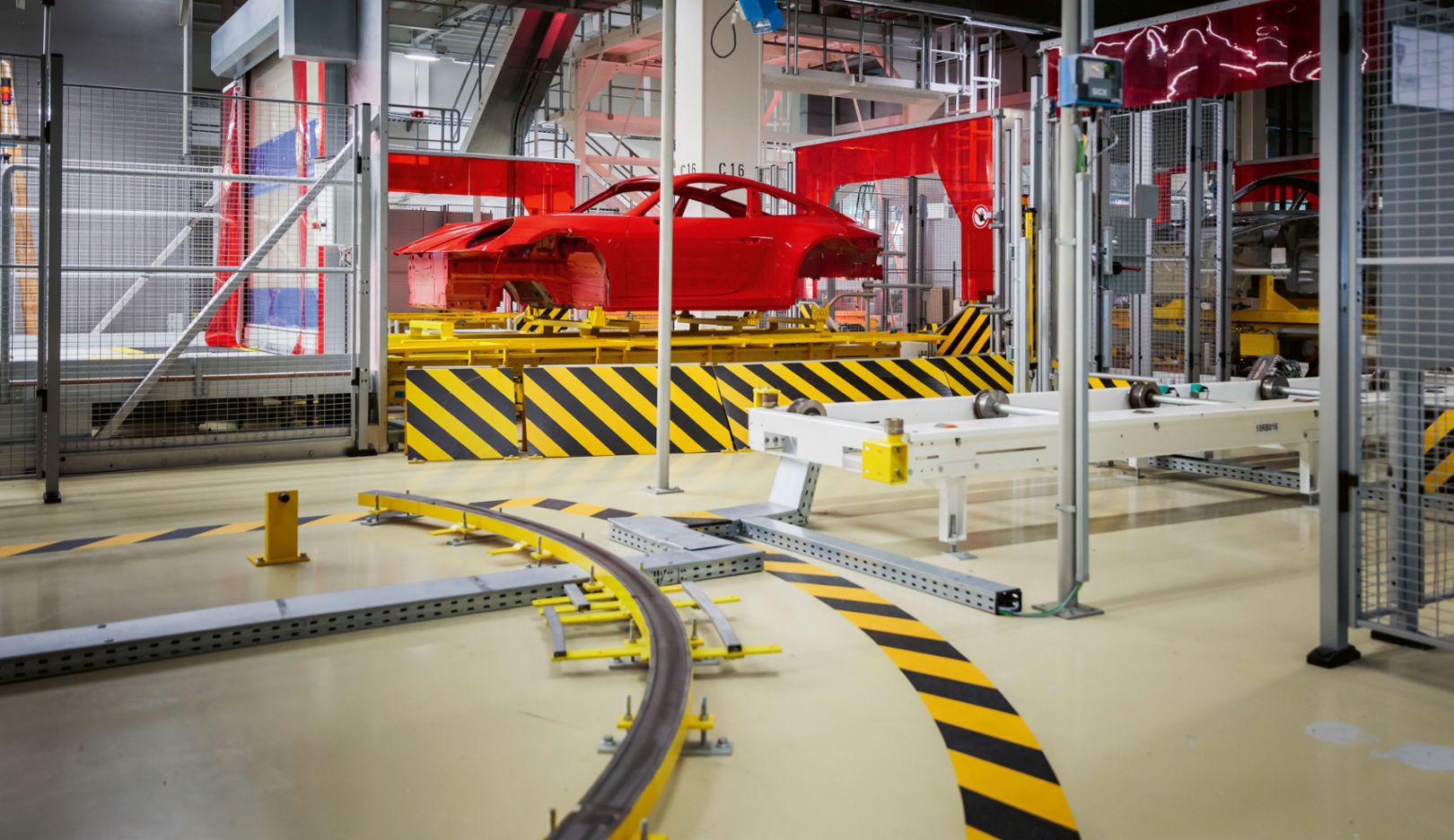 Among the noteworthy events at the Porsche Leipzig location was the production start of the new Macan, which was enhanced across the board in terms of design, comfort, connectivity and driving dynamics. The first unit rolled off the line in Leipzig in August. Introduced in 2014, with over 86,000 deliveries per year the Macan has since become the most popular model in the Porsche product range.

Plug-in hybrids increasingly popular
Porsche ceased building vehicles with diesel powertrains in February of 2018. Previously, they had been assembled at the Leipzig and Bratislava plants – with diesel engines ­manufactured by the group. In September 2018, Porsche announced the official end of the ­diesel versions of the Macan, Cayenne and Panamera. At the same time, hybrid ­models have become ever more popular.
​​​​​​​ 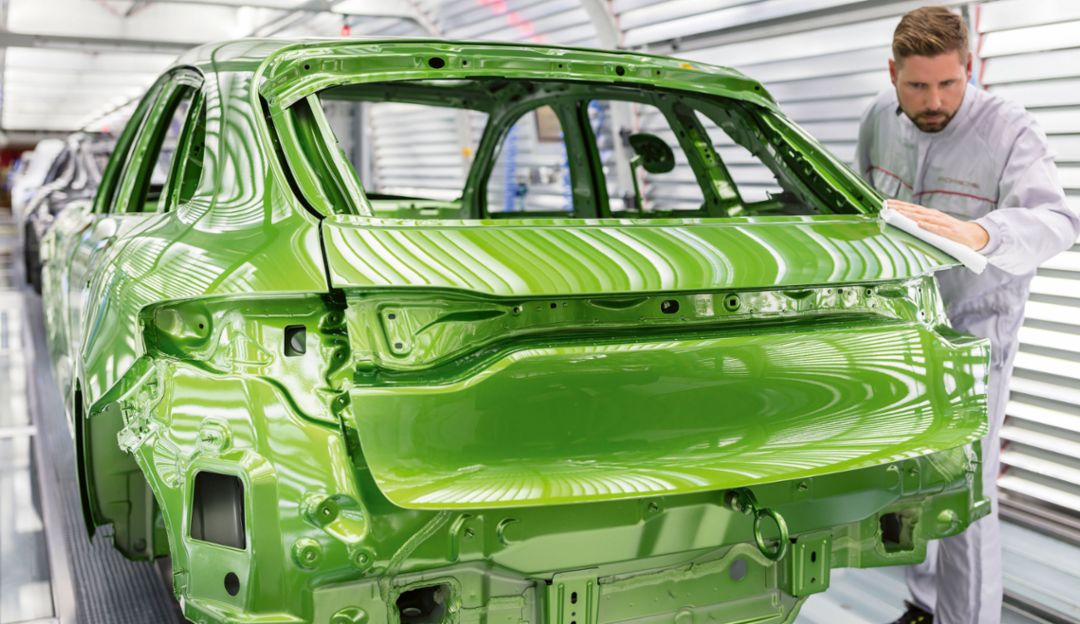 Green Logistics
In logistics, too, sustainable planning and ­control were further advanced in the reporting year as part of the Green Logistics strategy. The strategic approach is characterized by across-the-board optimization. To minimize the effects on the environment and ensure that logistics processes are as sustainable as possible, further measures and potential ­improvements were identified, assessed and implemented in 2018. In the process, Porsche focussed on the fields of transport, storage and energy consciousness.

In view of the increasing traffic volume in urban areas, Porsche is also committed to playing a significant role in avoiding emissions. In the transport department, for example, additional models were added during the reporting year to the electric fleet already in use. At the Zuffenhausen plant, a new electric lorry and an additional e-hybrid one were put into service. Furthermore, a new, electrically powered transporter was used for courier trips between the locations. Through the use of these electrically powered vehicles, the company is able to save 71 tonnes of CO₂ per year. With these measures, Porsche is demonstrating its commitment to further minimising the emissions generated in logistics.

In the transport department, packaging and filling capacities were reduced, which in turn reduced the transport volume.This not only  reduced costs, but also led to reduced annual CO₂ emissions: 22 tonnes CO₂ at the Zuffenhausen site and 26 tonnes of CO₂ at the Leipzig site.

Porsche was able to achieve further improvements in terms of sustainability in the ­transport of new vehicles. For example, models destined for export are transported to the seaports by train. As rail freight traffic is operated solely with green electricity, logistics has been able to save 6,194 tonnes of CO₂ per year.

For the storage of parts and vehicles, Porsche Leipzig has employed resource-conserving procedures and systems. One example of this is the automated small-parts storage system installed at the Leipzig plant in 2018, with some 54,000 spaces for storage containers. Through energy-saving shuttle technology, annual CO₂ emissions are reduced by 40 per cent (676 tonnes) compared to conventional small-parts storage systems. Through improved lorry capacity utilisation, delivery frequencies can be substantially reduced, resulting in further CO₂ reduction potential.

To more firmly entrench this comprehensive approach, a Green Logistics training program was developed. The goal of the training ­programme is to foster a greater understanding of sustainable logistics processes among the workforce. The web-based application is ­accessible to all Porsche employees via the learning platform and takes roughly 30 minutes. Moreover, the training course also ­promotes transparency with regard to current projects in the field of sustainable logistics.

For the production of the 911, 718 Boxster and Cayman, Macan, Cayenne and Panamera, Porsche has been using 100 per cent green energy from renewable sources for the past two years. A biogas power plant at the Zuffenhausen ­location will be added to the environmentally friendly portfolio. The municipal plant will ­generate electricity from the fermentation of bio-waste, optimising the energy mix.

Porsche saves resources in many ways
At Porsche, responsible environmental conduct and use of resources is firmly anchored in the corporate strategy and regulated through guidelines. In 2018, a variety of measures were implemented with a view to promoting a responsible approach to these issues. Furthermore, activities in the area of environmental protection also yield economic benefits. One concrete ex­ample of this is shortened hot tests on test benches, which result in fuel savings. The optimisation of test benches and systems itself makes a valuable contribution to re­ducing emissions. One example has been the retro­fitting of an exhaust gas removal system for welding fumes generated during servicing with new, controllable fans. The new technology enables continuous operation with just half the energy required previously. This amounts to savings of over 441,000 kWh per year at the same maximum extraction level. And it is not just the environment that benefits from the optimised system – it also improves working conditions at the location.

Avoid, reduce, offset: keeping CO₂ emissions in mind at all times
Since late November, Porsche has offered ­customers its Porsche Impact emissions ­calculator. This enables customers to monitor and offset their mileage- and vehicle-specific CO₂ footprint. Based on their yearly mileage, the customer determines their corresponding CO₂ output level. At the same time, the ­customer receives information concerning the financial contribution with which they can ­offset their CO₂ emissions. Porsche Impact is also used in-house: since the end of November 2018, all CO₂ emissions of the entire ­company fleet have been offset. The effort covers almost 6,100 vehicles – including the motor racing models. For a Cayenne company car of the ­current model line with a yearly mileage of 15,000 kilometres, for example, the total comes to 62.70 euros per year.